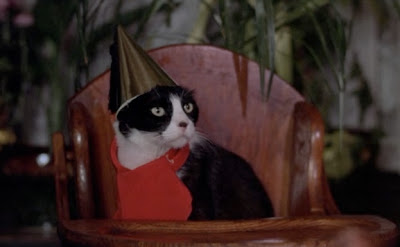 Well, I don't know where you were last night but chances are you missed the biggest party of the summer. Naked girls, lots of alcohol and Puff Daddy really made the night a magical experience. That's right. The world came out to celebrate this blog's very first birthday.
It's hard to believe it's been a whole year already. It seems like only yesterday I was sitting around with no pants on and ruminating the inevitable burden of unemployment and a really really hot summer. On this day last year I decided to get up and do something, so I got up and I sat on the couch and started this blog. This VERY SAME blog. A year later and things have gotten good. Like, really, really good. For starters I decided to wear pants again. After that, I got a job! And before long The Horror Digest began to take off and make its imprint on the horror blogging community.
Along the way I've come to know a lot of truly great people that I am lucky enough to call my friends. And so I dedicate this year to you, my horror blogging buddies and my devoted readers. Without you The Horror Digest may never have seen its first birthday. Without you, it may have died....and even though none of you came to this rocking party that was thrown (I only sent the invitations out 6 months ago guys!) you can pretend that you did just by looking at these awesome photos that were taken by the Paparazzi.
Things got crazy almot immediately when I tried to kill my sister's cat for not being photogenic enough on the red carpet. 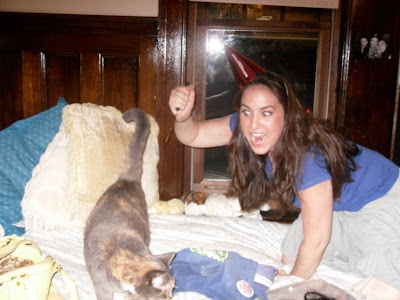 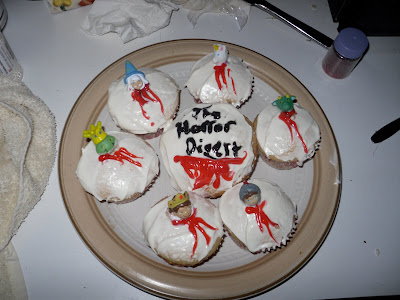 Thanks to a surprise last minute gift by Ace of Cakes, this lovely creation was dropped off seconds before the party began. Look for me on the next episode! 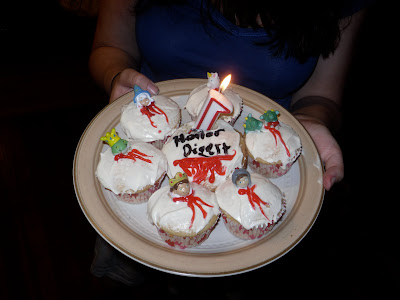 Time to sing happy birthday to the birthday boy. Don't worry about that lopsided number 1 candle it was deliberate... 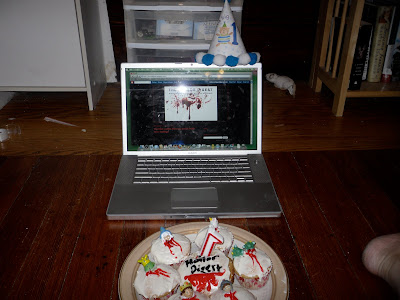 1 year old and already blowing his own candle out. 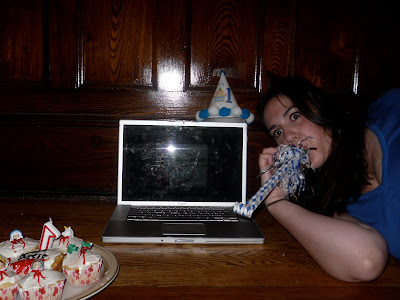 Hooray! Yeah I was pretty trashed at this point obviously. 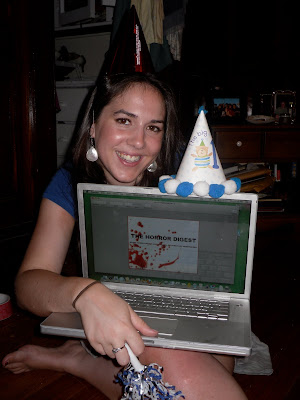 Just kidding. I would NEVER be drunk for my blog's first birthday. That's just bad taste.
Well I guess that was it...Yeah you're right I completely lied to you. You got me! Puffy Daddy was not there and neither was the Paparazzi.
What really happened was this: I paid Emmy Doomas 5 dollars to take some nice little photos of me and my blog on his big day. I made the cupcakes by myself (hard to tell I know) and then I ate all of them. No one got drunk and no was even there. It was just me being lame.
But on a serious note I did happen to make this really awesome Suspiria cupcake. 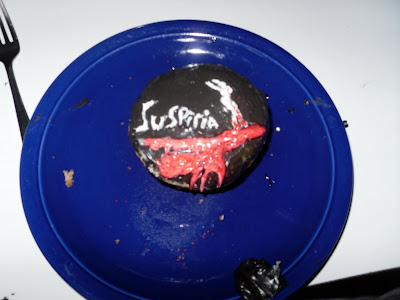 It may possibly be the best thing I've ever made in my life EVER. I also ate it shortly afterwards.
But seriously folks, thanks again for being friends and readers of The Horror Digest. Here's to another year of wearing pants!
Posted by Andre Dumas at 11:00 AM

Happy 1st Birthday to The Horror Digest! It's been a pleasure getting to know you and your wonderful blog over the past year, Andre.

happy birthday! you need to make me a Suspiria cupcake! :P xo

Happy birthday! I can't believe you threw a party with CUPCAKES and didn't invite me or my cats. I see how it is.

Seriously though, congrats and keep it up, pants or no pants.

Suspiria cupcake FTW! "The only thing with more calories than the last two bites of this cupcake--is the first 3-5." ;)

Congrats on your first year! I guess it is only fitting that this is my first comment. What a day for firsts! What else can we do to make more firsts?

(sung to the birthday song)

Who was in Superbad too!"

Congrats and happy first birthday to the blog!

Here's to many more years to come!

(OMG and that Suspiria cupcake...AMAZING!!!)

Happy Birthday! I love the cupcakes!

Yeah! Here's to one more year! AND ONLY ONE.

Happy Birthday, Horror Digest! This post was amazingly hilarious and cat-centric. Keep up the awesome work and hope to see you in many more years to come!

Only a year old? Well no wonder you're so damn prolific! Oh jeez, I feel so much better. You'll poop out in no time.

... Wait, I don't think that was the sentiment I was trying to convey.

Congratulations, Andre! What a way to celebrate a fantastic first year of fear!

For your cat's sake, I hope you have only seven more.

Yay! Happy B-day! Wow, I can't believe it's been a whole year since the HD started--time flies, that's for sure! Anyway congrats Andre, and I hope you'll continue to amuse and entertain all of us with your awesomeness for many years to come!

Happy Birthday to your fantabulous blog, André! Love the pics!

Seriously though, it's been great getting to know you:)

(And it's obvious those pants aren't holding you back.)

Your blog deserves an award so I gave you one. Get it here: http://thegirlwholoveshorror.blogspot.com/

Here's to many more years of your eloquent postings, your fab cupcakes, and your drunken parties!

Congrats! Horror Digest is always a great read, and has inspired me greatly as a writer.

The only thing missing is Beverly D'Angelo flicking her bean.

Yay happy birthday!! Keep being awesome - it's an inspiration to us all.

Party cats wear party hats...congrats! I'm impressed that you have so much content after only a year. I've got a lot of reading to do.

Congratulations I recently discovered this blog and I love reading it. Keep up the great work

Wow, I really need to change up my game and include the pick-up line: "do you know how much i desperately want to bum you off?" when I'm trying to chase tail. Panties simply drop when that statement is made.

I don't think there's any comment I could make that would belittle you more than your own comment, anyway. Except perhaps to say that I do know that line works, having used it on your mother last night. You sir, are an oozing pustule on the cock of humanity. Now do be a good boy, and go beat off to Joanie Loves Chachi. Bye, now!

Well played, B-Sol. I didn't think there was any coming back from being called an (improperly spelled) unimaginative fart. Shit is normally a deal breaker, but you held fast and rebounded quite nicely. Luckily Hamster refrained from calling you a stupid head. There would have been no coming back from that one.

Also, Hamster...bro...what's with the whole girl word replacement thing you do? I don't get it, you're so straight that you can't use any word with man in it, because if you did, a giant cock would suddenly be in your mouth blowing rope down your throat? How are you able to refer to yourself as manly? In your homophobic reasoning you would have to refer to yourself as girl-y, meaning, you are a girl, meaning-meaning, you love dong.

How about balls? Do you avoid the word because they hang under dicks? Do you call football foot-labia? This is all incredibly fascinating to me.

While I hate to acknowledge trolls and validate their existence, I have the strange urge to tell Mr. Hamster to go fuck himself.

Coming from someone that wants to bang a young girl's corpse, such an extensive insult (overcompensating, maybe?) really does a great job of hurting none of my feelings. (Although, I was kind of going for ludicrous. Thanks.)

You sir, are clearly girl-tal.