Lightening Up Part I 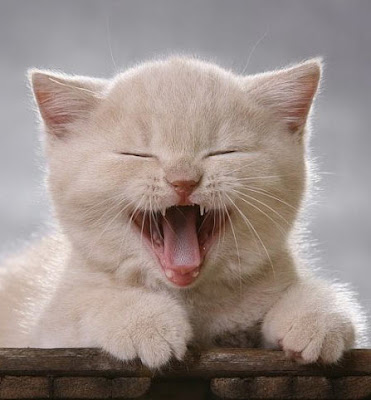 I realized the other day that I have been watching nothing but horror movies for a little over 9 months. Straight laced religious types might instantly dub me an associate of the devil or worse--the devil himself but I'm really just doing my job--er fake job as a horror blogger. I got to thinking, was it possible that all the negative emotions I had brewing inside my head came not from my 2nd job and the worry it caused, but from the over abundance of horror movies in my life? In an attempt to cleanse myself of negativity, I have resorted to watching nothing but comedies this weekend and in true Horror Digest form- movies that I have never seen. You may be surprised that I haven't seen some of these, in fact you may be utterly disgusted and remove me from your friends list. That's okay I have too many friends anyways and the less page suggestions the better.
But the crazy thing. The really really insane thing is that I was able to find at least one startling horror movie reference in each and every movie that I sat down to watch. This could either mean that I have a one track mind and am obsessed with horror movies but it could also mean that horror just has that ability to reach places where it doesn't belong. Horror is everywhere and this little experiment I have done, has proven it.
Sugar & Spice
Okay I lied I have seen this several times, but not in a while and I never realized how hilarious this movie is. Dark, satirical comedies have always struck a chord with me and Sugar and Spice is at times too delightful to pass up. Before I get into the really good horror movie reference that I was surprised to find, let's talk about the wonder. First of all, I'm obsessed with how creepy they look walking into the grocery store

and lining up with their guns inside those boxes.

I love it. Second of all, I always forget that Melissa George is in his movie as the crazy, Conan O'Brien fan, Cleo. It's pretty funny then that the girl that most reminds me of the horror genre in this film is also the focus point for the fantastic horror movie reference/shout out.

Scream 8 may not ever happen, but with all this Scream 4 buzz....who knows. Oh, and I would also like to point out that this movie gets a disappointing rating of a 5/10 on IMDB. Ludicrous. The reviews people have written are also very funny, especially this one:
I wanted to see this movie ever since it was first advertised on TV. I went to Tinsel Town to see it Last Night at 7:40. I regret the day that wasted my ticket on this trash when I could of saw something better. The beginning was all a bunch sex trash and cliches. They exaggerated the way love works in reality. All of the girls were stereo types. The boyfriend was too stupid for his own age.
Exaggerations? Stereotypes? Say whaaaat? This person is right. It's a terrible, terrible excuse for a satire.
Monsters Inc.
I forget why I never saw Monsters Inc. when it came out. I think I was probably in my middle school years and thinking that Disney movies and cartoons were for kids. As it turns out, I didn't enjoy this as much as I think I was suppose to. I love the idea but for some reason I wasn't that excited about it. There are of course obvious horror movie nods- monster's being the main one and possibly the fact that Sully looks like a fluffier and nicer version of Maurice from Little Monsters. 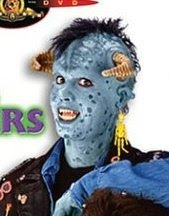 But then there's also the voice of Mike Wazowski's girlfriend, Celia, 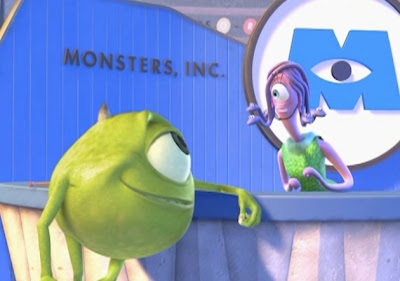 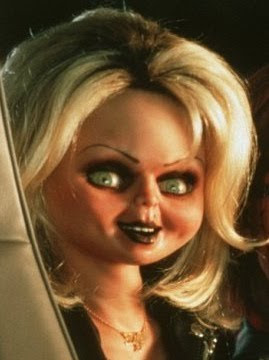 Blues Brothers
I know I'm a horrible John Landis fan if I have never seen Blues Brothers. I know I know. But get over it and let's move on. Typically just watching Blues Brothers and having John Landis in mind is enough to win a this reminds me of a horror movie nod so I suppose that's our biggest one. But then there's also this bill board 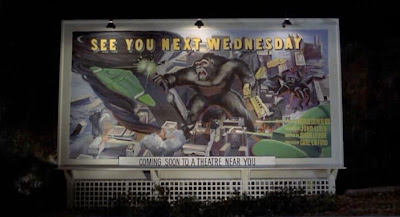 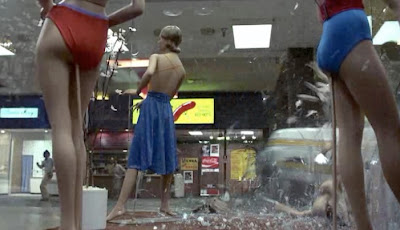 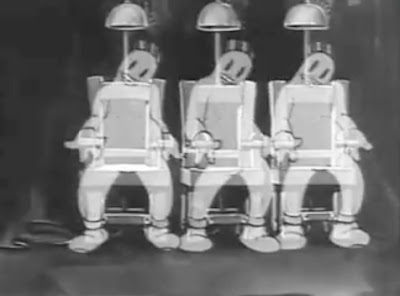 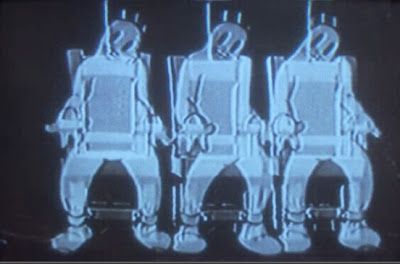 it is a little weird...and creepy. This whole cartoon is surprisingly very creepy... Anyways I love this.
Oh and looked who popped up--Carrie Fisher! 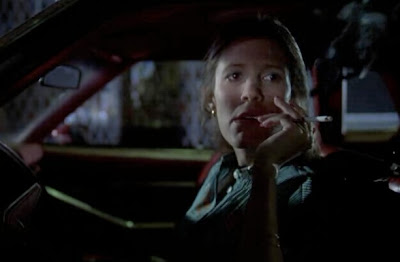 Drop Dead Fred
I've always been at least a little creeped out by this movie. Fred with his red hair and crazy outfits, 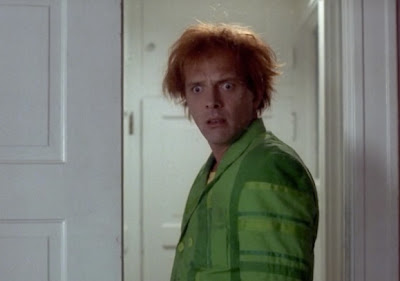 and how mean and scary the mother is- and the kind of weird dream sequence towards the films end. But one thing I don't think I would have noticed if it wasn't for my Return to OZ post is how depressing the movie is when you think about what is actually happening. Sure we are made to believe that Fred does exist in some ways but it's more than likely that Elizabeth has some deep seeded psychological problems. These things of course are implied in the movies overarching theme--Elizabeth has been kept down by her crazy ding bat mother and in an attempt to maintain a friend and to be able to at least somewhat live like a child--she invented Drop Dead Fred who serves as an outlet. A chance of freedom against her mother's strict and scary parenting. Now grown up, she faces those same kinds of feelings when she feels broken by her husband, and the re-admittance of her mother, which forces her mind to bring Fred back.
She of course isn't able to get rid of Fred until she can stand up to her bastard husband and her bitch mother. Plus there are creepy anti-psychotic drugs that play a pretty huge role. So it's more than likely that Elizabeth was doing all those bad things on her own, and that's a little depressing. Of course we need to believe in the actual presence of Fred for the film to work, but that's doesn't mean the thought isn't far from our heads.
And look who decided to show up AGAIN----Carrie Fisher! 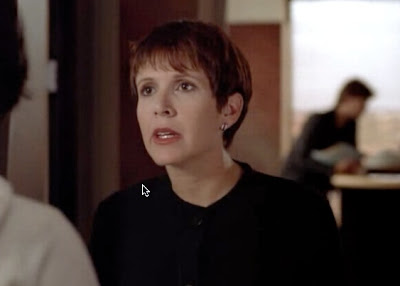 When Harry Met Sally
I've always lied to people, when they say some line from this and go "You've seen Harry Met Sally right?" almost like I don't really have a choice other than to say "yes of course" so I usually say....yes of course. Well it's time to finally check it out. And yes I did only know about the fake orgasm scene, which in context is incredibly embarrassing and hilarious to watch. There are still horror things involved believe it or not. Harry is seen reading Stephen King's Misery, 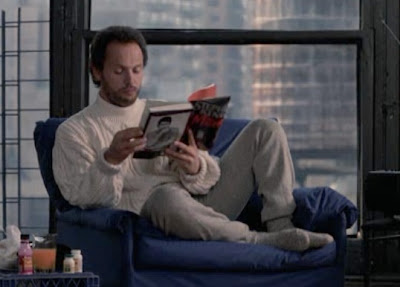 which the director would later direct in a year. And when playing Pictionary, Rosemary's Baby and the Exorcist are shouted out as possible answers. Oh and don't worry because Carrie Fisher pops up AGAIN. 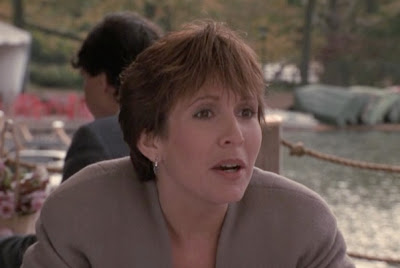 Honestly this woman won't leave me alone. I swear I picked all these movies blindly and she frickin' ends up being in more than half of them. Pretty frickin weird. Pretty weird. Maybe she's like the Dick Miller of romantic comedies?
Posted by Andre Dumas at 2:52 PM

Haha Carrie Fisher sightings don't count when I know she's going to be in them!! It's more fun when it just happens!

Carrie Fisher is GOD! I love that woman - need a quick belly laugh? Pick up her book, "Wishful Drinking". Brilliant!

Oooh thanks Pax, I'm always looking for a quick laugh!

When I watched Monsters Inc. I also found myself slightly disappointed. I liked the movie fine, but I wanted to LOVE it, and I just couldn't find the extreme love in my heart to give to the movie. I did at times find myself wishing I was watching Little Monsters instead.

Keeping with the Carrie Fisher (unintentional) theme- have you ever seen The 'Burbs? I absolutely love that movie- and it is both comedic, and has a multitude of horror elements. It's one of the movies that always makes me laugh out loud no matter how many times I see it!

Man I love monsters Inc. I found it to be incredibly moving, I definitely tear up at the end when they rebuild the door and Sully gets to go through it and yo just hear a soft "Boo." I admit, i'm a big baby.