Noriko's Dinner Table: Where Things Start to Make Sense...Sort Of 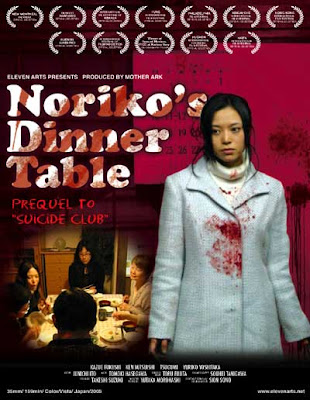 If you recall from my review of Suicide Club, I found at it's conclusion that I was plagued with more questions and concerns than ever. However- those questions and concerns weren't things that needed to be answered indefinitely. Rather, the mystery and it's deepness was pleasing and comforting. I found that there was supposed to be many answers--the suicide club, or circle as it is more fitting, is meant to not be a linear piece of film. Noriko's Dinner Table, is a more psychologically sound film than it's predecessor and it only delves deeper into the mystery. Although an absolute answer is again, never truly accomplished and we are still left with questions... the beauty of it is--that's the best part.
Sure some people may be seething with rage once they finish Noriko's Dinner Table because it is so extremely different. Aside from the fact that it's almost 3 hours long, has very little gore, when compared to Suicide Club---the movie is actually quite beautiful and moving. If you have seen Suicide Club than you may recall that the film gets very philosophical and turns in a different direction at it's conclusion. The scenes with the creepy little children and the girl at the end seem to have a different tone, and that tone is the very same one that I think dominates most or all of Noriko's Dinner Table.
Noriko is a mousy, quiet and under appreciated teenager, who after discovering the internet and the ever so popular chat room--runs away to the city. There she meets one of her chat buddies and is pulled into the very unsettling world of...paying for family members. Noriko becomes part of an agency that allows people to purchase them as temporary family members. A rather provocative and satisfying metaphor when you think of all that "Are you connected to your family" business we heard so much about in the first film. Around the time of the big suicide, Noriko's sister, Yuka follows on her sister's footsteps and joins up with the creepy agency. Their father then--sets off to find out the truth and to hopefully reclaim his shadow-like daughters and atone for his past.
It's hard to talk about both Noriko's Dinner Table and Suicide Club without sounding like a complete loony to anyone that has no idea what you are talking about. But what the hey--I'll just pretend everyone has seen it. Basically-- if you are looking for a Japanese pop group who wears floor length rugby shirts, or an Asian David Bowie who sings the best song EVER--you may be disappointed--but if you appreciate the odd and at some times...embarrasing aspect that Genesis at times evoked, you will be very excited. There is a scene with a dying grandfather that is deliciously strange, awkward and crazy it almost makes you pee yourself.
Even though the movie is entirely too long for me and my attention span--I was still floored by how the movie managed to remain fresh throughout it's entire running time. Sprinkled throughout the film and what feels like a bad case of A.D.D. at times--is a very artistic and beautiful underside. Shadows mean exactly what they should mean- and translate into something even bigger by the film's end. 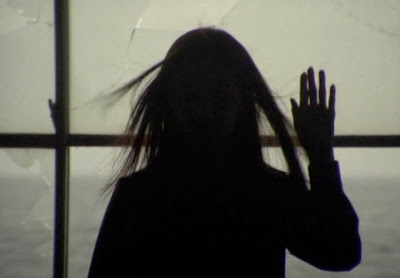 Tangerines hold more meaning than we ever thought possible, and blood makes it's return to something beautiful and terrible at the same time.
Perhaps one of the most intriguing things of all time is Kumiko's flashback to Broken Dam's last night on the job. It was both terrifying and amusing to watch. You think to yourself that there is no way that what will happen will just be OK with all involved--but there it is and it's so unbelivably unsettling and intriguing at the same time that it's....well it's just.....insane! 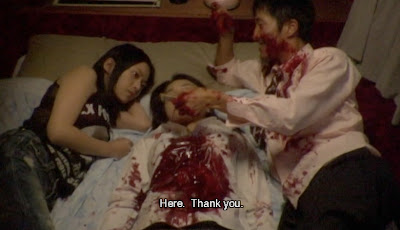 Let me just tell you that I frickin loved that scene. And I loved a lot about this movie but that scene was just too delightful to not talk about.
While the actual connection to the Suicide Club seems almost unsatisfactory-- 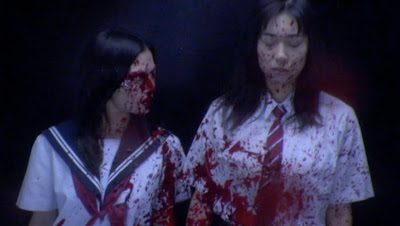 Noriko's Dinner Table as I said earlier provides room for the mystery to grow even deeper, and that is what in the end makes it so satisfying. I realize that this probably makes no sense to any of you but try watching both movies within a week of each other. The confusion only grows but...I like it that way.
Posted by Andre Dumas at 10:15 PM

I watched this about a year and half ago or so and had similar thoughts. Was really taken by it, even despite the fact that it completely defies the wacky-joy mood of the original. It's for those who wanted to explore more of the ideas in Suicide Club, as opposed to the action or horror. I really need to rewatch it.

I keep meaning to watch more Sion Sono (i think) films, but unfortunately, all of his movies are so darn long! I liked Strange Circus after a certain point, but he has a new film that's supposedly brilliant....and 4 hours.

And who are those little kid...the only connection is the rabbit... a kid feed a rabbit in the first one and in the lecture of Beaver Dam in Noriko Dinner Table Lion and RABBIT