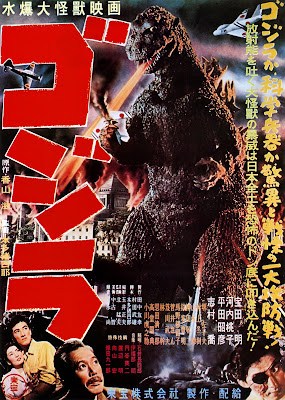 I've always thought I would have a special connection with Godzilla. This is mostly because of my strange obsession with dinosaurs. Let it be known that for 10 years now I've told my friends that I wanted a dinosaur themed birthday party, complete with dinosaur party hats and dinosaur party favors---and I've still NEVER gotten it. It's not like dinosaur party hats are hard to find but...whatever. The point is I love dinosaurs, which means that I would naturally love a movie such as a Godzilla that contains a prehistoric dinosaur living in the bowels of the deep, rejuvenated by that pesky thing called Nuclear bombs. What better way to kick off my Godzilla craze by watching the original and newly restored, complete with English subtitles, 1954 Gojira?
For those of you who do not know the story of Godzilla, or for those of that just wish to be entertained here is a recounting of the plot through screen grabs and subtitles! 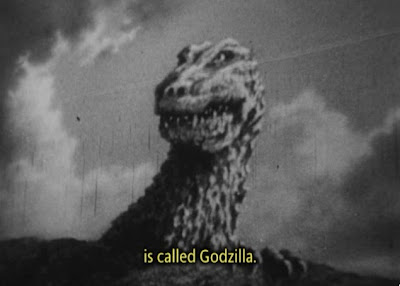 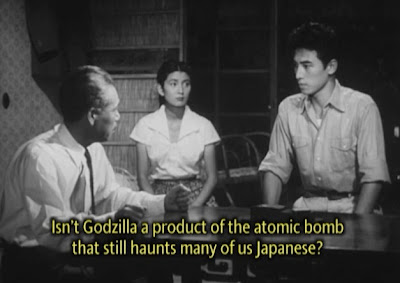 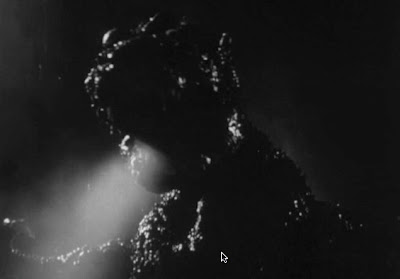 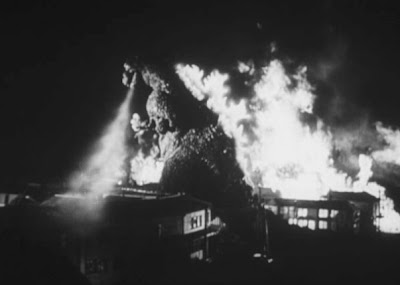 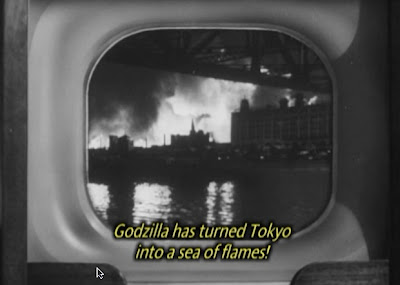 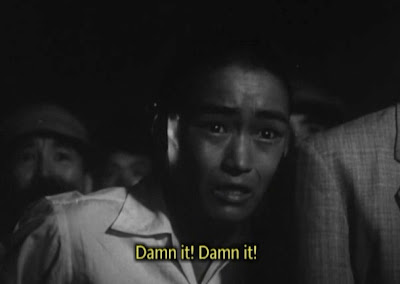 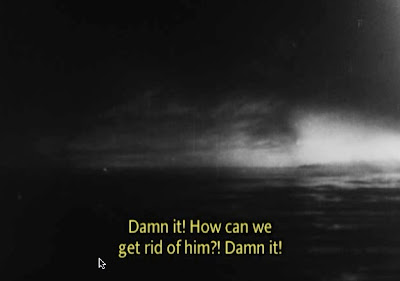 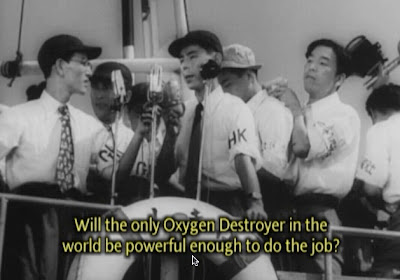 Don't worry, I won't spoil the ending.
I can't remember the last time I had so much fun watching a really old movie with cheesy and outdated effects. I kept scaring/annoying my sister by reenacting Japanese people shouting GOJIRA!!! every 10 seconds. Even when Gojira wasn't around I would still randomly shout GOJIRA!!! Because it was fun. Heck, I just did it while washing my face. But the thing is, even though many have made fun of the effects--I ate them up. I shouted out loud when Godzilla made his appearance over the hill. Yes it was a half joking shouting but a part of me was wowed but how effective that particular reveal was. Not to mention the suit that the actor wore, weighed 200 pounds...AND apparently it was not uncommon to retrieve a cup full of sweat between shoots. Blagh.
I also loved how we got our action straight away. No nonsense love story before the good stuff--just straight up boats blowing up for no reason and gigantic footprints plaguing the coast. Brilliant. To top it all off...the foot steps of Gojira ECHO in your ears before the credits begin to role!! Like seriously, they pound your soul.
Pure brilliance. And don't forget how simply wonderful the film's score is.
What is it about this theme that I love so much? It sounds like something out of a Hitchcock movie and I may even be detecting early signs of some John Williams pieces. Of course I wouldn't be surprised since he did also steal the jaws theme from The Phantom of the Opera. But anywho I never expected to become such a fan girl of the theme from Godzilla, but look at me now.
Another moment of surprising brilliance; the shots of the all girls choir singing intermixed with shots of the aftermath of Godzilla's seemingly nuclear destruction. 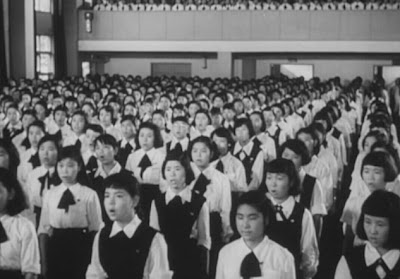 An eerie remembrance from the days of Hiroshima and Nagasaki. I've always been immensely interested by horror films that play so well to that decades fears--and nuclear warfare was certainly still on many people's minds. Godzilla in himself represents not just nuclear war but the after effects of it. 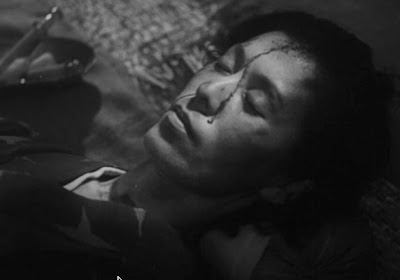 The film's last few lines are so telling, in that they warn of the possibility of Godzilla not being the only monster that exists. If we are not careful, another may rise, anywhere in the world and begin destruction once more.
I was also floored by the weight of the situation at the film's conclusion. Two enemies, turned partners, venturing off to the bottom of the sea to kill Godzilla? Then watching Serizawa tell Ogwata to be happy with Emiko, and he cuts his cord!! That is some Armageddon shit! I loved it. I loved Godzilla so much more than I ever thought possible. Clearly me and mutated dinosaurs are mean to be together, so why is the world keeping us apart?
Posted by Andre Dumas at 9:33 PM

Well if you know me at all, than you know that you're speaking my language! I eat, drink and breath Godzilla, and the original one--the Japanese version of the original one--is one of my favorite genre movies of all time. It really is a horror movie, so much more than the goofier later movies. Parts of it are downright hellish--and yes, it may have one of the best opening title sequences ever.

Don't be ashamed of loving the effects, Eiji Tsuburaya was a master. His stuff was pretty ingenious, especially in this movie. And Akira Ifukube's score is just as important to the movie, as like, the themes to movies like Star Wars, Rocky or The Godfather are to those movies. I proudly own it!

Gojira is a masterpiece. The musicby Akira Ifukube is awesome. In the American version with Raymond Burr there are two mistakes said in the film about Godzilla's size. One character says hes 400 feet tall and another says hes as tall as a 30 story building or 300 feet tall. Not so. The original Japanese version gives Godzilla's true size as 50 meters or 164 feet tall. Dr. Serizawa's oxygen destroyer is a horrific weapon and in 1995 is brought to attention in Godzilla vs Destroyer where Godzilla fights a crab like monster who morphs into a hulking bipedal demon called Destroyer. Destroyer is revived and mutated from the oxygen destroyer and Destroyers origin goes back to the Precambrian era 2.5 billion years ago! In the 1954 Gojira Dr. Serizawa demonstrates the horrifying power of the oxygen destroyer on two occasions. On a small scale he destroys an aqarium full of fish and on a large scale he uses it to destroy Godzilla in the ocean and himself. Dr. Serizawa dies with Godzilla. Godzillas body is turned into a skeleton. The movie is dark and deadly serious. The Godzilla costume from this 1954 movie is one of the best. See Godzilla vs Destroyer which has alot to do with the original 1954 Gojira.