Evolution of a Fear: Andre and the Shark.

When studying abnormal Psychology in college, we were shown a video of individuals who suffered from extreme phobias. Fear so great that it at times caused a paralysis within them--fears of things like snakes, needles, heights and... midgets. Oh wait--that was actually an episode of True Life: I Have a Phobia. BUT the point is I've often wondered just how these types of fears get started within us. Sure I could probably go to a psychiatrist and have them tell me that my fear of sharks is a subconscious reaction to the weight of my everyday life and how I let my emotions devour me but what's fun about that? So today I have decided to take a look at just where my irrational fear of sharks came from. Using my extremely good memory, I am going to examine just where this began and take a closer look at how my fears evolved and grew as I got older.

I'm sure you know by now that this fear is a large one. The fear that even today causes me to scream and get upset just by looking at a shark on TV. Yes, JAWS is probably the biggest offender but a deeper look into my memory brings back a startling discovery. When B-sol did his post about scary art work, I suddenly remembered the piece of art that plagued me as a child. Sometime in my early early years of life, I took a trip to the Museum of Fine Arts. Looking at fine art as a child should be boring- and I'm assuming it was. The only thing I can remember about that trip however was stumbling upon a rather large painting titled Watson and the Shark. And look at that! Here it is for you all to see. 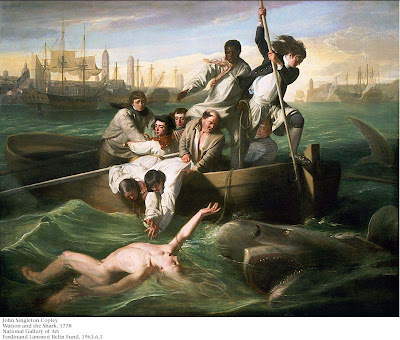 I think it's safe to say that this was the defining moment in my ultimate fear of sharks, and hopefully it's pretty easy to understand. Putting aside the fact that this dude was naked, the shark and it's gaping mouths stopped me in my tracks. Actually the funny thing is, I remember there being more than one shark- but apparently memories DO deceive. Anyways I remember standing there transfixed by the look of anguish and terror on Watson's face and on the hopelessness of the situation. It was the first memorable instance of my uncanny ability to imagine myself in the same position, as well as my first experience with being too terrified to look away from something.

After this incident there was of course the obligatory accidental viewing of JAWS. I was probably innocently coloring in a Beauty & the Beast coloring book, when my Dad decided to watch the great movie that is JAWS. A chance look at the screen was all I needed to hammer home my great and powerful fear. After this I took on a strange fascination with the movie, which involved hiding behind the couch and secretly watching it at my older sister's sleepover or watching the entire movie underneath a blanket, alone and pretending to be brave. I've still never seen the entire film without being behind a barrier of some sort--and that's pretty messed up.

After this came the dreams--walking in an aquarium and seeing a shark the size of a truck in the tank, then running in terror as he started to break through the glass. In another, I was on a cruise liner in stormy seas and looking below to see 3 enormous great whites ready to swallow me up the moment I flew over the sides.

At the age of 12 I was back at The Museum of Fine Art. I told my Mom that I needed to see this painting, but all I could remember was that it was big and had sharks. The museum guard smiled the moment we said sharks. He told us just where to go and soon I was face to face with the inception of my fear once more. This time, I could read and the words "actual occurrence" stood out like a sore thumb. In one of his most famous pieces, John Singleton Copley depicted the rescue of Brook Watson from a shark attack in Havana Cuba in 1749. Watson was a 14 year old boy working on a trading ship when he decided to take a swim. Watson was apparently attacked several times by one individual shark. According to my friend Wikipedia;

On its first attack, the shark bit off a chunk of flesh from Watson's right leg below the calf; on the second attack, it removed his foot at the ankle. The crew of a small boat, who had been waiting to escort their captain to shore, fought off the shark and rescued Watson.

Although Watson did survive, his leg had to be amputated and the incident goes down as the first recorded instance of a shark attack. Perhaps this should have allayed my fears, but I think it got worse from then on out. Now even pretending to watch JAWS wasn't an option, I had switched from hidden fear to full on paralysis. A second viewing of the painting only confirmed what I had feared-- sharks were capable of making me cry. Bastards.

Later on in my life nearing 20 years old, I sat in one of my boring literature classes and flipped ahead in my textbook to waste some time. Suddenly I looked down and saw with horror that Watson and the Shark was splayed across one of the pages, no doubt connecting the themes of whatever time period the books we were forced to read came from with the art coming out at the same time. There I was once more face to face with the bastard, and I realized not much had changed. I think I can honestly say that if I was able to stare at that painting for hours, I would do it, no problem. There's something so utterly horrifying about the painting and something powerful too. With the combination of the painting, and the horrifying images from JAWS it's safe to say that my fear of sharks will be ending no time soon.

I still have dreams, dreams that reoccur in the brief time span that they exist. I know exactly what will happen, because the same dream just happened 2 minutes before. Stuck in the water and waiting for that giant mouth to come screaming out of the water--paralyzed with fear just as powerful and real as the fear coming from Watson's very own face. 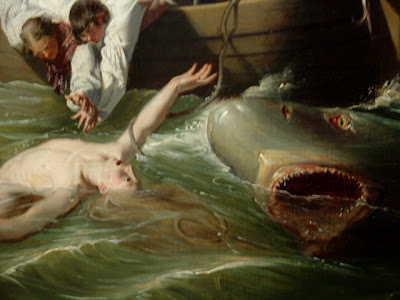 Labels: Evolution of a Fear

Your post is much more interesting. I liked it.Thanks.

If I may add to the words of wisdom from Hyderabad Escorts, I also enjoyed this post very much. My kids recently got their very own "accidental viewing" of Jaws thanks to my somewhat flighty in-laws...Looks like I may be raising a couple of future Andres!