My buddies Mike and Chris of All Things Horror have been quietly doing something very important in the horror community in Boston. Every first Wednesday of the month, they hold All Things Horror Presents at The Somerville Theater, in which one feature independent film, and independent shorts are shown. This is important for two GIANT reasons 1) it brings horror fans together in Boston and 2) brings to light some truly awesome films that most people would have otherwise missed. I've always looked sadly over at all the Chicago horror fans and thought how nice it would be if cool horror things happened in Boston as well. In fact, there was a brief period of time where I thought I was the only horror fan in Boston! Where was everyone hiding? My fears were allayed when I met Mike and Chris as well as some other Boston horror fans that came forward through email in response to my blog. Plus with every month, there seems to be a bigger and bigger turnout at All Things Horror Presents. Look out Chicago, Boston will soon make a splash in the horror world. George A. Romero DID come here after all a few weeks ago so.....yeah.
So get ready because the most anticipated screening event is about to happen. On June 2nd and starting at 7pm and for only $5.00-All Things Horror Presents it's Women in Horror Film Program! The feature presentation is none other than Elizabeth Fies feature, The Commune- 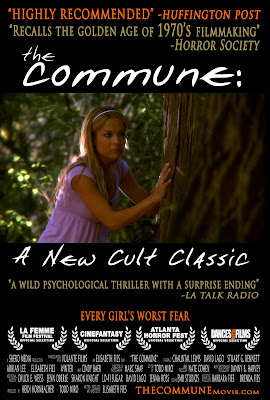 which has received praise upon praise by seemingly all that have reviewed it--especially one Ms. BJ-C of Day of the Woman.

The shorts will include; Snuff and also Hollywood Skin by Montreal filmmaker Maude Michaud, Gimme! by Monica Puller of Gonzorific (Thank you the Scare-ening for introducing me to Gonzorific) and finally Fantasy by Izabel Grondin.

For more information on all the films check out All Things Horror, and don't forget to get out and there and support both women in horror AND independent film!
Posted by Andre Dumas at 9:06 AM

Ugh, I've been trying to figure out how I could smuggle heroin to get a free flight from LA to Boston so I could meet you all, but alas in the economy no one is hiring newbie mules!!! Unhappy face...

Yay! well you'll be there in spirit most definitely. I'm so excited to finally see it!

I also just realized your name is spelt wrong in the press release I got...must change!

Awww thank you! i don't usually sweat the first name, as long as the last name isn't Flies or Fries hahaha...

Thanks so much for the support Andre, we can't wait to see you there.

lis-don't sweat flying over, we'd love to have you on hand, but we're small potatoes. Save your dough for the important things- like recreating the Hindenburg disaster using legos

Thanks Mike! I do have a naked man to kill in the shower next week (on camera), so I should be preserving my resources...

is it a naked american man that stole your balloons?