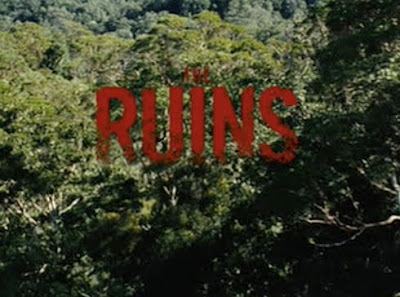 I didn't know a whole lot about the Ruins before watching it. My breadth of knowledge came from the fact that a newspaper holder at UMASS had been carrying the poster of it for at least 2 years after it was released. I always assumed the film had something to do with ancient Mayans and hopefully some aliens and maybe a crystal skull. Lucky for us all, Indiana Jones was able to satisfy our needs for that plot 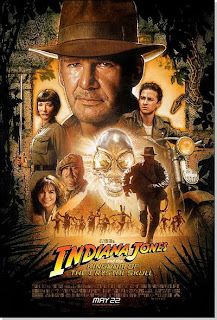 and so all The Ruins has left to conquer is.....the plants. Yes the Ruins is about plants, and as much as I'd like to see some ancient Mayan curse and ancient Mayan demon gods or whatever--that just ain't happening.
Our film starts off much like the likes of Hostel or any movie where Americans are traveling some place and get into trouble. Our 4 main characters are in Mexico and meet a mysterious man who prompts them to visit some uncharted Mayan ruin with him. He says that his brother is there and has not yet come back, so he MUST be having "fun". Who has "fun" while pillaging around Mayan ruins? Oh right nobody because everybody's DEAD. The group takes off and after a confrontation with some locals ends badly with some arrows and a gun shot- the group flees to the top of the Mayan pyramid. There they find what happened to the others, as well as some plants. Some really mean plants.
I wouldn't say I liked The Ruins, but I also wouldn't say it's a terrible movie. It just so happens to be a movie that came along in the years of gross out gore and Hostel like boundaries. It's a movie that doesn't serve any purpose except to make you uncomfortable. I would never see this again and that's because it leaves me feeling empty and gross. The gore is ridiculously nasty--and really makes you wish that crazy people could be kept away from all sharp implements. Other than the gore however--there isn't anything truly upsetting or terrifying about this, and I think that's where I lose interest.
I find it very hard to feel terrified during a movie if the premise is absolute bologna. I don't fancy myself venturing off to uncharted Mayan ruins or being taken over by plants that have a recording device stashed away in their stamen. The moment that it was revealed that the plants were what the locals were afraid of (which is pretty early on)---all horror went straight out the window. This is of course also due to the fact that the plants were largely CGI plants. 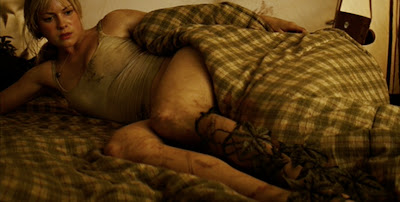 Ooooh scary. This isn't to say I don't find all plant movies terrifying. Invasion of the Body Snatchers is scary but for some reason, these plants and this premise just completely bothered me. I found it boring, lame and at times utterly ridiculous. Once you find out that the plants are capable of getting you by any means and that the locals will not let our main character's leave, we pretty much know the outcome--and what is fun about that? 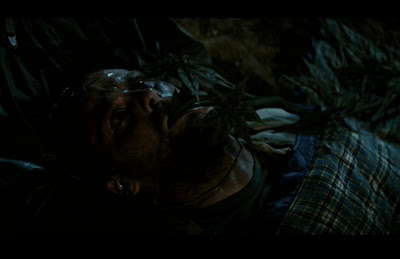 These plants left no room for survival and it pretty much means that we are left to sit there and watch gore for the duration of the movie.
That being said, the gore is pretty horrific in it's own right. That, I will give it. There were moments where I completely dreaded what was about to enfold and what enfolded was awful. There's something about flesh being cut into and fingers stuffed inside that just screams barf bag. The leg amputation scene was also pretty horrific. As was Stacy's self mutilation scene----including bits of flesh hanging off and such....bleck! 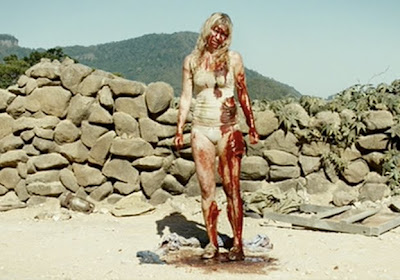 Of course I am not one to like a movie just because it has gore in it---in fact I don't even like gratuitous gore so once again I find myself less than thrilled.
The character's were also... not too exciting. Jena Malone's character was completely unlikable (STOP taking pictures you biotch) and to have her be the final girl? Puh-lease. They were boring, and although the last few deaths were a tiny bit heart wrenching, I didn't really feel enough to even make a sad face. It was expected. It was boring. And it was just not entertaining.
Overall I just wasn't pleased. I had heard a lot of positive things about this film, mostly having to do with it's underrated-ness, which typically means that I will not like it because let's face it--I only like what everyone else likes. The bottom line here is that I didn't feel like I had anything invested in this. I didn't care about characters, I didn't fear the plants, and I really hated Jena Malone. I guess I just wanted some good old fashioned Mayans, or some kind of Mayan curse to happen. I wanted them to actually go inside the pyramid and be hunted by a demon or SOMETHING, ANYTHING but some lame ass plants.
Posted by Andre Dumas at 6:13 PM

what a shame. actually sounds like a great story per se. bring me sam raimi's evil dead trees anyday....

No killer plant can compete with Audrey II

Igor is right. Audrey II could have swallowed those damn vines for breakfast and then sang about it!

The plants mimic voices and cell phones?!?! jeez that was a WTF moment of the last few years

For real...lamest thing I've ever witnessed. Are we supposed to believe the flowers mimicked Mayan's cell phones back in the day....oh wait they didn't have cell phones. PLOT HOLE. ; )

Killer plants? Didn't M.Night do that as well in The Happening, lol. Makes me want to treat my roses better before they wipe me out, lol
love your site, hope you will check mine out as well
Petunia Scareum from Deadly Serious

Wow, I'm surprised you were so underwhelmed. I really enjoyed this one, aside from the rather dreadful CGI plantery. I dug the unlikableness of the characters because it felt somewhat new--not that they were annoying, but that as an audience, you kind of expect Jena Malone to be the good sweet final girl and her boyfriend to be so loving, yet their dynamic is far more complicated.

Also, even if you dislike the film, I would highly recommend the book.

It's true I hate plant movies! But for realz, I think my dislike has more to do with the fact that the "horror" seemed to be found more in do-it-yourself medical procedures and less in things like atmosphere and legitimately horrifying things. I do appreciate the roles reversal now that you mention it- but I still hate them! It's kind of like distracting to me to really not like anyone and that is problematic. So you see, it's just my personal taste preferences. Kind of like how I like onions and you don't!! We were doomed friends from the start.... : (

I actually enjoyed this movie quite a lot, but I can see where you're coming from. Plants as the horror antagonists does sound pretty bad, but hey, I though it worked quite well in this film.

By the way, I feel like I have to mention this. I had no idea what "The Ruins" was about when I watched it, and I still couldn't figure out that it the plants that were causing all the terror until they actually showed them.

I remember watching this a couple of years ago and rather liking it. Of course, the notion that Ben Stiller produced it threw me for a loop. Still, it's not what I'd call a classic, but the tension and scares were surprisingly effective. I was expecting some very by-the-numbers teen horror, there.

I keep meaning to read the book to see if it's any better.

Eh, I started reading the book the other day, and while it's a fast read, I hate all of the characters. They keep making the wrong decision at every point. It could have been a good short story or Twilight Zone episode, but not a five hundred page novel.

Caught this in the theaters on a whim and was pretty impressed. The characters were not quite as cardboard cutout stupid as most are in these type of films. Thought the reaction of the natives, as they drove the kids up the Ruin and watched over them making sure they couldn't escape was uber scary and well done.