Attack of the Killer Tomatoes: Ooh the Days When Tomatoes Were Still Vegetables...Sigh. 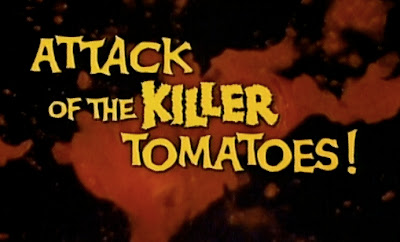 I'm not sure if you're aware of this or not but there's been a lot of good movie watching at The Horror Digest. Not that there's anything wrong with that but personally I think it's getting a little out of hand. If you only subject yourself or your blog to good movies then one day when you're feeling saucy and want to talk about something like say I don't know...Wild Things--then people will start to get upset. But if you balance it with both good and bad no one is thrown for a loop and no one will get upset. Everyone's happy when you keep a balanced level of absurdness and delight. So in order to purge my blog of that dastardly disease, I went for the big guns. One of the most notoriously bad movies out there. But is it so bad that it's good? Let's find out.
Beginning with a small anecdote of when people first saw Hitchcock's The Birds-- 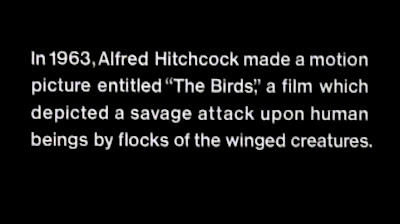 I found myself wondering; should I be concerned about the tomato I had recently purchased? Or because Attack of the Killer Tomatoes is supposed to be funny and the Birds was not- are we all safe? Unfortunately for all you deep, movie trivia and fact snobs out there the first rule of Attack of the Killer Tomatoes is don't ask questions. There will be no rhetorical questions today. In addition you also should be careful not to think too hard, or try to make sense of what you see before you. Attack of the Killer Tomatoes is what it is, a parody of a B-movie that becomes one in the process. This of course leaves little to talk about. Which is fine by me.
Within a few seconds into Attack of the Killer Tomatoes, and witnessing a rolling tomato appear out of a garbage disposal and start making "angry noises" you start to understand that 1 out of every 50 people you meet will find the film enjoyable. Sure there are jokes--but how many people these days can appreciate full fledged silliness? I'm sure all those girls in their high heels and undoubtedly stylish rompers that I met last night would be rolling their eyes and switching to The Real Housewives of insert city here had they been in my shoes--but lucky for you all I love me some silly.
I was also very surprised, although I'm not entirely sure why, that the tomatoes didn't have any teeth, they were just tomatoes. 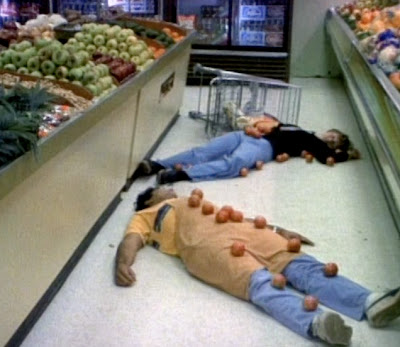 This is fabulous. Instead of trying to understand how anyone was killed by a savage tomato with no teeth I found joy and excitement in the fact that money was spent on explosions instead. Good move I think because after all how many people can make a savage tomato look convincing? Oh shoot! A rhetorical question...blasts!
Sure, half my time was spent being terrified that the film would suddenly turn into a porn--I think most of us expect that with films made in the 70s, but the other half was spent smirking and admiring the shiny luster of those gigantic tomatoes. 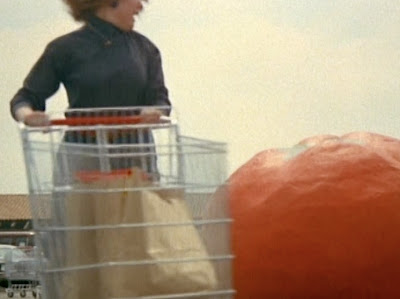 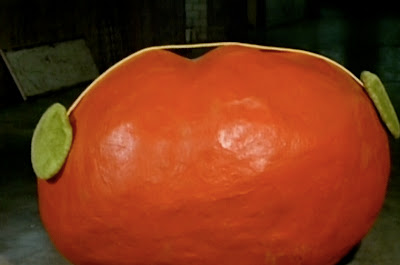 While there may be no outstanding message or social commentary other than the fact that wearing a bra is essential and that a black Hitler is GREAT, Attack of the Killer Tomatoes is really just silly. If you can't appreciate the silly and don't find that a board room the size of a cupboard is funny then get out! Go back to your intelligent comedies (whatever that is) and find a new friend. No, Attack of the Killer Tomatoes is not that funny--but if you can't appreciate it, even for a second then I still feel like you're missing out on a little piece of life. Most likely laughter and the joys of silliness but who am I to judge?
Here is some silliness: 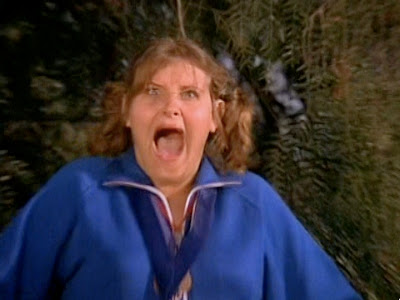 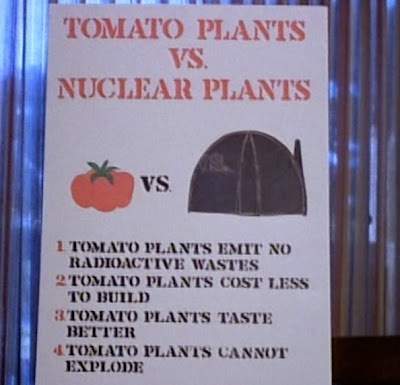 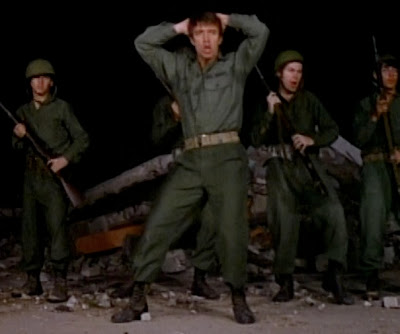 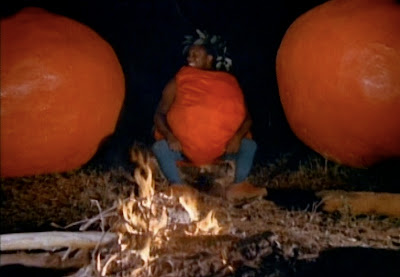 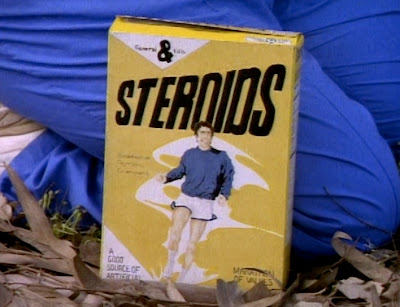 Yes, I suppose going back to the film's opening message we are supposed to draw a conclusion after all. Take nothing seriously---and you'll get out alive.
Posted by Andre Dumas at 9:45 PM

Oh man, I always thought the killer tomatoes had teeth too!! The movie poster for this is so misleading! But money spent on explosions vs. making killer tomatoes with teeth was probably the right choice! It's funny just to think about ordinary tomatoes attacking people (even if they grow to monstrous sizes!)- I guess I should be extra careful in the produce section of the grocery store today!!

This movie looks amazing, and those screenshots seal the deal for me- I'm adding it to my Netflix queue ASAP!

I rented this from netflix, I kind of enjoyed it.

Andre, those are tomatophones. Don't be so anthropocentric.

Love this series of films. I own all 4, yes, ALL FOUR on dvd, with Return of the Killer Tomatoes on VHS.

Ugggh I'm such an amateur, tomatophones bah! Forgive me : (

Zach that is pretty awesome. I don't think I was aware there were others aside from attack and return! Are there subplots? Does the story expand? Do we find out more and more about the lives of the killer tomatoes????!

I have "Puberty Love" on my playlist today.