Dog Soldiers: Umm Thanks For the Letter Opener...But On Our Camping Trip? 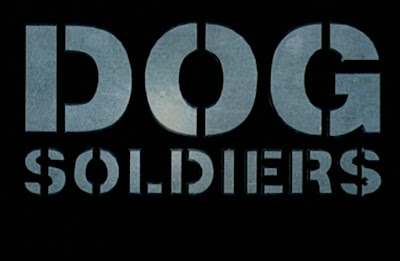 There is nothing beautiful about Neil Marshall's Dog Soldiers-- and with good reason. A war movie with werewolves has the unique ability to remain bloody and gruesome with some added pep and terror from a refreshing tribe of werewolves that have nothing to do with CGI. Yeah I might be running on in my sentences--but I have to if I'm going to talk about werewolves AND soldiers. I've always been quite wary of war movies for more than enough reasons. For one, the anticipation of the battle scenes loom over my head for the duration of the film, and in some cases, well after I view it. These films have the uncanny ability to deeply concern your life and emotions with the characters they are showing you. This makes certain deaths unbearable to say the least, and sometimes, like when you are obsessed with Morgan Freeman, you would rather DIE than know that a certain battle will claim his life. 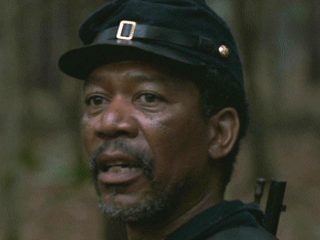 Sigh.
But because Dog Soldiers combines the war genre with the horror genre, this dread diminishes slightly. Dog Soldiers follows a group of soldiers during a routine training exercise. After they happen across the violent yet still alive remains of the sergeant of special forces, the group becomes under attack by some growling beasts. After being saved by a woman and taken to her secluded house in the woods, the group soon finds that they are up against a very violent, and no nonsense group of werewolves.
One amazing thing that I can't seem to get over when thinking about the film- is how well it tackles both genres evenly and thoroughly. While many would think that brutal, gory violence is something oft seen in horror, one must not forget that it is the war movies that portray the real, nitty-gritty, down and dirty, completely disgusting and raw elements of gore. I've always found it funny that people get so down on horror movies for being so gory and violent when war movies are the most violent kind of film out there. In fact, I'm willing to bet that the extent to which the gore is shown in this film is brought on by the war movie side and NOT the horror movie side. 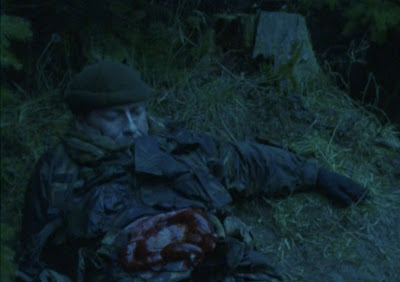 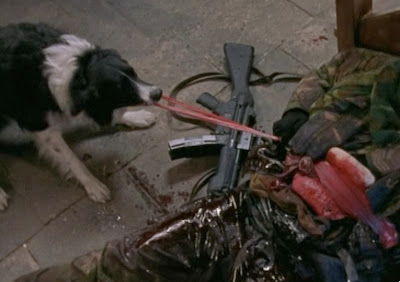 I have to say I loved the quick shots of the werewolves when things were still a bit dodgy there in the beginning. 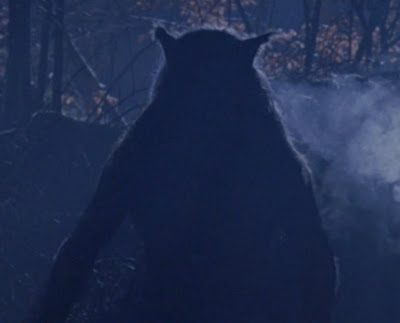 We don't get a full on shot of the werewolves until later but those quick snippets really fill you with excitement and anticipation for the moment that you may lay your eyes on those beasts. And then of course later when we get up close and personal with them, you are floored (or at least I was) by how great the makeup and costumes are. 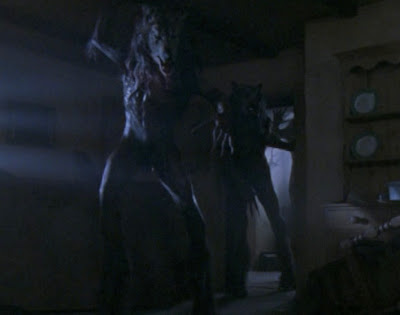 Their unnatural height, great snarling mouths and long and hairy arms really do tend to frighten you. There is not a trace of terribly done CGI gore or wolf movement and it is extremely appreciated and even makes me a little giddy. It can be done folks!
While I did get continually frustrated by the barrage of gun fire continuously fired at our unstoppable beasts I did tend to ease up after I remembered, it IS a war movie after all. A war movie that retains the ambiance of a great horror movie--and even refreshes the werewolf genre of horror. But still---get some silver bullets already.
Perhaps my favorite thing however, is the stunning discovery that Dog Soldiers plays out just like All Quiet on the Western Front. After a while you come to realize that you're really just killing each other. Forget sides--werewolves were men once, and not only that--some of them were even former soldiers! A war/horror movie that provides commentary on the ridiculousness of war, while still being insanely entertaining AND thought provoking? It's crazy man.
Posted by Andre Dumas at 10:15 PM

I've been putting this off for quite some time now, but damn it, I wanna see it!

That's funny, I was putting it off for quite some time too and I'm not entirely sure why! Definitely check it out I think you will fall in love.

My all-time favorite werewolf movie. And agreed, this film proves that great costumes and practical effects can be done. CGI be damned!

"I hope I give you the sh*ts you f*cking wimp!"

haha, I totally forgot about the line anonymous posted!

rivals the "choke on em" line from Rhodes in Day of the Dead.

great post, Andre! It does tread the fine line between war and horror very well, and isn't war the epitome of true horror after all?