Dark Night of the Scarecrow: I Made Up At Least Two Words In This Review 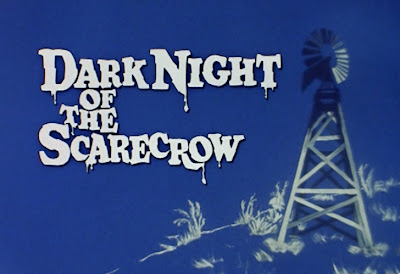 Way back when Dark Night of the Scarecrow finally became available for people to buy on DVD, I put it on my queue. Why not I thought. Who doesn't love a good scarecrow movie? In fact, it is my firm belief that scarecrows get the shaft quite easily in the horror world. This is a right shame because scarecrows are pretty terrifying. No matter how cute or funny the Scarecrow in the Wizard of OZ is supposed to be, he's still a scarecrow and therefore scary. 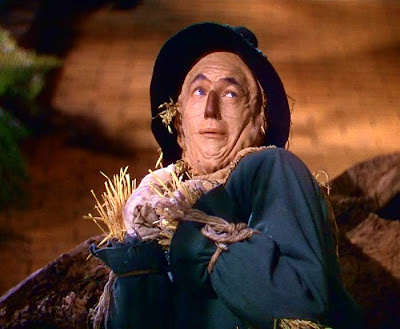 Understand? Scarecrows are not to be messed with. Typically scarecrows come alive to kill people or worse--stalk them until they die in some other horrible way. Is it really a coincidence that the two most popular scary kids shows each had an episode devoted to scarecrows? No way.
This is why I was terribly excited to see Dark Night of the Scarecrow. I didn't know too much going in, only that it was a made for TV movie and that there was most likely a scarecrow involved. What I found upon viewing it however was that it's actually a much better TV movie than most all TV movies. That is a bold statement considering I've seen about 3 made for TV movies (One of them is 15 and Pregnant which wins every time) but just go with it. Dark Night of the Scarecrow doesn't feel weighed down by cheesy made for TV dialogue or real life issues. Sure it's light on actual scares and blood but hey--it's TV!
Bubba Ritter is one of those 36 year olds who has the mind of a child. 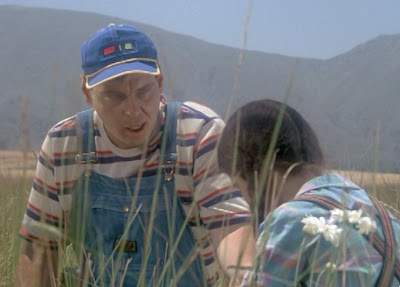 He finds comfort in playing with the children whom he sees as nothing less than his equals. The townspeople do not approve of this. Most notably this is the evil mailman Otis--who has now joined ranks amongst the other villainous mailmen of the entertainment industry. 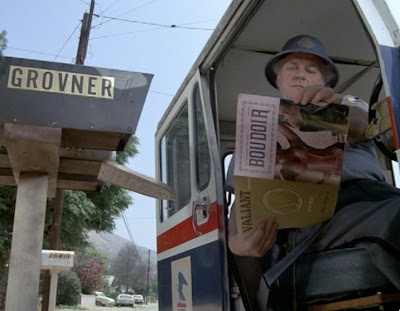 Like the scary truck driver mail man in Funny Farm 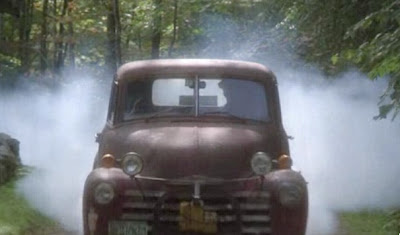 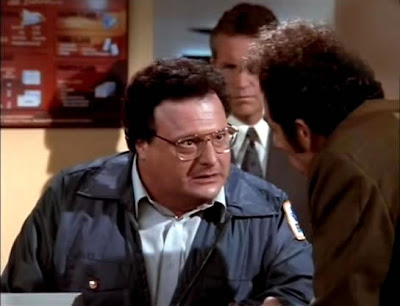 Otis is appalled at Bubba and warns everyone that one of these days he's going to do something bad to one of those kids and that they'll be the only ones to stop him! Well, one day Bubba and his best friend Marylee go exploring in the magical garden of gnomes. Bubba is too afraid to sneak past the fence but Marylee proceeds and has a grand old time pretending to smoke a pipe with the lawn gnomes. 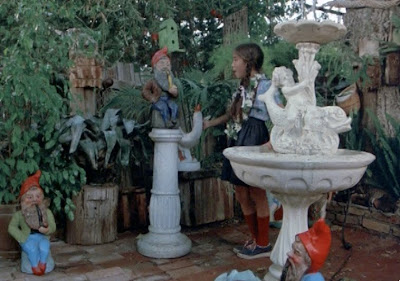 Then suddenly a mean and scary dog comes and Marylee is scared. She calls out to Bubba who finally crashes through the fence and tries to save her, while the lawn gnomes watch helplessly. 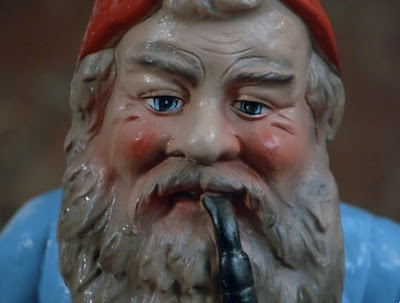 Next we see Bubba holding the limp body of Marylee and the whole town breaks out in Frenzy.
Otis and his buddies decide it's up to them to bring the justice and they set off with guns and dogs. Bubba's mother in a desperate attempt to save him, tells him to play the hiding game, while the men continue their search. Soon they come across a scarecrow and after careful investigation find that the scarecrow is really Bubba. 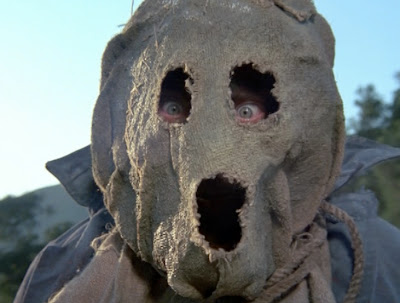 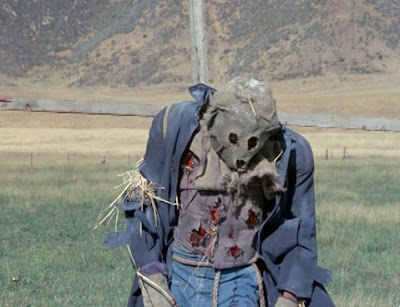 Immediately after, they get a call claiming that the search has been called off--Marylee is okay after all, and apparently Bubba had saved her life. After a court hearing gone wrong, the men get off...or do they? It's not long after this when each man starts to see a mysterious scarecrow in their fields. And they all mysteriously are killed one by one. Hmmmmmm! 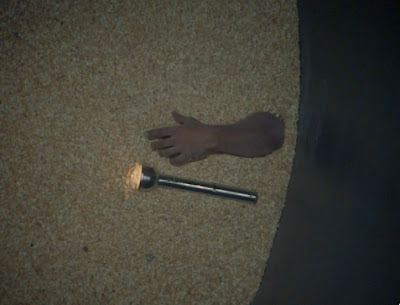 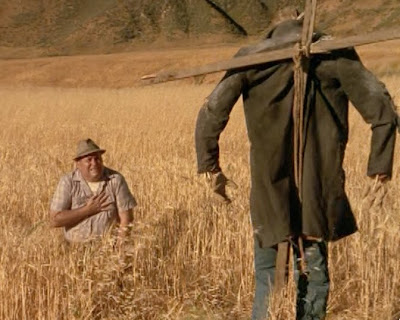 We don't get very close to the scarecrow or anything. Likewise the death scenes are pretty muted. Yes it is a made for TV movie, but we see nothing at all. Although I will say I like the cutaway scenes to something suggestive. Like a big plop of jam preserves on a plate when a guy gets massacred by a farm machine.
I guess I just expected more thrills and chills. I expected us to see a scarecrow wandering around a bit and being all gross and scare-crowy. I don't even know what that means, but for review sake let's just say that means he's limping and dropping hay behind him--and also that he might be smelly.
So, overall I think Dark Night of the Scarecrow is a very well done made for TV movie. Sub par- horror film and I'm a bit confused why horror fans are so quick to jump on this love wagon. Love wagon riders, can I have your thoughts please?
Posted by Andre Dumas at 8:02 PM

I wonder if this movie would still hold up in my old brain. I was a kid when this first aired, and I remember with great nostalgia how much fun it was - it felt like a horror movie that *should've* been scarier and on cable instead of regular TV, and maybe that was enough for some of us. I recall everyone talking about it in school - and this was before the Inter-webz and cell phones and such.

Hm. I may have to see it again soon to see if that nostalgia is sustained or if I think "wait, I thought *that* was scary?"

When I saw Dark Night of the Scarecrow, I was surprised that the screenplay was only being made into a TV-Movie. (In fact, that can be explained here I think-http://thecinemasnob.com/2010/07/15/jd-feigelson-interview.aspx)
As for the Dark Night love bandwagon, it's probably because said bandwagon-ee's have seen some of the more horrible killer-scarecrow offerings, they're bad, believe me!!

And it's a well known facts that lawn-gnomes are HEAPS scarier than measly scarecrows! They were probably working in tandem with the dog, haha!!

Ah yes, Dod, I thought while watching it that there would be a few very scary instances if I was little. Most notably when Bubba gets shot while pretending to be a Scarecrow. That was surprisingly brutal!

Chris-aha! You are right. I knew those smiling bastards had something up their gnome sleeves.....!

I always felt really sad at that first 30 minutes, too. BUT you didn't mention the ENDING and what you thought of it! The ending took me by surprise. I thought for sure maybe it was Mom getting revenge a la F13 or maybe Bubba wasn't really dead, but then you get this ending and you're like OMG it's totally a great creepy ending. I mean, I don't want to spoiler it, but it was pretty genius. Fuck garden gnomes and those people needed to train their dogs.

I haven't gotten to see this yet, though it is in my que after all the strong reviews I've been reading. You should definitely watch Husk. Not the best movie ever, but a great creepy scarecrow and pretty fun.

Heh I know I know I should have said something about the ending Heidi, but then I got lazy.

I liked the ending too. I also thought it was gonna go the route of oooh it's not really supernatural and creepy after all....nuts. But it totally didn't. Actually I forgot about the final frame....which is super creepy! Darn my laziness.

Thanks Erin, I oddly enough just read something about Husk today which peaked my interest, thanks!

This is still on my list of "movies everyone raves about that I have to see", so I can't comment on that one yet, but I'm curious to see what I'll think of it and perhaps I'll come back here when I eventually DO watch it. The real point of my comment though is to give you mad props for mention of CRAZY FUNNY FARM MAILMAN! I love that movie. YELLOWDOG 4EVER!

i LOVE this movie! its one of the
BEST made for tv horror movies ever!
i still watch it every so often. it
still holds up today. that silo scene
was incredible. what a way to go. and
it even has a good moral. and charles
durning's postal villian is superb,
what a nasty, nasty s.o.b.