Popcorn: Without Memory, There Can Be No Retribution 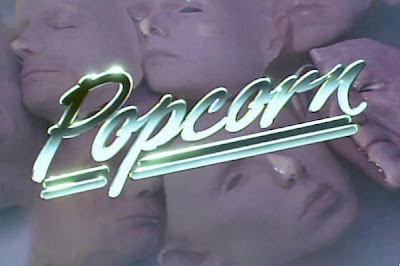 Before I even press play on Popcorn, I feel like I've known it for months. I feel like we have been friends, communicating on the interwebz in an openly non-sexual yet, entirely flirtatious relationship. As with most things that happen in my life--we can blame this effect on Kristy Jett, who has formed a strong bond with Popcorn. She's been doing her damnedest to make sure that Popcorn gets the re-release it deserves, complete with a very special retrospective documentary. Follow the progress---here!
So like I was saying, everything is Kristy Jett's fault and it is because of her and all her Popcorn promoting that I felt like I already knew the film. I was nervous about my first real life meeting with Popcorn. Would it be as good looking as its picture suggests? Would it be awkward in real life instead of funny and sarcastic? Luckily my butterflies subsided almost immediately and guess what? Popcorn is pretty damn entertaining.
Popcorn is the kind of film that isn't just made by people that like horror films--it's done by people that understand them and the legacy they leave behind. The film takes place during a horror movie marathon, where during various gimmicks--our characters are killed in a brutal fashion. 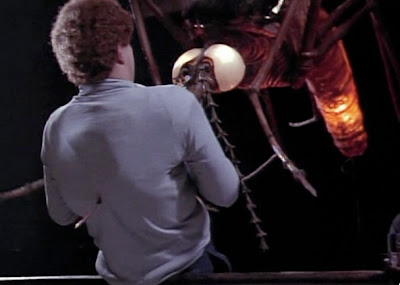 All the while, Maggie tries to piece together the parts of her cloudy and mysterious past, which when completed will reveal the true nature behind the killings.
Popcorn is a homage to several amazing things. Mostly this is William Castle, whose legacy of gimmicks and theatrical spectacles are things of legend. I said back in my review of The Tingler, that I wish someone would bring back the awesomeness of things like electric shocks underneath theater seats, black outs and creepy, crawly tinglers brushing past our legs.
Well, the film students in Popcorn do exactly this, and it's brilliant! They rig up a giant mosquito to come flying at the audience during a film called Mosquito! 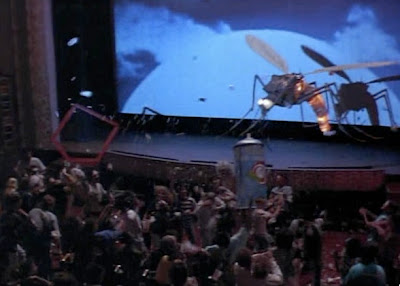 They set up an elaborate system of actual shocks during "Attack of the Electrified Man" and finally, they employ the power of "aroma-rama" during "The Stench". All of the gimmicks are multiplied in fun by two fold as we also get to experience the mega insanity of the crowd in the film enjoying them. It makes me a bit jealous actually because I know that no film-going crowd that I see a movie with will ever be as animated as these people. I mean, can I really trust my fellow film goers to unleash a barrage of popcorn and soda containers at a giant flying mosquito about to eat my face? Probably not. This whole aspect of the film although exaggerated some, solidifies the simple idea that going to the movies should largely be an experience rather than just something you watch. 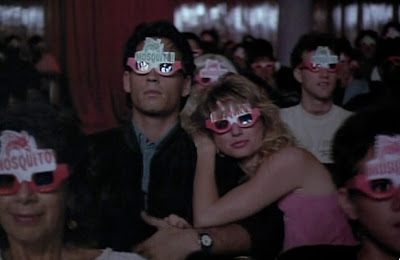 It's no surprise that Popcorn is heavily influenced by the William Castle school of awesome--the poster of The Tingler in the background here, 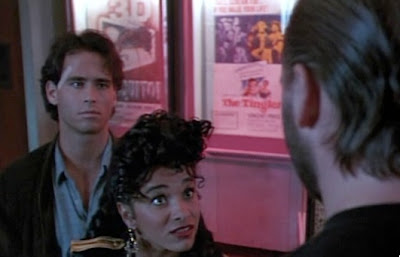 and the death clause forms are just a few of the little winks in horror film fans directions. I was worried at first that when the killing began--the gimmicks and the movie marathon might stop--but boy was I wrong. Popcorn also does a very important thing here by showing the sheer power of a film going crowd who is lost in the moment. We saw it 6 years before in Demons and we see it 6 years later in Scream 2--it's a phenomena that garners a strange respect where we realize that what happens on the screen is the most important thing in the world. Sure, I may have never experienced it really myself (although I am looking forward to one day getting free glow in the dark Stab knives as I enter the theater) but films like this use the phenomena to their advantage and I totally dig that. 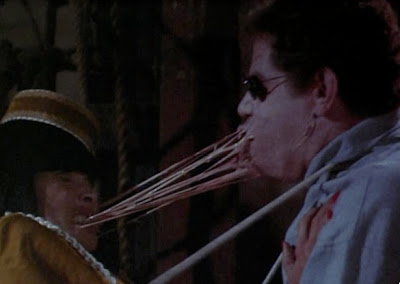 Popcorn is one of those films that is a lot smarter than you think it is. It has both its good and bad moments, and the plot towards the end gets a bit dodgy in spots--but overall the film is a fine example of a horror film that does what it's supposed to do--entertain us. Just between you and me, I feel like I've fallen into a bit of a dry spell on the whole not paying attention thing when I watch films. It's like I suddenly came down with a flaming case of ADD and there was nothing to stop it. Well, consider Popcorn to be my Ritalin, because I was completely focused and drawn into the mystical powers of Popcorn. It's hilarious in some parts, creepy in others and contains some truly brilliant soundtrack use. 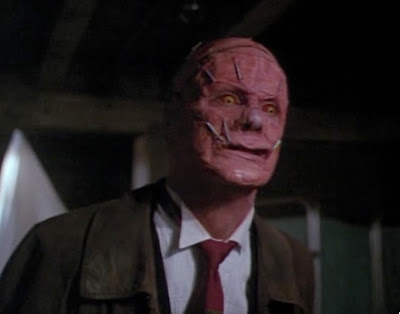 Plus, Dee Wallace, that blonde girl who was the beauty queen from a League of Their Own, that guy in Vada Sultenfuss' poetry class in My Girl AND the sister from the People Under the Stairs all make an appearance. And to top it all off Jill Schoelen stars--whom to many signifies The Stepfather but to me---signifies Babes in Toyland, 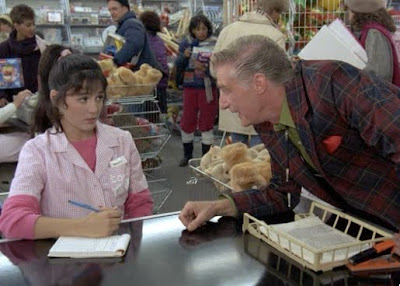 and wanting one of those Toyland cars (With a cookie license) for myself. (Blue please Santa, thanks!) 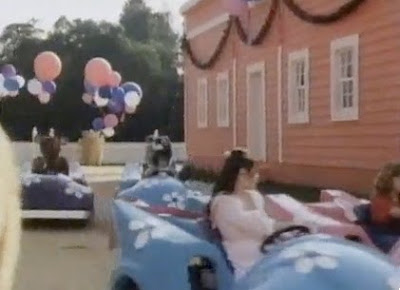 I mean really, what's not to love?
So in closing, Popcorn and I have finally met and I think---I THINK we may actually be real life friends now. Can you believe it? I have to go now so that I can write Mark Zuckerberg a thank you letter for creating a social network outlet where Popcorn and I could meet and really get to know and understand one another.
Posted by Andre Dumas at 9:42 PM

I really liked Popcorn. Not so much at first, but the more I distanced myself from it, the more I found myself thinking about it and really appreciating it.

The script was rewritten from a supernatural horror to a slasher flick about halfway through filming which does make it feel a little disjointed, but I don't know - I think that almost adds to it's charm in a quirky kinda way.

I gotta add that I'm also unexplainably drawn to anything with Jill Schoelen in it. Cutting Class, Babes in Toyland... heck I even watched Hot Moves. Considering I'm a girl, this is weird.

That is a good point Kaz! There were moments where that original supernatural concept tends to shine through a bit. Those moments left me scratching my head a bit, but I had completely forgotten it until you mentioned this!

I sorta view this movie, in retrospect, as a horror version of MATINEE (particularly with the William Castle angle). I've always thought it was really good ever since I first saw it on cable in Jr. high.

I l o v e Jill Schoelen. She's a sexier, sweeter, way less annoying Demi Moore. However, her hair in When a Stranger Calls Back is tragically awful.

omg I need to see this Movie , just that screenshot of the face being melted done it for me.