Who Let The Fog Out? 10 Reasons To Watch The Fog 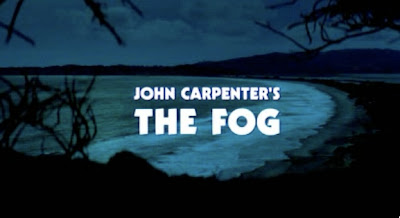 I guess no normal person really needs a reason to watch The Fog. But on the off chance that someone is not normal and does in fact need reasons to watch one of the most atmospheric horror films of all time, I have decided to make some. Some are obvious, some are random and some don't really make any sense at all--but that's the beauty of The Fog--there's so many wonderful things about it.
1. Campfire stories

I think I've mentioned this before, but I was never a camp kid. This makes for two really sad things that I have missed out on because of it--getting killed by a serial killer AND hearing spooky ghost stories while sitting around the campfire. The opening story in The Fog is so delightful. It perfectly sets the mood and tone for the eerie occurrences we are about to witness. The story of the Elizabeth Dane is riddled with old ships, disaster and the wide eyed looks of the kids huddled around the fire. Trust me, I've asked the age old question of why I can't have a spooky old man tell me and my friends campfire stories when I'm bored, a million times and I can never come up with a good answer--except that I'm horribly unlucky, and that also there is a shortage of creepy old men who are not also pedophiles. Oh well.
2. Unexplained Spooky Phenomena! 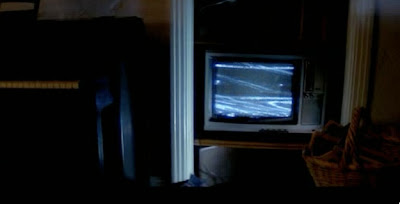 I love how the first few minutes of The Fog is filled with all these spooky things happening. Glass breaking, chunks of wall falling off, dogs barking at nothing, bottles shaking, TV static, chairs moving, car alarms going off. It's the kind of stuff that ghost stories are made of and yet until I re-watched The Fog last night, I had practically forgotten that The Fog WAS about ghosts. Sure, they are a different kind of ghost (ghosts with leprosy--impressive) but they are still very much ghosts, and The Fog is still very much a ghost story. Plus, I love that the townsfolk refer to all these happenings as the town "falling apart".
3. The Strange Sexuality of Tom Atkins

Women are powerless against it! Men probably too. In fact, it's almost as strange and unexplainable as the spooky phenomena happening. Is there a good reason why Tom Atkins can bed a woman in less than 5 minutes? Other than the fact that he's Tom Atkins? No. I still don't get it. I've tried math equations, tea leaves AND I asked Jeeves. Nobody knows! I always find it so hilarious that this is Jamie Lee Curtis' and Tom Atkins' second scene after meeting each other and they are already naked. Previous to this they were making hitchhiking jokes and freaking out about spontaneous car windows bursting. Recipe for love I guess.
4. Drunken Sailors

Whatever happened to drunken sailors? OR better question--is there such thing as a non drunk sailor? I'm not sure. And even though the crew of the Sea Grass is only around for a few seconds, this scene is one of the most memorable. The drinking, the lines and of course..............
The George "Buck" Flower! 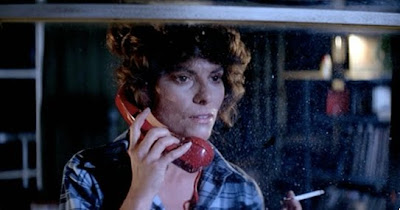 If there's one thing in life that I've always wanted--it's a red telephone. I mean, red telephones are so cool. This is because usually when you pick them up your call goes directly to someone important like the President OR maybe Kurt Russell. Naturally, Adrienne Barbeau's red telephone probably isn't that cool. But still one day--I'm going to get a regular phone and a red phone and then when people come over they'll ask me what the red telephone is for. And then I'll just get all serious and be all,"You don't want to know". Red phones are so mysterious!
6. Polite Ghosts

Hands down my favorite thing about the ghosts in The Fog is that they are polite. They knock before entering! I don't know any other ghosts that would do such a kind thing, do you? Granted, when you come and answer the door they then gut you with their hooks and drown you and gouge your eyes out--but hey---you didn't have to answer the door Mrs. Kobritz. Just sayin'.
7. The Music!
I'm obsessed with this theme. Listen my children and be transported to the foggy and majestic landscape of Antonio Bay.
8. Janet Leigh

The Fog has a few Hitchcock throwbacks that I absolutely dig. The first is of course the appearance of Janet Leigh who nicely reunited with her daughter Jamie Lee Curtis. I love her and I love that she is in this and that she's a crazy committee woman. The other cool thing about the Fog is that at one point Tom Atkins I think, mentions something about Bodega Bay--which if you recall is the place of action in The Birds. Now, in The Birds, all the bad stuff starts happening once Tippi Hendren comes into town. In The Fog--the bad stuff happens when Jamie Lee Curtis comes to town. Coincidence? I think not.
9. Possessed Wood
I promise I wasn't intending for that to come out dirty, but now that I think about it--it would be a wildly hilarious and appropriate title for a horror themed porn. Hmmm. Anywho--I'm going to swear so I apologize but I fucking LOVE when that piece of wood from the Elizabeth Dane sets itself on fire after the words 6 must die magically show up.

And also it's leaking all this nasty dead water on everything and man.....I just love it. I'm not 100% on this but I'm pretty sure we need more inanimate objects to do cool shit like this.
10. Adrienne Barbeau

So her breasts aren't as delightful as they are in Escape From New York--but she's still Adrienne Barbeau and she's a DJ. I've never told anyone this before but sometimes when it's really late, I pretend to talk like Adrienne Barbeau in her sexy DJ voice. Do you know what happens? My voice hurts! How does she do it? I'll tell you how--because she's Adrienne Barbeau damn it. Ugh. I just tried to do it again and it hurts! It hurts so much! There goes my dream of being a sexy DJ broadcasting from a lone lighthouse...boo.
BONUS
11. SOLID GOLD CROSS

No explanation necessary.
Posted by Andre Dumas at 11:15 PM

The power of Atkins's sexuality is undeniable. For further evidence, check out Halloween 3, where he only needs a six pack of Miller and a hotel room key to convince Stacy Nelkin that she should shack up with him.

Oh I am well aware of the Halloween 3 evidence Brett--further proving his strange sexuality. Such a mystery!

I love The Fog for so many reasons, and you named 10 astoundingly great ones. But here's one more, did you know that it's my official Wedding Anniversary film? It's true.

The events detailed in The Fog happen on April 21st, the same day my wife and I were married. So every year one of our Anniversary rituals is to break out The Fog and watch it. The Lair even got decked out in Fog drap for this month as my little nod to the special day. I'm thinking about writing something on my Anniversary about The Fog, but I'm wondering if I can bridge the gap between ghost pirates and unending love......

Holy JEEZ that's amazing! I can hope that someday I have a wedding anniversary as cool as that.

I absolutely love The Fog. I just can't get enough of it, so much so that my copy of it never leaves the side of my TV because whenever I try to put it back on the shelf, I feel the desire to watch it... just touching the DVD case has that power- much akin to the power of Tom Atkins. As much as I love Halloween, there are times when I think The Fog may be my favorite horror movie ever.

THE FOG is a great flick. I try and have people watch it [I know a lot of people who've seen the remake but not this one], but they pretty much fall asleep during it. I get that it's a bit slow but geez - it's John Carpenter at his peak! Respect the art! Anyway, you listed 10 great reasons. Adrienne Barbeau - what a babe. That's one sexy voice. Great post as usual!

And let's not discuss the remake, okay?

Now that you've done this, you can focus on the much harder task of coming up with 1 reason for someone to watch the Fog remake.

i pretend the remake doesn't exist. Which is easy to do since I've never seen it...! But I'm kind of intrigued by Chris' challenge!

I too was never a camper, because I had seen too many scary movies and was a pansy child. But campfires - or I guess just fires, since there was no camp - are a family tradition here. Love, love, love 'em. And yeah, they're no good without ghost stories.

And right on re: the theme. One of my favorites from Carpenter, and it's especially effective as a closer at the end of the film.

Words cannot express how much I adore this film. I admit I saw the remake and was so repulsed by it I never watched the original for fear it was equally horrible, how wrong was I. I have seen the light and it is "The Fog". On a side note, I thought I was the only one with an obsession with red phones (I too have always wanted to buy one regular and one red and have them sitting next to each other).

May I suggest a blog post entitled "10 Reasons to NOT Watch The Fog Remake"?

Totally agree with all your reasons, especially the one about campfire tales and supernatural shennanigans, its the main reason why I enjoyed this movie so much, the atmosphere!

Id add ghosts with read eyes to that list! That was a spooky image!

And damn it, I had a screenshot of the red eyes too, should have added that in somewhere...

These are all excellent reasons for why THE FOG is so awesome... and underappreciated, I think - even among John Carpenter fans. Despite the production problems JC faced, I think he did a great job and I love the slow burn atmospheric set-up so that we get to know all the main characters which helps us care about 'em later on in the film. The less said about the crap remake the better. Ugh.

this movie is written by James Vallely. he is a one of the famous writter in the world. you can watch Granted Campfire Stories 2 movie from this website.