Happy Birthday to The Donald! 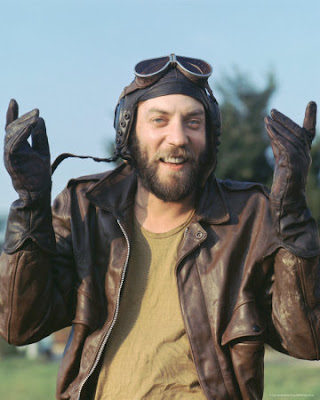 The heat makes you do crazy things. Like, turn gin and tonics into slushies (ha, yeah if by "crazy" you mean amazing...), put ice down your pants and forget the coolest person on the planet's birthday. Yes my friends, I, one of the biggest supporters of The Donald did not know that today was his day of birth. Don't say anything, I already feel horrible enough.
Thanks to one of my more brighter and cooler Twitter friends, I was alerted to this most wonderful day just in the nick of time. Why do I love The Donald? I'm not sure. But since when did we need a reason to love?
So rather instead of trying to explain with words, let us enjoy a few clips of some of the best The Donald had to offer.
I hope you're not still pretending that you don't love Buffy the Vampire Slayer the movie. It's only the cat's pajamas. And by the way, I watched a few episodes of the TV show and I didn't like it because Sarah Michelle Gellar annoys me. There I said it! LONG LIVE MERRICK.
I hope you didn't watch that if you've never seen Don't Look Now before...maybe I should have put the Spoiler alert before I posted the clip. Oh well, The Soup didn't say SPOILER ALERT before completely ruining the end of Season 4 of Dexter, and nobody cared about my well being. Except me.
Whoops, another spoiler!
Oh my god, why have I still not seen this movie? Besides the fact that the title of this YouTube video is incredibly offensive, this clip is amazing. I know what I'm watching tonight!
Donald Sutherland is Homer Simpson.
It's true what they say, Donald Sutherland dies a lot in movies huh?
Canada is AMAZING!
Again, why are you people holding out on me by knowing about cool movies like The Puppet Masters and not telling me?
I'll be honest. I did not know The Donald was in An American Haunting. Judgement withheld...
Posted by Andre Dumas at 7:46 PM

Poor Oddball in Don't Look Now, he had the indignity of being killed by such a hilariously ridiculous twist ending, if only he'd had this midget on his side to help him! http://www.youtube.com/watch?v=M5KeUMxyAwM

The Donald is such a bad-ass. Especially in his small role in JFK. Fucking riveting.

Hey hey, The Puppet Masters is set in Iowa! And yet, I know that...and I know of The Donald...and I haven't seen it either.

We should watch it together, via live tweets!! It's on youtube.