Let Me In: Yeah It's Okaaay

I admit I didn't have much motivation to see Let Me In. This is due to the fact that many who saw the remake to the wonderful and quietly terrifying film Let the Right One In--dubbed it as being far too similar to its predecessor. I suppose I prefer this to the remake being a complete waste of space, but this review from my peers wasn't entirely hopeful either. For a remake to be good in my book it needs to do something new and exciting with its source material. We know the obvious examples of films that do this (The Thing, The Blob, The Ring (yes The Ring!), but when a remake is just as good as original or almost as good---it doesn't really excite me. And why should it? Why would you want to see the same exact movie again except in English? 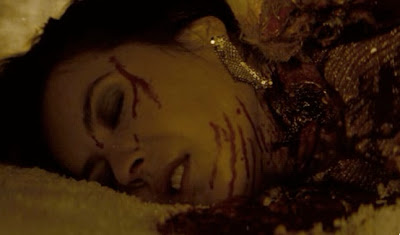 I will say after watching it however that Let Me In is a good thing that happened. I say this because the story is interesting enough that most people who do see the remake first---may in fact be tempted to visit the original, which they should for many reasons that I'll get to later. In the meantime, Let Me In surprised me in how well it respected its foreign twin and also in how not EXACTLY similar it was, despite what everyone had told me.
The story remains the same: Owen is an awkward skinny young boy who is constantly bullied by some real assholes at school. When Abby, a girl who appears to be Owen's age moves in next door with her "father" some weird things start happening. People are turning up dead, and despite the growing friendship that Owen develops with Abby, he can't help but feel something is UP. 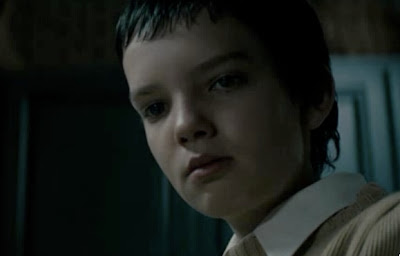 Well obviously Abby is a vampire and her "father" is her helper person. The film and its original original source material the novel, Let the Right One In, do a fine job of commandeering a friendship between Owen and Abby that is both innocent and strange. It is in fact their relationship that remains as the focal point of the film while the whole vampire theme stands as more of a plot point. An important one yes but still if you think about it, it really is just a way to move things from here to there. Let Me In takes this same tactic which is a giant relief considering the teeny bopper fad that vampires have become. Here Abby's "condition" remains scary and the pair's relationship never falls into annoyance. They really do seem too young for this to get into Twilight territory and that is brilliant. 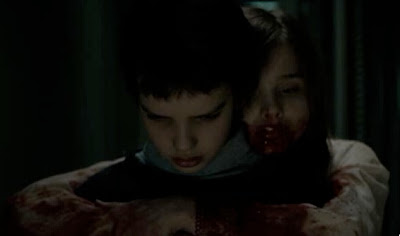 While the film doesn't take any great divergence from the original, it still manages to do some different things. Some may consider these things minor--but I don't know. I think people tend to focus on what they don't like because they don't want to like it. If you're going into a remake thinking that it's going to be exactly like the original, your brain is going to spot the similarities more than the differences. The similarities seem like a big deal because those are big moments--and they are the best moments. Why change the things that are absolutely brilliant and perfect? 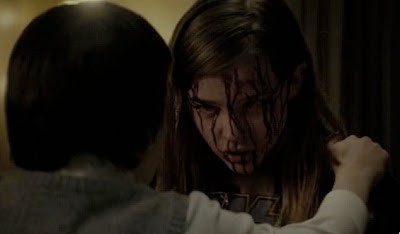 Despite all this, the thing about Let Me In is that it doesn't seem to contain that same brutality of the original. A lot of things felt surprisingly held back in this. All the brutality seemed hidden and subdued. Abby's vampirism was also a little too.....vampiric for me. I realize that probably doesn't make sense to anyone that didn't see the original so I apologize. What I mean is that I loved that aspect of the original--that Eli (Abby) didn't really seem like a full fledged vampire. She was one of course, but it always seemed more like some weird disease, than a thing of myth. My favorite part about the original is when Eli's face turns into that scary old man face. In Let Me In however that face turns into VAMPIRE. Like, white eyes, huge jagged fangs and growls and scariness. It just seemed a little too typical to me. 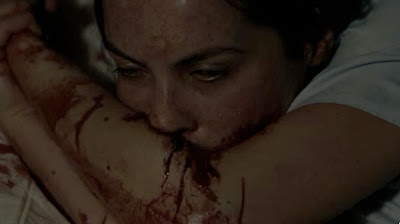 There's also the annoyance of the policeman character in Let Me In. He's pretty useless and at one point shows up and completely botches everything. I'm not sure I was comfortable with Abby being tracked so to speak and her lair being unveiled. But mostly---the policeman is just useless. Just a way to get some suspense and urgency out of the audience--but we don't need it. The real push and driving force between the ultimate conclusion of the film comes from the asshole bullies doesn't it? 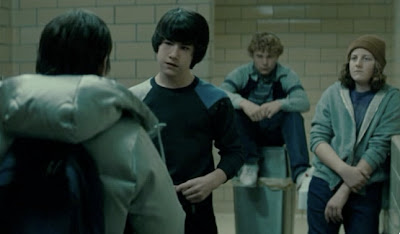 Overall, Let Me In is a worthy film to watch. It's not spectacular and it seems a bit muted in contrast to the original, but it still captures that same moving and intriguing tale. The roles of Abby and Owen are different enough and well done and while there could have been a lot of more blood on snow action---I feel pretty okay about things as it is. You should still of course see the original if you have not. I feel like there's a lot of more depth and brutality to it that really pushes it into that awesome territory that we all love so much. It's just.....foreign films seem to be able to do blood better than we can you know? Do you ever feel like that? Well I do! It's like...........they respect the blood or something. They make it into something artful rather than just something to symbolize gore. Probably this isn't true, but for the sake of this beer I'm drinking right now, it is definitely true. And also I'm always right about everything. Except for when I think wearing my flip flops in the rain is a good idea. But hey, I'm just human. 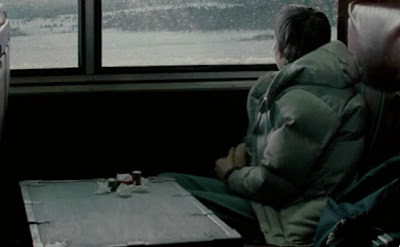 I really like the botched killing scene in this version.

I've been putting off seeing this, because of my love for the original too. Despite reading many positive reviews, I just find it hard to muster the enthusiasm.

I agree with "matango", the botched kill scene is a nice change from the original. Overall, I dug the remake. The thing that really bothered me was the way they made Abby look like Smeagol from LOTR when she attacked. Awful CGI.

Whenever this comes up, I tell everyone to read the book...that's where it's at.

The botched kill scene was quite interesting although I think a little bit more action packed than I personally would enjoy. But I am in agreement mostly. I also somewhat enjoyed the burning bed scene in the remake. I like the lead up to it better in the original but here, when she's sucking on her arm....I liked that.

As for the book. I think I'm a total book snob. I read half of it but was annoyed at how badly written it felt. I think most of that has to do with the translation but I don't know! I couldn't get into it or something. I felt ashamed.

You make a good case for this one. My issue was that Matt Reeves just kept saying "I'm adapting the book, not remaking the film," and yet I felt like entire sequences simply felt translated from the original film, while nothing in the book that WASN'T in the first film made it into this version. I think I'll revisit this one a few years from now when my annoyance has subsided to see where I really stand.

Oh right, I remember Matt Reeves saying that when it was coming out. And since I only read half of the book, I can't determine if it's true so I will just listen to you! Honestly though, you can't deny the fact that most scenes are highly influenced by Let the Right One In. It's fine that they are, but don't claim the film is more of a re-imagining of the book. Pffffft.

I felt "Let Me In" is to "Let the Right One In" as "Quarantine" is to "[REC]. Worth watching if you don't mind watching the same movie twice...on different drugs...or something.

They're basically remade as opposed to being re-imagined. At the risk of being skewered by 70's horror fans (as opposed to those of us who simply dig horror), I absolutely loved what Rob Zombie did with Halloween. The original was freaking brilliant, the re-imagining was equally awesome. Different, yes, but still way cool.

I saw "Let Me In" first, loved it and then immediately watched the original (found it at my local library, if you can believe that...SCORE!). Both were cool in their own way.

@B.STANK You're totally right, the Smeagol CGI wasn't a strong point. Besides, didn't that little bastard fall into the fires of Mt. Doom?

I feel the movie makers owe it to the horror community to throw some more originality into the mix if they're going to mess with a great movie. If the original sucks, anything goes, but you shouldn't remake it unless you've got something solid to add to it.

Or, unless you've got some different drugs for the second watching...

Anyway, thanks to everybody for sharing your thoughts on this matter.

And, as always, thank you Andre for your excellent blog. Keep up the good work. It's appreciated.