Let's Scare Jessica to Death: A Curious Diamond In the Rough. 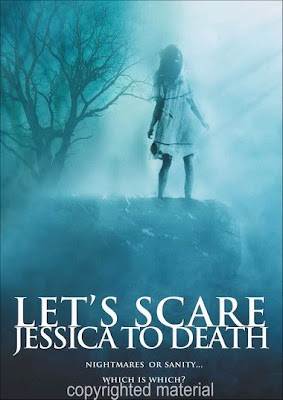 I feel like I've just discovered a hidden jewel. Noted as one of Stephen King's favorite horror movies, Let's Scare Jessica to Death has one of the most off putting and wonderfully creepy atmospheres I've ever experienced. There's something so strange and elusive and beautiful about this movie that's it making me scratch my head when thinking about why I've never heard of it before.
Jessica has just been released from a mental institution where she stayed for 6 months following some sort of breakdown. She, her husband and their friend have decided to move into a large farmhouse on a quaint little island. It's not long before Jessica starts spotting eerie figures, seeing bandages and weird scars on all the male townspeople, and gets ominous warnings from a strange girl in a white dress. Emily, the girl was who living in the previously vacant farmhouse is now living with them- and Jessica can't help but notice her husband's growing attraction to her. Soon things start to get the better of Jessica and she has a hard time giving into what she is seeing and trying to convince those around her that she is not crazy.
Right away I knew that I was going to like this film because of the different and understated approach it brought. The movie opens with Jessica in a boat by herself- talking to herself- her voice over forming the constant inner monologue she shares with herself. The constant input from Jessica's conscious mind is almost startling in how perfectly it works. The character of Jessica is complex and intriguing. Here we have a woman on the path to recovery- where any little strange occurrence could set her off and bring her back to insanity. What goes on in this movie is purely based on interpretation. Is she sane or isn't she?
There are so many different ways to explain what is happening and so far people seem to think it's either vampires or just Jessica being insane. It's surely a tough call and even after multiple viewings I don't think I would be able to come to a decision. I guess what really mattered to me was just the beautiful atmosphere and the character of Jessica. Her discussions with herself were so amazing to me. The question of insanity is also extremely interesting.
I can't stress how ominous and creepy this movie is. My favorite moments involve Jessica seeing something that may or may not be there. Figures that just stand there- they aren't "dead" looking, or ghostly- you just know by the atmosphere that they don't belong. There's also no sudden jolt of music signifying to you that something is amiss- which I love. Judging by this it isn't even a sure bet these people are ghosts or not there to begin with, which makes things even more complicated.
I found the images of the figures to be the most startling- in a beautifully creepy way of course. I love love loved when Emily came slowly out of the water for instance 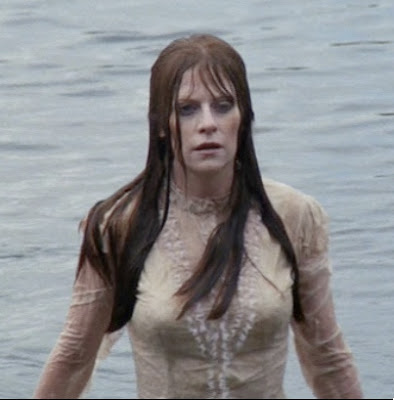 and the girl standing in the graveyard. 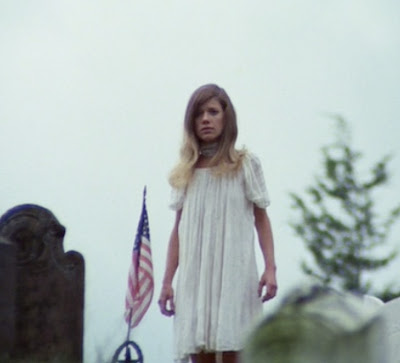 I also love that little detail of the main characters driving around a hearse- and what the significance of it is. Are they already dead in a sense? To be honest I don't like buying into the whole vampire scenario- I just prefer to leave things unexplainable and ominous. I think the movie works better that way and I truly believe it was intended to be so.
Jessica's voice overs are pure poetry and so moving to me- her voice is so calm and cool inside her head- but somewhat panicky outside of it. The music brings both themes of insanity and sanity- if you listen closely you notice there are almost two different songs being played at once...it's all so remarkable to me. The whole movie actually plays on both of those premises. There is the sane side of the movie and the insane. The sane side of Jessica and the insane. What we choose to believe and what we choose to make of it depends entirely upon us. Here are Jessica's first opening lines while she is floating in the boat sitting out in the middle of a lake. These same exact lines and the scene is repeated again at the end of the film.
"I sit here and I can't believe that it happened. And yet I have to believe it. Dreams or nightmares. Madness or sanity. I don't know which is which. "
Jessica's commentary is the perfect definition of mental illness. The disbelief and yet forcefulness of what is actually going on. A mind being tugged back and forth between two realities, and the constant uncertainty of what is actually happening. That's the thing about mental illness you never know how things happen or why they happen- even if it's happening inside your head and no one else's. While you should be in control- the reality of the situation, is almost always the opposite.
I quite like this new trend of ending a post with a memorable and particularly telling quote by the way...!
So through this post I've decided I love this movie and that I'm now obsessed with it. It's not for everyone of course but I find that there's truly something special going on in it- and something I have not felt for a long time.
This is the ending of the film with the above quote. It doesn't really spoil anything- but it's just the perfect example of the kind of beauty and simplicity that I'm talking about.
Buy Let's Scare Jessica to Death at Horror Movie Empire!
Posted by Andre Dumas at 8:13 PM

Labels: Ghosts and Spooks, Must See

A psychology teacher in high school told us 1 in 4 people develop some form of schizophrenia to some degree. 25%. I you're in a room with three sane people, you're the crazy one. And that is just schizophrenia. What about mania, neurosis, phobia, obsession, compulsion, personality disorders? Insanity is a touchy subject. Many times a movie will approach the topic in a disrespectful or ignorant fashion. It seems Jessica oversteps that pitfall to deliver an intriguing portrayal of a damaged mind. When one cannot trust one's own perceptions, what can one trust? Nice find. I shall seek this out.

I tell you, every time I read one of your reviews about a movie I haven't yet seen, I run over to Netflix and add it. Now, I'm about to do it again. You've become my main source for movie recommendations!

Great review - I always love a good, atmospheric thriller that plays with the mind, character or viewer.

They just dont make em like this anymore! I agree with you, its creepy in a beautiful atmospheric way. That house with the exteriors filled with fog, just looks so wonderfully creepy.

Loved how they leave everything so ambiguous. You could go either way, shes crazy, or everything really happend, I really think its up to the viewer to decide.

I did a review for it a while back if your interested in checking it out:

Oh man, one of the most polarizing films between me and my friends.

It's one of my top five favorite horror films of all time, but a lot of other people dismiss it as boring. The atmosphere is, indeed, amazingly dread-inducing.

My friend Adam knows where the house is located in CT and we've talked about taking a trip there many times.

I love this movie. The only people I know that don't like it are folks that are hyperactive, need an explosion every 2 seconds to keep my ADD ass from breaking concentration. The eerie slow build and atmospherics totally make this movie and prove that you don't need blood or gore to really get the heart pumping. Great review.

I never got around to seeing this film until recently as well, the title made me dismiss it as some kind of a slasher film.

As the movie was progressing I started getting a kind of Shadow Over Innsmouth vibe from the whole affair.

How about you folks?

in my top 3 or 4 horror movies, reminds me of rosemary baby...the music is awesome!

An excellent film that really shows how powerful some folklore can be. My review here: http://bit.ly/bRofGr

This is in my top 10 horror movies of all time. Very happy there are people out there still discovering it for the atmospheric chiller that it is. Slow burn movies are few and far between...This and The Changeling are both classics.

I just watched this and enjoyed it quite a bit. I really do like that the movie doesn't resolve whether or not it is all in her head or not. I can't remember any other film where the movie doesn't end with a definitive answer one way or another.