The Ward: Broke My Computer 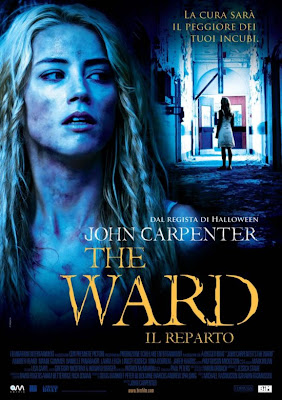 The Ward is not a very good movie. In fact, it's a terrible movie as evidenced by the fact that once I was done watching it, my water bottle, acting out of its own free will, decided to douse my Macbook with water and destroy it. Now because of The Ward, I have no computer and am forced to use Emmy Doomas' Dell which likes to randomly highlight things and also the keys are too close together so I'm typing like a 4th grader or a really really old person. Seriously, thanks a lot The Ward. Thanks.

In all honesty, I knew that John Carpenter's long awaited return to horror in the form of The Ward, was not met with a lot of happiness. I however like to give things a chance and therefore I decided that before I refused to ever hang out with The Ward, it would do me good to get to know it on my own terms. My own terms have now been achieved and the verdict is of course that The Ward totally stinks. Here is why. 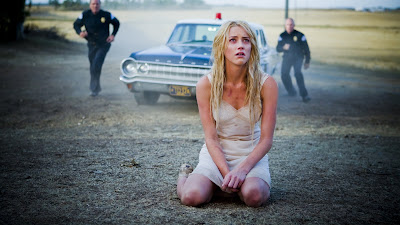 The Ward centers around Kristen, a girl who gets picked up by police after burning down a house. She has no idea why she did it and has no memories of anything prior to the house. She gets put in a mental institution with other girls and soon finds out that a mean corpsey ghost is haunting the ward and killing off the girls one by one. Who is this corpsey ghost and wait a minute, aren't we supposed to be finding out why Kristen is there?

See, that's one of the main reasons The Ward does not work for me. We are set up thinking that we are watching a movie where little by little we come to find out the truth of our heroine's past. This however gets immediately shoved to the side by the existence of a ridiculous and stupid "ghost". Suddenly, The Ward falls from being an eerie psychological thriller, to an Asian movie with a ghost. This is forgive me for saying, stupid. 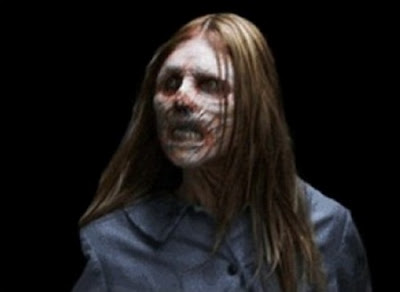 Stupid because the parts with the ghosts AKA the entire movie are centered around the very idea of cop outs. There is NOTHING scary about The Ward and we know this because the "scares' are represented by jumps and things that force us to be scared. Instead of building up the creepy atmosphere of the ward, the corpsey hands and stupid face of the ghosts are crammed down our throats. It's so disappointing. Any movie that completely wastes the atmosphere of a creepy mental institution is an asshole in my book.

Additionally, the acting is entirely unconvincing, complete with lines like "No! Noooo! Not that!" really awful stuff. The ghost also apparently studied torture at the school of nonsense because honestly--why is a ghost taking the time to strap someone down and use various forms of psychotherapy to kill them? It doesn't make sense.

Which brings to my final point---The Ward does not make any sense. Once the twist is revealed, the Ward becomes one of those movies that suddenly loses all of its creditability. It almost seems to come as a sort of disrespect for the audience in a way--to completely negate every single thing they have just watched. It's so ridiculous that it makes you laugh out loud. If you want to talk ridiculous involving the plot twist, do so in the comments section and I will join you.

So in closing---The Ward is horrible. Please do not watch it unless you want to waste an hour and 30 minutes of your life. And since The Ward is so sucky and because it destroyed my computer, you can expect posting to be minimal until payday when I can buy a new computer. I'm not sure how much more of this Dell I can take...............
Posted by Andre Dumas at 11:37 AM

Sorry about your computer. That blows. You know what else blows? The Ward. I thought "Ooo. Lyndsy Fonseca and Amber Heard. I think I'll watch that!" And then I was punished. PUNISHED.

Does your renter's insurance cover accidents to your computer? It's usually available. I know this isn't very helpful after the fact.

Also, Apple was able to repair mine from a similar accident a few years ago for $200 or so. If you are still under warranty, and the computer is totaled, they might still do the thing where you basically get a new computer for $800.

Well it was pretty old like 3 years coming on 4 I think so I won't pretend like it's not time! But then again not having to spend 1200 bucks would be nice...

I'll take it in and see if there's anything to be done though, thanks for the hot tip!

I learned a long time ago never to diss John Carpenter...I lost a VCR back in 95 after I thought his remake of "Village of the Damned" was awful!

I was actually enjoying The Ward until the end. I didn't think it was thoroughly awful - it just became awful once the by-the-numbers "twist" was revealed. I think the widespread hatred is mostly due to it being a John Carpenter movie. You feel like his return to directing should be an inspired project that he was driven out of retirement to bring into being and that will usher in a new age of awesome horrorness. Instead of, you know, The Ward.

I'm too much of a Carpenter homer to admit anything bad about this movie. But I'm struggling to say anything good about it either. :(

Grrrrrrr random highlighting, doesn't that serioulsy piss you of. I brought a new mouse and key board recently and have the same problem ever since. The thing is if I don't see the highlighting in time it wipes out the whole post .I had that happen several weeks ago ater several thousand words. Arrrrrrrrggggghhhhhhhhhhhhhhhhhh!!

It reminds me of the twist to Haute Tension, or however you spell it. It's another one where you wonder, "well...then how the fuck did that movie just happen?!" once you hear it.

Man, that totally sucks about your computer, Andre. Not to mention having to watch another shitty John Carpenter movie on top of it.

This is one movie that does not deserve to have "John Carpenters..." tagged on before the title. I was hoping that his return would also be a return to form, but sadly that's not the case. To be honest-cop out ending aside- I would have liked this film more if it wasn't directed by Carpenter.... But his name attached makes me expect more, and what we have is a director o
For hire going through the motions with a mediocre script and competent but uninspired performances.