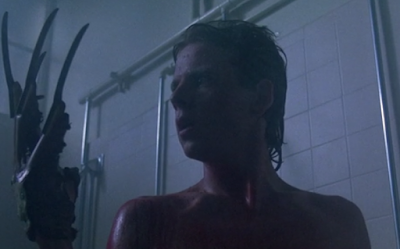 At some point in life, probably when lamenting about the fact that I'm so bad at watching sequels..I remember people actively telling me not to watch A Nightmare on Elm Street 2 and to just skip on to Dream Warriors. I see where they were coming from. Dream Warriors is exquisite and Freddy's Revenge is maybe well.....not. BUT that doesn't mean that it's not awesome in its own special way. Plus do you people know me at all? If someone told me there was a bedroom dance sequence set to Touch Me (All Night Long) I would have watched this immediately. I mean come onnnn! 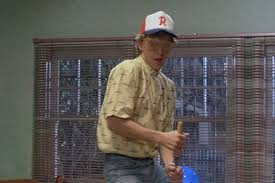 I would also like to point out that I have seen the first scene in this before and I now realize why every time my bus driver seems to be acting a little kooky or driving too fast I suddenly am paralyzed with fear. I'm sure it's only a matter of time before I'm whisked away to a random desert somewhere and get stuck on a teetering piece of pointy rock. 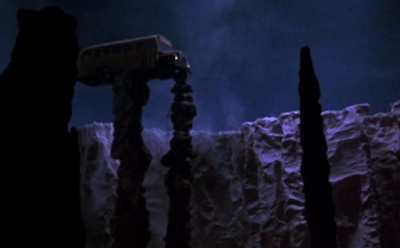 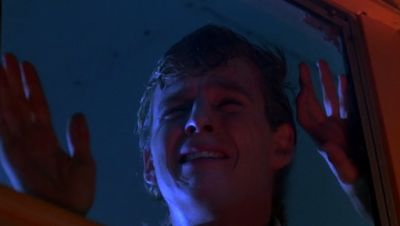 So anyways---Freddy's Revenge has its issues yes, let's get that out there before we go any further. A ton of it doesn't make sense. It's edited weirdly at spots which I assume was an attempt to capture that 'am I still dreaming?" feel of the first film but instead just makes you feel like you missed an important 5 minutes of some scene. For instance, the scene where Jesse is just all of a sudden standing over his sister's bed after saying creepy Freddy things is very sudden and comes from nowhere. I'm also confused by Freddy's new found ability to possess someone AND his ability to be real in the eyes of everyone else AND how he can disappear and reappear at will using said body of someone else. Granted, I understand the laws of pedophile supernatural beings may not apply to regular laws of physics but it still leaves me scratching my head.

I also am confused by the nighttime gym scene. Was the coach on his way to being a creepy child molester as well? Is that what he was going to use the jump rope for? Why does Jesse not seem the least bit worried that he's being forced to 'hit the showers' in the middle of the night by his S&M clad gym teacher? Was Freddy like, 'umm there can only be one pedophile here I'm afraid'? That scene is like 10,000 levels of confusion for me. OH, and why don't the police think it's odd that he was found wandering naked near the site of where someone was just murdered? 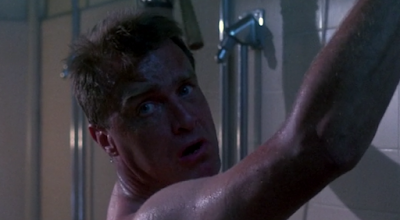 Aside from that and all the other 5 billion things that don't make sense. I still greatly enjoyed this. I loved the hidden homoerotic undertones and I feel like it gives this movie way more depth than people give it credit for. I mean there is some heavy commentary here hidden beneath all the weird rabid parrots and those weird dogs (?) with weird faces. I also give this tons of credit for being a sequel that does something different. It's not Friday the 13th, where the only difference between the sequels seems to be what Jason will use as a mask this time around. It actually took a completely different standpoint---using the idea of Freddy possessing a teenage boy and still sticking to the mythos of Freddy AND gives nice nods to Nancy even without her being there. It's just so creative I suppose, and I dig that man. 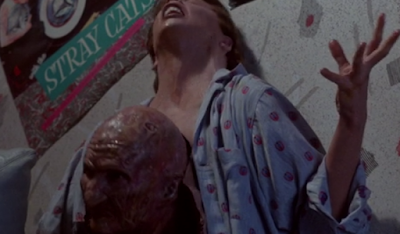 Sure it has it's problems----but I still can't help but love how creative the Nightmare on Elm Street movies are. Is it scary? No, not really. But it's fun to watch and really what more can I ask for? 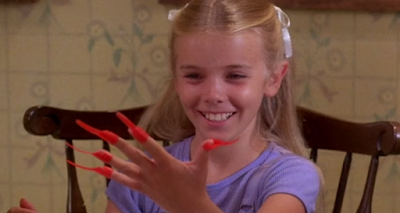 It's a classic of queer cinema.

Apparently star Mark Patton has a documentary about his life and career coming soon.

I first saw this movie at a sleepover when I was twelve during a horror movie marathon, which included the original ANOES. Needless to say, I used to be one of those naysayers who HATED this movie for the longest time, but it has grown on me and I actually enjoy it now. The one thing that I still don't like about the movie is Freddy's creepy amber colored eyes--I know he has the even creepier whitish blue ones in New Nightmare, but those look better than the amber ones IMHO. And I have to say that Ron "I pushed my Grandma down the stairs" Grady is one of my favorite Elm Street kids in the series :) Plus the fact that he's played by a young Robert Rustler (who was a total hottie) doesn't hurt either!