Cujo: Or, That Time I Rescued the Snakes, But Didn't Want To. 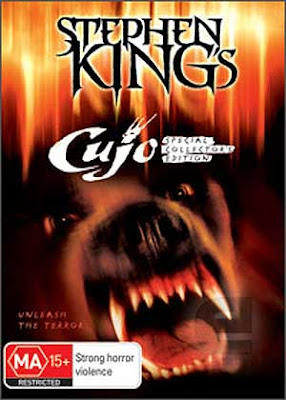 I've been avoiding Cujo since the dawn of man. Taking on Bravo's 100 Scariest Movie Moments list and looking at that list every day to decide what to watch, always created a sense of dread whenever I would get to Cujo. I'd compare it quite easily to the scene where Pee Wee Herman comes across a burning pet store and each and every time that he passes the snake tank makes a disgusted noise and continues on to save some other animal instead. It's not until he saves the monkey, the puppies, the birds and even the goldfish, that Pee Wee finally realizes he cannot put it off any longer. In an attempt to save himself more than one trip, Pee Wee swoops all the snakes at once, runs outside and collapses in a heap of anguish and terror--the snakes scurrying off into the streets. 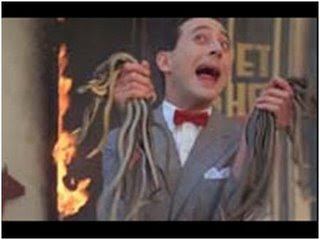 And so begins my rescue mission, to finally and unhappily watch Cujo- which may as well just be called "The dog dies and you feel sad about it".

In most cases, especially when we are getting down to about 5 movies left to review on the list--I know very little about what I am about to watch. All I knew about Cujo was that a big St. Bernard attacks Dee Wallace and her kid while trapped in a car. I was disheartened almost immediately, upon realizing that Cujo is only a mean dog because he gets bitten by a bat and suffers from rabies. Silly old me just figured he was some crazy mean dog. Not someones cute and cuddly pet! This makes everything worse because I'm dreading the obvious demise of the poor beast. But then, something miraculous happened. I realized that Cujo getting rabies is just like a loved one turning into a zombie. They aren't your loved ones anymore, they are zombies and they are going to eat your face. Understanding this fact is key if you happen to enjoy dogs and don't like seeing dogs be mean and get killed. Am I spoiling anything here? I don't think so but I could be wrong. Well I guess if you didn't know that Cujo would eventually have to be "put down" you are just fooling yourself.

Plot wise what is there to discuss? Hmm Dee Wallace has an affair with a smarmy guy, her husband leaves for a while. And of course- after he leaves, Dee Wallace gets trapped inside a Pinto while a rabid St. Bernard prowls around outside. And well that's pretty much it folks.

I was surprised at how long it took for the ball to get rolling. Cujo gets rabies almost immediately but moment of actual attack doesn't come until much, much later. I guess I could do without most of the movie and the Pinto scene was actually done fairly well. I do agree with the Scariest moment on this one because it's one of those, punch the person sitting closest to you moments where you are really not expecting it (Think chum bucket in JAWS). I love how the POV camera makes you think the dog is creeping up behind Dee Wallace and then BAM! Cujo in the window! It's crazy. And all that slobber and blood and eye snot....jeez. That dog was fucking nuts. I like to think I know a little something about rabies, but I didn't know that rabies caused dogs to bite off door handles and bust through glass. I thought animals just became lethargic and stumbled around and bit someone if they were stupid enough to approach. Maybe Cujo is like the Dawn of the Dead remake zombies. He defies all conventions.
Oh. And word to the wise. Do not attempt to watch this film while eating Brie cheese. His eye snots are probably the worst thing to happen since Brundlefly's decaying body. 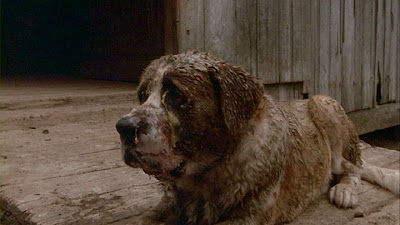 That was some thick, thick snot. Ugh.
One very interesting thing that I did enjoy was that Dee Wallace accomplishes everything on her own. People talk about these women empowering movies and yadda yadda yadda, but no one really talks about Cujo. My first impression was an eye roll when I realized that the husband would be returning at some point and probably to save the day. Dee Wallace trapped in a car after all, does not leave much room for a heroine. But the ending had me very surprised and very pleased. The fact that no one helps her out of the situation except herself is lovely. Even the last scare was taken care of by Dee's character and that was pretty darn impressive. Of course there is that whole woman has affair thing....but well......this incident only proves that she doesn't need some boring husband--or something.
So in conclusion, watching Cujo was less painful than I thought. I didn't love it, but I didn't hate it either. I did find it to be mostly boring and I still felt bad for Cujo, but it's an animal death that you just have to accept and move on with. St. Bernard's were always a little too slobbery for my taste anyways. But oh also-what happened to the kid whose dog it was? Maybe I was caught up in my Brie cheese and missed it but I'm pretty sure he just disappeared. Speaking of which, one thing about this affair situation. The mother of the boy who disappears is obviously trying to escape her life and in the process leave her husband and child. She provides a nice foil for Dee Wallace who simply- deals with things and ends up trapped in a Pinto. In the end however, Dee Wallace's character is capable of living her life without a dependence or without abandoning her son---and that my friends, makes all the difference. But affairs are bad so don't have one.

I think that the boy who owned the dog disappeared because he left with his mother on a trip to visit her sister (and maybe leave her awful husband for good)!!

I think the dog w/ rabies:zombie comparison was great!! I never thought of it that was before, and now makes me a little less sad about Cujo's death! I have a really hard time watching movies where I know animals are going to die, thus the reason I've never finished watching Bambi, Dumbo, or The Land Before Time.

Also, I am a nerd, and looked up the symptoms of rabies, and it seems that both lethargy and mania are usually seen, as well as malaise, head ache, fever, acute pain, violent movements, uncontrolled excitement, depression, and hydrophobia.

Being trapped in a butt-ugly pinto is horrifying enough, with NO air conditioner, ugh, but a rabid dog makes it even worse! :P