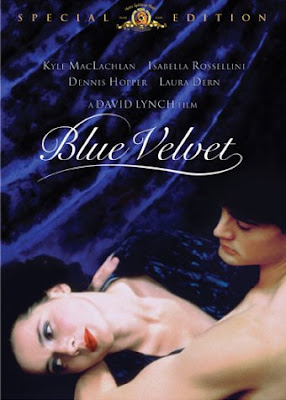 My journey through Bravo's 100 Scariest Movie Moments has come to a close with a 2nd and complete viewing of David Lynch's Blue Velvet. Originally, Blue Velvet was the 3rd DVD that I received when I began my Netflix account back in August, of which the sole purpose was to rent movies on the list that I had never seen before. Perhaps it was a particularly nice day or my head just wasn't in the game--whatever it was I could not for the life of me get past the first 20 minutes without my mind wandering. I attribute this to the fact that you have to be in a certain mood to watch a David Lynch film. I know this because I also attempted to watch Eraserhead not long before my first attempt at Blue Velvet and it didn't work then either. Maybe it's just a summer thing, or maybe I hadn't come to grips with something as strange and unusual as the surreal world of David Lynch yet. But no matter, spring has awoken this ability and I am now able to watch and sort of comprehend what has happened before my eyes.
In all seriousness, Blue Velvet may be the perfect representation of a non-horror movie that sticks with you the way that a horror movie should. The feelings of disgust, brutality and complete and utter fear when Dennis Hopper is involved is quite evident throughout. 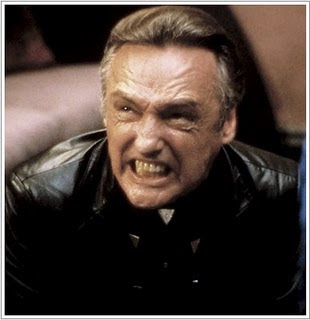 Although Bravo only highlights the initial rape/dry humping/ nitrous oxide scene, I think the thing about the film is that after that scene happens, the uncomfortableness that we felt while it was going on, never truly leaves us.

Kyle Maclachlan plays Jeffrey Beaumont, a young man returning home to his town of Lumberton USA after his father suffers a stroke. After cutting through a field, Jeffrey finds a severed ear 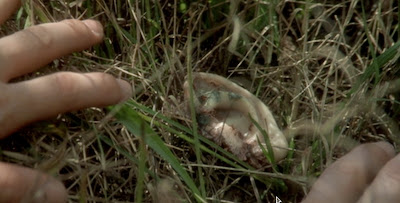 and brings it to the local police. Unable to get any information, Jeffrey is told an important clue by the detective's daughter (played by the birdish Laura Dern) who hints about a nightclub singer who may be involved with the crime. Following this lead, Jeffrey is subsequently thrown into a dark and dangerous world surviving on the underside of this quaint little town. Plus Dennis Hopper is a crazy mother fucker.

Perhaps the most terrifying thing, at least for me, was the sheer insanity that is Dennis Hopper. The rape scene is uncomfortable and painfully awkward. It's one of those scenes that would make you turn red if you were watching it with your parents--heck, I turned red just by watching it alone. I even turned my sound down a little to avoid embarrassing questions from my roommate or worse--neighbors. Aside from the embarrassment, it also does something simply amazing. It puts us in the exact same situation as Jeffrey, trapped in the closet and unable to react or do anything about what is enfolding before our eyes. It is the subtle things like this, that truly make me giddy about films and additionally makes me hope that I'm in a David Lynch kind of mood more often.
The other things I loved were the little touches, little by nature but big in the overall scope of themes. Bug imagery and blue imagery for instance were my favorite. The termites below ground in the beginning, giving way to the overarching theme of the darker, less pleasant side of a seemingly idyllic neighborhood. Then there is of course my favorite thing- a terrible kind of beauty that is evoked when we see a beautiful robin chomping on a bug at the films end. The list goes on- and don't forget about all that blue stuff. From the more obvious song Blue Velvet, and Dorothy's robe- to the less obvious police sirens and usage of Pabst Blue Ribbon. 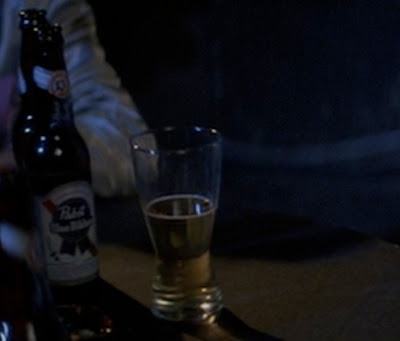 Even the town's name Lumberton has the word blue scrambled up inside of it. It's a blue kind of town and a blue kind of movie. Sadness, beauty, happiness....I never thought until now how interesting of a color blue is- at times standing for both happiness (blue skies), sadness, and even as a form of reward (blue ribbons!). It's all so wonderful and you could sit around and think for days probably about underlying meanings, and symbolism and never get bored.
Even at *gasp* two hours, I found myself enthralled and terrified at everything that was happening and insanely curious to see how it would all play out. There is no big revelation or conclusion or twist about the crime. Pretty much everything we assumed is true and happening- but that doesn't mean the film doesn't keep us excited about the rest of the happenings.
Some of the creepier moments are easy to find, the final discovery of Frank Booth's last victims--utterly terrifying and so strange and wonderful all at the same time. Then there's the insanely weird feeling you receive upon watching pale faced pimp daddy Ben, 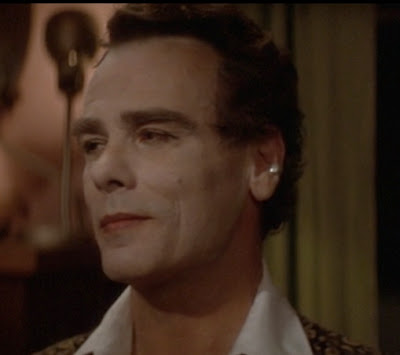 lip syncing into a work light for the brothel and unwilling guests- and BONUS the even more awkward hooker dancing alone on top of the car while Dennis Hopper puts on lipstick and kisses Jeffrey. Good stuff.
And a HUGE huzzah for the return of the marble rye lady from Seinfeld, 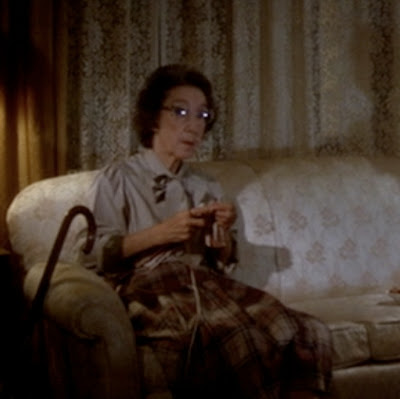 I'm beginning to think she has more cameos than Dick Miller. Also if one ever questions Dennis Hopper's true insanity, look no further than his best friend--Brad Dourif who is probably the surest sign out there of a loose cannon.
Naturally I'm more pleased and thrilled than ever, that I was able to experience Blue Velvet while in the right mind set and I cannot wait to be in a similar mind set to watch some more Lynchian classics. Bring on the cow fetuses and awkward dancing radiator chicks with chubby cheeks. I'm ready!
Posted by Andre Dumas at 8:00 PM

Without a doubt, this is truly David Lynch's best (and most terrifyingly coherent) work on a mainstream film.

You really summed it up beautifully when you described it as "a terrible kind of beauty." True poetry.

One of the great films of all time and an utterly terrifying performance by Dennis Hopper.

(Btw I am sad that Mr. Hopper will be leaving us soon)

I am curious to hear what you think of INLAND EMPIRE should you ever see it. It is very... David Lynch.

It is rare that a film leaves me physically shaky, and this is one of the few films to ever have that type of intense effect on me. The Dennis Hopper sex/rape scene is one of the most disturbing things I have ever witnessed, and even now, a few years after I watched the film, I still find myself feeling a bit nauseous when I think about it. It's definitely a film I have to revisit, but I think, like you said, it's a film you have to be in a certain mood for. I haven't really explored any of Lynch's other work yet (although I want to) as I have a feeling that it's going to have the same kind of intense effect on me, and I feel like I need to be in the right frame of mind for his work.

On a David Lynch side note, I once saw him in person when he gave a talk at Yale about his practice of Transcendental Meditation...it was a bit strange, but interesting nonetheless, and cool to see him in person!

speaking of awkward and embarrassing moments.. I was watching this movie on my own one night when my dad walked in and said "oh it's Laura Dern!" and proceeded to plop down and watch the movie along with me. I had a rough idea of what was in store and was vainly hoping that he would get bored and leave but no dice (I blame it on the mutual appreciation of Twin Peaks that made my dad stay). Needless to say when Dennis Hopper did his thing it was very awkward to say the least. To this day my dad and I shy away from talking about this movie.

Oooh I've had a few moments like that with the rents in the past. God I can only imagine. I guess it's the price we pay to watch a film as glorious as Blue Velvet.