Fatal Attraction: Haven't You Ever Heard of Skinning? That Rabbit is Going to Taste AWFUL. 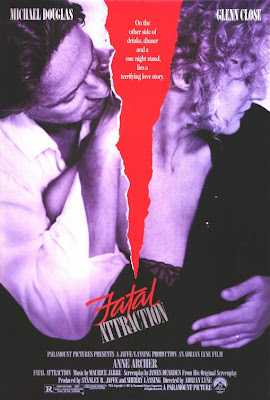 I'm not sure why I put off Fatal Attraction for so long. It was most likely due to a combination of me being sick of seeing Michael Douglas as yet another suit and because I just never got excited over it. I've seen the rabbit scene and that last ending scare more than enough times and since in most cases, the over arching theme of Bravo's Scariest Movie Moments is that there is usually only one sort of scary moment in the whole movie (but they'll put it on the list anyways because they're obligated) ---so I was always very empathetic about seeing this. The interesting thing about Fatal Attraction, is that it's actually a little misogynistic (the first half anyways) if you think about it. I'm no proclaimed feminist, but I'm pretty sure you DID lead ugly Glenn Close on and used no protection (it's the 80s!!). It was almost like everything Michael Douglas did was pushed into a closet while we were made to ooh and ahhhhh over every single psychotic thing that Alex did. There's never really an intended moment of sympathy for Glenn Close's character and well that my friends is just very interesting to me. Or maybe I just was too put off by her face to really feel any sympathy...I can't tell.
Well anyways, more on that dumbass Michael Douglas later. For now let's talk about something much more important. Like for instance, how ugly is Glenn Close? 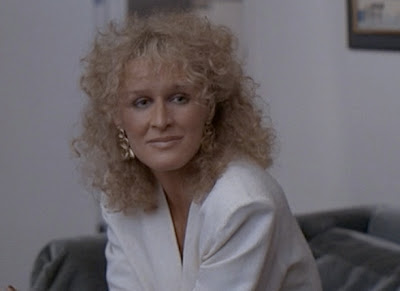 She's suppose to be some hot babe he picked up for a weekend affair? Her nose is much too distracting for me to ever consider her to be attractive and she kind of looks like a man.. but...that doesn't matter because she's a phenomenal actress. Seriously, have you ever witnessed a more terrifying woman? How freaking ridiculous was it that she slit her wrists in mere seconds and then smiled and laughed and pretended everything was okay? That to me was one of the more what the fuck moments out of the whole movie. Forget boiled bunny- that little scene just about took the cake for me. Actually in all honesty, things don't start getting good until well into the second act. Important perhaps in order to witness the sheer degradation of Alex's character and psyche- but less important when you're dealing with people's attention spans. I'll be honest here and say that I was less than thrilled up until Alex really starts doing the shady business. That is when I felt on edge and I was disappointed that I didn't feel too much anxiety leading up to those moments.
The scene where she kidnaps Michael Douglas's daughter for instance immediately kicked things into high gear. The rabbit scene too I guess- but that felt more like just another bat shit crazy moment. A kidnapping where the actual child is involved- and the inadvertent car accident involving the wife- was just.....serious. Every moment after that point kept you on your toes and kept you patiently and agonizingly in wait for that final scene of confrontation. My only problem with the film other than the very slow pace in the beginning and the low level of anxiety--is really just Michael Douglas's dumbness. I really could not get past some of his choices.
For one- why does he need this affair so badly? I get that he's this important businessman and blah blah blah he just needed some zest and maybe a neck brace to match the head honcho's but seriously--what was so bad about his life that he needed an escape? Oh right his daughter was in the bed so he and his wife couldn't have sex ONE NIGHT. 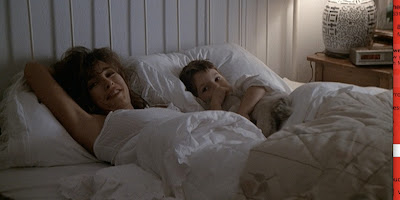 Boo hoo. There were no real shred of evidence that suggested he would even consider an affair- and his choice to begin that affair really makes it difficult at first to feel sorry for him. I would say it makes it difficult to feel sorry for him throughout the duration of the film but once the family gets involved it's a whole other story. Which again, I'm sure is completely intentional but I just wasn't having it.
Also why on earth, after your daughter was kidnapped and the crazy woman is on the loose, why why why--would you not lock the door immediately? She knows where you live because, umm she cooked your daughter's rabbit and it's nighttime which is when scary things happen- so you should probably lock that door you asshole. Sorry I'm being so crass, but come on, that had to be the dumbest moves since Johnny Depp's hip "Futterwhacking" in Alice in Wonderland.
Oh and was anyone else a little thrown halfway through the movie when you realized that his son was actually his daughter?? 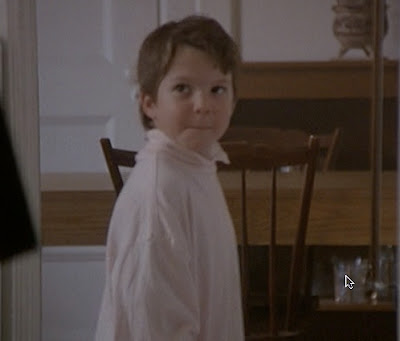 This reminds me of the time no one told me that I had been spelling the word toilet wrong for years. How was I suppose to know? She looks like a boy and sometimes I mistake obvious things for ironic simplicity (a BOY putting lipstick all over his face because he doesn't know how to use it for instance). Sorry I'm so stupid that I can't realize a cute boy who likes to wear pink is actually a little girl with a butch hair cut! 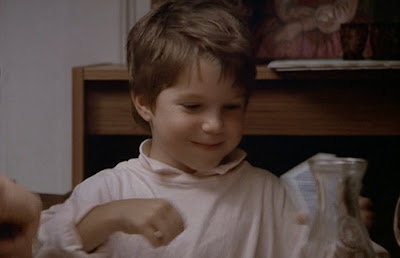 On an embarrassing side note I totally cried when the little girl was watching her parents fight. I legitimately wept because she was so darn cute and honestly upset over the whole thing. Ah children.
Now onto to what everyone talks about, the ending. It really stressed me out. It was entirely well done from that amazing shot of Glenn Close in the steamy bathroom mirror, and the way she was slicing her leg with the knife and how the blood dripped onto her feet and how Michael Douglas couldn't hear anything because of that dang whistling tea kettle. The shot of her in the tub and even just the shots of the overflowing tub and the dog licking up the water on the floor below--good stuff. What the film lacks in anxiety in the first act, it more than enough makes up for it in the second. By the time the credits rolled I had to go pour myself a glass of wine and just breathe. Bravo may mess up a lot of things on that list but something tells me (like my rapidly beating heart for instance) that they made the right decision on this one.
Posted by Andre Dumas at 7:45 PM

I read somewhere that the film actually ended with Alex's suicide (hence the Madame Butterfly allusions early on)but the audiences did not like that so they added the fake out/bathtub ending.

No doubt this is a very misogynistic film. Alex is a nut case, but Douglas' character made the choice to pursue her. So of course she became the "monster" - that said, I think Close did a terrific job - some metal band (can't recall which one) even did a song about her character, they were so enamored with her crazy ways.

Thank GOD someone else noted how ungodly awful she looks in this film. She looks haggard and has non existent brows

I'm so glad you pointed out that the daughter more closely resembles a boy in this movie. I was thrown for a loop when watching this, so much so that I paused the movie, stared at the television in disbelief, and then promptly pulled up the IMDb page about this movie. They could have at least had her wear a dress or something to give us more of a clue early on.

This was just like the time I was watching Panic Room and I thought Jodie Foster's daughter, played by Kristen Stewart, was a boy.

I think a ugly mistress is actually more realistic. We always expect the mistress to be hot but in reality men try to pick the good looking ones to be the person they wake up to everyday. When it comes time to cheat.. Ehh anyone would do for a bit of excitement. At least that is something I noticed in real life.

From my experience, as a lover, not proud of it but oh well what's done is done... Men don't reall need an excuse to cheat. I mean he had a good marriage, but Alex was pretty much putting it all out there, and well what's a guy supposed to do when a girl is offering herself to him. We would love them to pass, but most of them don't. I liked the movie and men should watch it and think about it twice before they go fooling around. Maybe the girl wont turn psycho, but could still give him a really hard time.

Thank you so much for putting all of my thought about this movie into words. If I didn't know better(and from the witty and spelling error free writing, I do know better) I would think I wrote this. Even the comments about thinking the daughter was a son and being distracted by Glen Closes' ugliness were taken right out of my mouth! Great review, I'm totally coming to your blog the next time I need validation in my thoughts on the ridiculousness of Micheal Douglas.

I agree with you on everything but spelling and punctuation was deplorable. I would have never taken you for a writer. The only reason why I found this blog,is by googling, "who is the ugly kid who looks like a boy?" Fooled me too, first time. Not to mention, Douglas is supposed to be a lawyer in this, I thought. Hasn't anyone ever heard of A RESTRAINING ORDER? WTF ?