Sleeping With the Enemy: When We're On the Bad Guy's Side

There’s a phenomena that’s taking the world by storm these days. We barely realize that it’s afoot when something huge happens. Think of it as how you would feel if a dog had to be shot because it had rabies. Yes. I sense you are close to my epiphany. Every now and then we are given a character that by all means would be labeled the “bad guy”. The person who does the killing in a movie about killing people. The enemy. The only difference is—we care about them. We form a bond with them from the beginning and when their day of reckoning comes, we sit in a corner and cry. A lot.

I realized that I had to make a post about this subject the other day while adding The Talented Mr. Ripley to my queue. 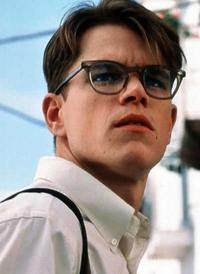 A fabulous movie that a lot of people forget about, but one that perfectly exemplifies the very topic I am about to discuss. Thomas Ripley kills people, he impersonates people, he lies—he does bad things, but we care about him because he is likeable. We form this invisible bond with our main character due to our proximity and because he’s just a sympathetic kind of character. Our hearts race every time he is on the verge of being caught, and we wince whenever he makes a vital mistake. We are rooting for the bad guy to win and it’s very strange when you think about it. This is something that doesn’t get accomplished all the time- although it may try to, but fail miserably. In fact, if you tried to root for the bad guy in a movie where this phenomena does not occur, people may try to get you shipped off to a mental institution or worse you may cry. So let’s take a look at some other bad guys that you end up loving, caring about and in some cases, wanting to date. 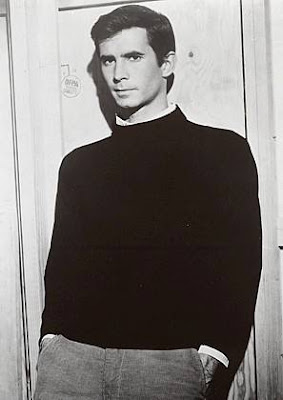 Norman Bates may be the precursor to Thomas Ripley, although the love we feel for him isn’t as strong and I would even go so far as to say that we are mislead into liking him. The twist is to blame of course and although most of us still love him dearly, the rest of us can’t seem to shake the image of him wielding a knife and wearing woman’s clothing out of our heads. 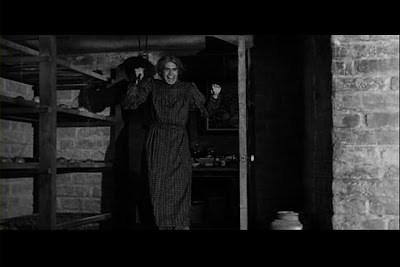 There is one moment in particular however that both proves and disproves the phenomena. After Norman comes in to find Marion’s body, he takes great care in cleaning up and finishes of course with the dumping of her car into a swamp. The car is about to go under when it suddenly stops sinking- and we feel worried. We care about Norman not getting in trouble because he is both a sympathetic character and because at this point, we are made to believe that Norman didn’t do the killing. We think to ourselves that there is no way that Norman could possibly be punished for something that his crazy ding bat mother did. However like I said, this is sympathy being toyed with and by the end most of our feelings tend to change. There may still be a few of us however that just love that Norman Bates and still feel for him and his erm...personalities. Mark from Peeping Tom is very similar to this— 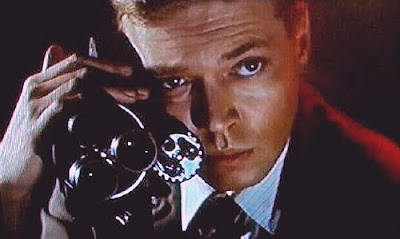 the video tapes of his childhood and his all too gentle personality are enough to make us side with this voyeur enthusiast. 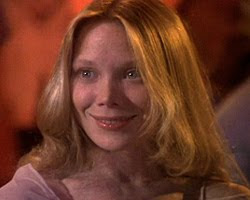 Carrie White is another special case, as we realize pretty early on that the real bad guys are those asshole classmates. Even with this being true, Carrie is still often feared or labeled as the villain. Since we are so close to Carrie, and get a close up view of how mean her classmates can be- we do find ourselves rooting for Carrie’s freak out and mass murder. 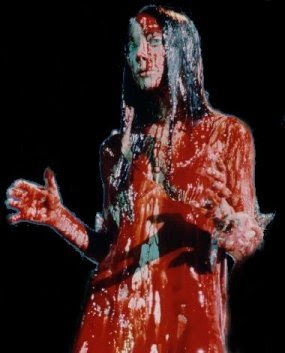 This is different than rooting for a serial killer to kill off those annoying brutes in those wonderful slasher movies, because we care about Carrie. Sure the prom massacre is entertaining but it’s not the point of the whole movie. It’s necessary because we understand that it is. Carrie deserves to get her revenge, and we are saddened at the film’s conclusion because we cared so much. I guess all those asshole kids were right, Carrie White really does burn in hell. Even though she doesn’t deserve it...darn that Jesus and his rules!

Now, as a side note before you all yell at me--I will tell you I am not including the following character's on my list. I speak of those characters that turn into the bad guy because they have no other choice. Yes I speak of vampires and werewolves. 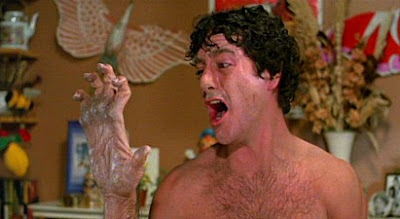 Those poor beasts who would like nothing more than to just be themselves but are instead forced to feast upon the flesh of those around them. Because this kind of sympathy has less to do about their character and more to do about their particular disease- I’m gonna have to say that these characters although worthy of our warm thoughts do not quite fit the mold. The one exception may be Eli from Let the Right One In, who is a different kind of vampire for sure. 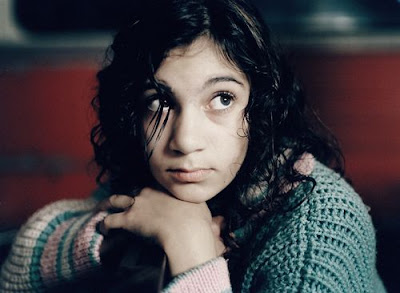 And even more so- the beginning scene of Hakan stringing up the guy to get a nice bucket full of blood is Psycho-like in that we are worried that he will get caught. We don’t even know who the guy is but yet we are immediately made to feel on his side---and that my friends, is pretty impressive. Oh and for all you animal and Cannibalistic Humanoid Underground Dweller lovers, I would also include tragic beasts like Cujo, and yes, the CHUD's in this category. It’s not really their fault after all. 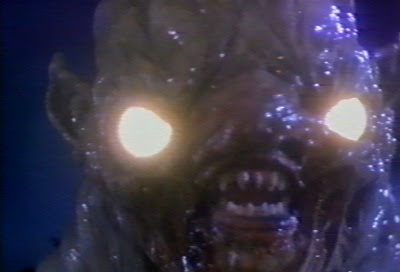 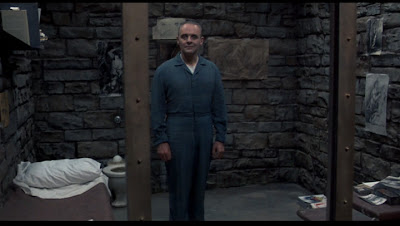 Hanibal Lecter is a good example of a bad guy that we care about, not because he's misunderstood but because he’s just so damn cool. How can you not be in love with him? He’s smart, witty AND eats people? Sign me up. Just kidding. But in all honesty- Hannibal Lecter is just a great character, and one that may not be the central bad guy- but certainly gets immediately labeled as the focal point. 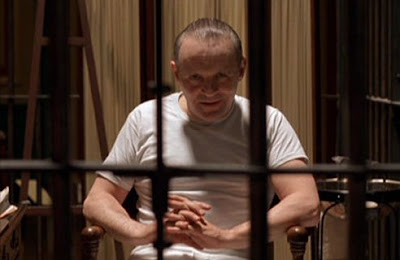 And finally in my opinion one of the greatest fails at making us fall in love with the bad guys—The Devil’s Rejects. 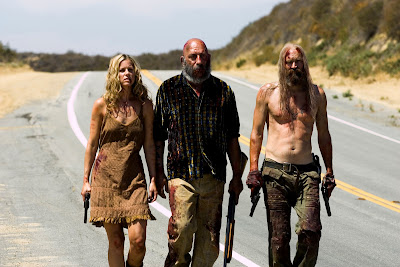 I know many of you may disagree but the turn in whose side we are on in this film just doesn’t work. Sure it’s debated whether or not we are actually meant to feel sympathy for the Firefly’s but it seems to me like RZ did intend for us to feel bad for the Firefly’s and what they are put through. I’m sorry but I really didn’t give a crap what kind of staple in the gut torture these three were put through because I never felt that connection with them. Sure we are closely following them throughout the movie and that connection should by default be formed-but it’s not, because there is never justification for the things that they do. Think of it in Carrie White terms. If she was the popular girl in the school who was nothing but mean to people, then made to look a fool and then killed everyone out of anger and embarrassment, we wouldn’t give a crap. I’m sorry Firefly’s but you just don’t fit the bill! On a side note, the same could almost be said for RZ’s Halloween. It was almost as if by showing us such an in depth look into Michael Myers life, we were made to feel sympathy for this serial killer who just had a bad childhood. But then in Michael’s serial killer life—all sympathy is immediately erased so there goes that theory. Rob Zombie can just not be trusted I guess.
Posted by Andre Dumas at 1:47 PM

"Rob Zombie can just not be trusted I guess."

If I ever get a tattoo, that's going to be it.

Hahah might I suggest getting it displayed on your....forehead? Buttocks? I can't really pick a good place but I trust your further judgment!

I always think back on the scene in Psycho when Bates is lowering the car into the water. At that point, you don't necessarily realize it, but you're holding your breath and rooting for it to go all the way under so Norman won't be caught. It's such a fantastic protagonist switch and something that makes Psycho a true masterpiece.

I would add Orson Welles in The Third Man. And maybe Dr. Herbert West in the Re-Animator movies. He's not the good guy per se, but he's also sort of a victim of university politics as well as a not-so-nice guy in general.

I see this a lot with Benjamin Linus on Lost. Some Lost fans have woobified the hell out of him though, and I'm not totally sure they understand while he's a genius and an awesome character, he did kill a lot of people.

Tom Ripley probably isn't even Tom Ripley. He's like whatever the alien frozen in a block of ice in "The Thing" was. Whatever you're liking, or feeling sorry for about "Tom Ripley" is you. That's why Damon is awesome and I ain't. He gives sociopathy a too-true face.