Jerusalem's (Salem's) Lot: Wait... I Thought This Was About Jews in Maine? 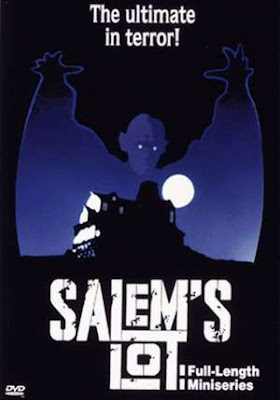 Yes that is correct. I have finally finished the uber long made for TV extravaganza that is Salem's Lot. Now you know me and my short attention span to movies that are longer than an hour and 30 minutes, so it was no surprise that I had to watch this in a few installments, with a few dance breaks in between. Once all is said and done, I find myself only getting angry at how many outstanding moments of horror are present that are bogged down by the length and the soap opera like tone of the freeze frames and "scary music".
It made me think how Salem's Lot would be if all the scary moments were kept alive- and possibly made scarier (without extraneous CGI) AND if it were cut down to the good old hour and a half of perfect viewing time. A pipe dream perhaps and even though most of us hate remakes (listen to the latest Vaultcast at the Vault of Horror featuring ME for more info on why you should lighten up on the hatred) I think Salem's Lot deserves some actual movie cred. Before we get into that let's just talk about what I thought, shall we?

Having just finished the book some odd months ago, I was greatly intrigued to find out how one of the creepiest books I had ever read would translate on screen. I figured since it was so long they would make time to build up characters and their relationships, but for some reason this never happened and I found myself wondering what actually happened in those 3 hours? It's tough to judge a made for TV movie in movie standards because the same rules just don't apply. Aside from the obvious TV soap opera-like blunders like the bad music and freeze frames, it did do a great job of capturing the incredibly off putting and creepy tone of the vampires. The window scenes were great- although I could have done with one visit from Ralphie Glick instead of 20, but still, was there ever a better way to make people fear windows? 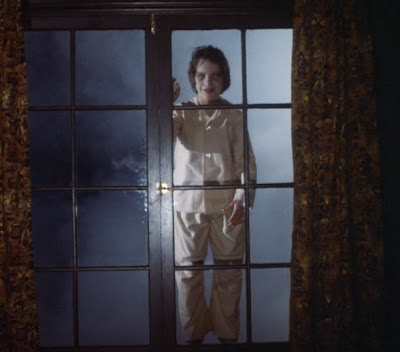 As you know from my random post Sunday night, the first appearance of Barlow practically made me pee my pants. I even screamed out loud.
I will say it was kind of a random point to have him appear, and I'm not really sure why that decision was made, but it was terrifying and I guess that's all that really matters. The Nosferatu like appearance of Barlow is a decision I can whole heartily agree with and getting that face shoved in your face without any warning is both cruel and wonderful at the same time. Thank God for vampires that aren't attractive. 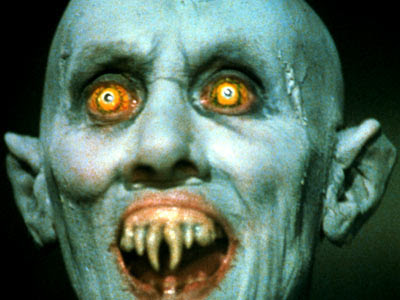 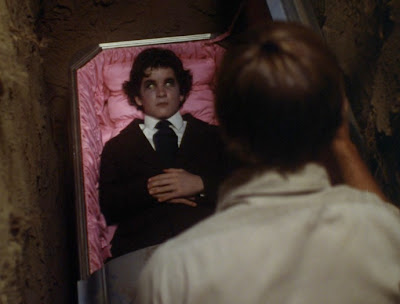 You may be noticing a pattern in that all the good things I have to say about Salem's Lot have to do with the way that the fear was handled. The rest of it however is questionable. Here are some things that I didn't exactly love. I missed the real camaraderie that happens between Ben, the teacher and Mark Petrie. Also, since when was the teacher 80 years old? I guess that explains how he got a heart attack- but I prefer the idea of him being younger and getting a heart attack because what he saw was so frightened not because he was so old. Speaking of ages, Mark Petrie also felt way too old. I wanted him to have a more bad ass little kid kind of role. Although the main relationship that ended up fleshing out in the film was Mark and Ben's it still felt static to me. There was a strange almost disconnect where I just didn't believe they even really liked each other. There's no room to make the connection that are alike in their imaginations and that really bothered me.

Perhaps the thing that threw me off the most however was Susan. Here we have the possibility of a great and tragic relationship--that just gets completely destroyed. All we basically know is that they had sex at the lake and then she went to find the vampire and disappeared. We don't see her again until the last 5 minutes of the film- and she's in Central America showing up one day on Ben's bed,wearing a silky vampire night dress. How is she getting around, and why are we just throwing in that relationship like it was this huge thing. To me, it just wasn't justified. I would have much rather liked a more dramatic staking Susan through the heart scene! The ultimate crime of passion.

Speaking of staking vampires through the heart- the death of the vampires was a little.....easy. I'm not saying I'd raise my hand to douse them in gasoline and light them on fire--but let's just say that it is easier than finding the hiding places of the vampires and staking them each individually. I had this great picture in my head of Mark and Ben emerging from the houses covered in blood, with an intense look of being severely emotionally exhausted. The actual action of staking a vampire like that is one of the most brutal things out there. It takes serious guts and the whole lighting them on fire thing is just so throw away to me.

And now for the moment you've all been waiting for--here is where I talk about George A. Romero. Originally slated to direct the made for TV movie, Romero enjoyed the final product but greatly detested the way that Barlow became an attack dog for Straker. This is insanely true because Barlow is the real villain. Taking him and making him obey Straker and not giving him a real voice and what not, greatly hinders not only his role as a vampire--but all the vampires in the town as well. And forgive me but, the whole thing is suppose to be about vampires!

So in conclusion, I did enjoy Salem's Lot but I think it had the potential to be much, much better. This is my proposal: Will some fantastic Spanish director (I'm talking to you, the guy that directed I'm Not Scared) please make this remake happen and make it good. I want the poetic nature of how utterly terrifying a ghost town really is. I want to be both terrified and ecstatic about what is happening. I want to feel a connection to the characters but not the entire town. I want it all basically--and I know I probably can't have it but a girl can dream can't she?

P.S. what is the deal with the holy water that glows blue whenever a vampire is nearby?What is that? This isn't Lord of the Rings people. 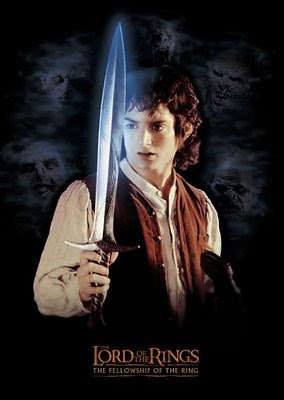 Humans already have an advantage by vampires not being able to go out in the sun--let's not give them an even greater advantage mmmk? Oh and P.S. again--I think I remembered a few vampires opening their eyes and being all....fine and dandy in the sunlight? Not possible. No sparkling allowed.
I know many of you will be upset with me and that's A-OK. But this movie is largely a deep breath of nostalgia and forces you to remember when you saw it as a young one and just how scared you really were. I'm not saying it's not scary--I'm just saying it could have been better. And it could be better if you just let me make the damn movie....with the help of a superb, preferably Spanish director. That's all I'm sayin'.

Also, if any great Spanish directors see this and want to collaborate, let me know.
P.P.S. I hope this title misinformed other people as well. When I was little and reading book covers at Stop and Shop, I thought this was about witches. Jeesh Stephen King...be a little more confusing next time.
Posted by Andre Dumas at 10:33 PM

Dud you see the recent TV version with Rob Lowe, it stuck much closer to the original novel, and I love James Mason but the newer version felt truer to King's vision IMHO!

I have not seen it- I've heard pretty terrible things about it actually. I don't really mind that this version isn't a lot like the book but it could have used a few more classic moments of fear to spice things up--and break up the awfulness that is the TV movie feeling.

This movie has it's moments, but as someone who holds the novel in very high esteem, ultimately it let me down. The remake was dreadful (IMHO).

If you can find it, there is a terrific BBC radio drama of 'salem's Lot...it was made a few years back, and they set it in the mid 70's (as the original novel was), so you get a lot of great 70's songs as back ground. Do a Google search, that's how I found it, and downloaded it. It's probably the most faithful adaption of the novel.

I haven't seen all of this one yet. Like you I can't watch such a long film in one sitting, but then never seem to follow through with my pledge to finish the thing. Being such a fan of the book, too, I often start to cringe while watching it (this happens with most of King movie adaptations), which probably helps fuel my decision to switch if off after a while. One of these days I will sit down with it, however, and finish it, maybe after I re-read the book one more time.

I did read up on that Pax, I shall someday venture off to give it a listen! I'm glad you felt let down because it makes me feel less alone...people freaking looooove this tv movie shindig.

William, I've recently accepted that fact that the books will never be like the movies because they are just two different mediums. You can do things in books that just won't work in films. This more than anything has allowed me to like a lot more Stephen King movies than the typical fan. But I think Salem's Lot had too many great moments in it and with 3 hours I would think that most of them would be included!

I can't really agree or disagree with you. I haven't read the book yet. Reading your review, I read things that didn't sound familiar. I've seen this numerous times and thought that was a bit odd. After a little research I discovered there actually are 2 versions available. One is obviously the one you saw. The other is the one I've seen called Salems Lot: the movie. The movie version is actually only 111 minutes long, and moves along pretty well. It still has the freeze frames and what not. You may want to look into it. Not sure about availability, mine is an old VHS. All in all great review.

I have heard about the movie version, but I never believed in it much since this was meant to be a mini series and not a movie? I think that's why I went for the whole enchilada.

Pax Romano, thanks for recommending that radio broadcast! Sounds excellent! I'm searching now and will probably listen to it while at work.

Oh, you brave lass. You fared better than me in watching this thing. I gave it a go a couple of months ago, and frankly, I found it excruciating. James Mason is no miracle worker.

Better luck with the other adaptation.

I watched this too, recently. 10 minutes before bed each night.

Your point about Barlow is dead on, but this film did get something very right about vampires -- the eyes. I don't think I've seen better or more striking vampire eyes in a film since.s