Manic Monday: I Knew There Wasn't a Garbage Disposal in My Kitchen for a Reason. 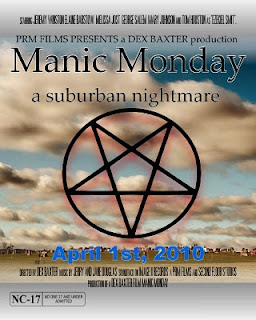 Well you better believe it. Last night, I of all people, got to see one of the first showings ever of a movie. What does this mean exactly? Was I one of the few people that didn't have a blossoming social life and was able to attend such an event? Pssssssh hardly. I personally like to think that, well, that I was just in the right place at the right time. Being invited to such an event is quite terrifying for more than one reason. On the one hand you could be sat down to watch the next big thrill in horror movie history. On the other, you could be sat down as a joke and be forced to watch some grotesque form of pornography involving rabbits and albino midgets. Don't ask. Luckily for me, and all of you, this was actually amazing. Think Paranormal Activity proportions well before the hype monster stole it's thunder.


Manic Monday follows the story of the Gamble family, a seemingly normal middle class family who like most of us hiding a little something in their closet. Board games of course! We all have them. Anyways, the daughter one day accidentally opens a portal to hell while playing with the Ouija Board, and it's up to her parents to save her and well... the rest of humanity as well. Hmm perhaps it's better going into this without knowing every bit and detail about the plot so I'll just stop there. It may sound outrageous but believe it or not it's a plot that completely works.
I've found myself as of late, being a bit jaded by everything that I've been seeing, but Manic Monday has re-instilled my faith. This movie was for lack of a better word--incredible. The fear and terror is something that kind of starts early on but in such a subtle way that you almost forget it's scratching and ready to come out. By the time that climax kicks in, you better hold onto those sodas. And I'm not just saying that because I did actually drop my soda (my hand was slippery from the butter on my popcorn.....or NOT because I won't spoil which part but it literally made me flip a shit and hence drop my soda..which was both depressing and embarrassing at the same time) Anyways. As you all know I am a firm hater of movies that rely entirely on jump scares. Manic Monday however has broken that mold. The horror that you feel and the fear that you feel is so real and so genuine, that it almost feels surreal. I honestly cannot remember ever feeling this scared while watching a movie.
One thing that really stood out was this enigmatic character of Ezekiel Smit, the Gamble's neighbor. He seemed like a crazy hybrid of the Tall Man, the scary skinny thing in REC and Al Pacino. Don't ask, just trust me. His performance literally made me wince sideways at the screen which you know means I was so disgusted and terrified of him that I hoped turning my face away would hopefully save me from his wrath. The other performances are great but Tom Huston as Smit really stood out to me.
Notable moments that I hope will entice you are- the sudden and unforgettable appearance of Dick Miller so what if it was just a picture of him (it elicited an actual "ooooh!" from me. Again, I embarrassed myself a lot during this screening and I'm proud of it), the garbage disposal scene which I owe my post title to(Freaking RIDICULOUS. In a good way of course) that even includes the so strange it works addition of Aerosmith's Dream On in the background and last but certainly not least the showdown at the end. 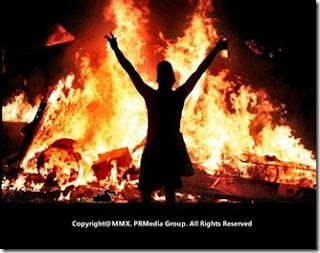 I'm trying not to give too much away here because I'm really worried that this film will meet the same fate as Paranormal Activity. But since Manic Monday does not contain an annoying couple with a strange excess of money and an excess of night vision camera work, I think Manic Monday will be okay.
As we were told at the beginning, the studio is trying to keep an extremely tight lid on this, so there is little to know or find out about when using the Internet. We were given stills, and a short press release while the rest was left to us. I'm not sure how widely this will be distributed, but my guess is very narrowly. If you do see this playing somewhere near you please do yourself a favor and check it out immediately. Words can express how terrified, excited, exhilarated and just pumped I was upon exiting the theater. There are more terrifying moments than you can count and for once it's not about the sound effects or jump scares. This is pure and un-tampered with terror. Horror fans will be floored by the film's ability to create subtle homages to favorites like Hellraiser and Poltergeist without ruining or stealing those film's legacies. Each little homage is just that, a homage, and the film takes it and makes each and every moment it's own. This film is not to be missed, so catch it if you can..!
Posted by Andre Dumas at 9:00 AM

Glad you enjoyed it as well - if this ever goes into wide release, people are going be lining up for blocks to see it!

Sorry about the spoilers there. I didn't realize that cameo was supposed to be a secret. Amazing film though.