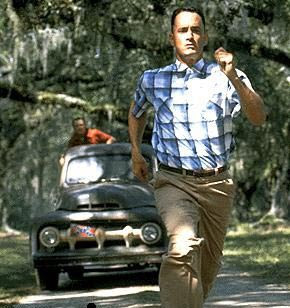 Well today is Patriots Day--did you know that? Did you also know that there are several Porta Potty's set up on my street? Yes! Why? Why because it's marathon Monday of course! Here in a Boston there is a long celebrated tradition of people wearing short shorts, and pooping all over themselves at the finish line. Even Katie Holmes runs it sometimes! It's like wicked famous guys, and they run right by my apartment. I'll snap a pic of all the cool celebrities and that really old guy that once visited my class in 5th grade....
Anyways I figured that since today is all about running- and a lot of horror movies usually involve some bitch running. What better way to combine the two than running in the marathon while I type out my favorite runners in horror movie history?
Babs- Night of the Living Dead 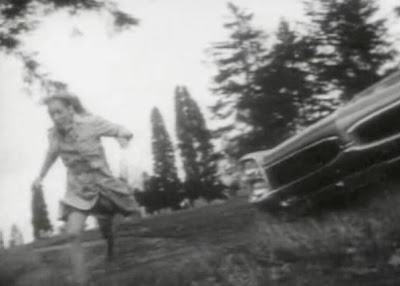 I guess the distance that she runs isn't terribly far- but she does run barefoot, which many aspiring marathoner's hope to someday do. Now I'm not one for the barefoot school of running...mostly because I'm for no schools of running because running is the worst-- but I have to give Babs props where props are due. This woman is annoying but she did run from a zombie, barefoot. Do you know how many pine needle and twigs she must have stepped on? No wonder she was in a catatonic state for the rest of the film. Run Babs run! 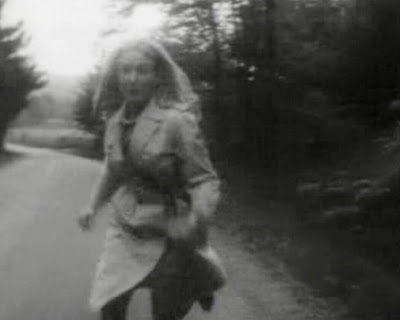 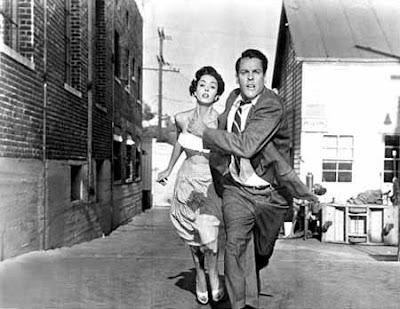 They should have a pairs division in the running department. Oh wait that's just called running with a friend. I forgot. In this case however, these two did need each other to endure their flight away from everyone in society, otherwise known as the day the world became overturned by pod people. Don't you have those dreams where no matter how far or how fast you run, you find that you are going nowhere fast? And that all those bad things are still going to get you? Well that my friends is the story of Miles and Becky's life. But at least they had each other.
Ellie Sattler- Jurassic Park 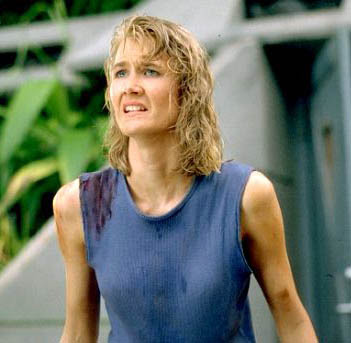 This may be one of my favorite running scenes ever. I just love the intensity on her face and how she yells at herself to RUN. And she has the flashlight or whatever attached to her leg plus she was just attacked by Velociraptors. It's a perfect example of one of the most fearful instances of running...the kind where you know something is behind you but you cannot under no circumstances ever look back. Amazing.
Diane Freeling- Poltergeist
If Ellie's run from Jurassic Park was one of my favorite running scenes, then Diane's little jaunt down the enchanted hallway in her very own house IS my favorite. Did you know that when I'm in a hotel or somewhere with a really long hallway, I act out this scene? Oh yes you bet I do. I can rewind and fast forward this scene millions of times and never get sick of it. Something about how the extend able hallway pounds your heart 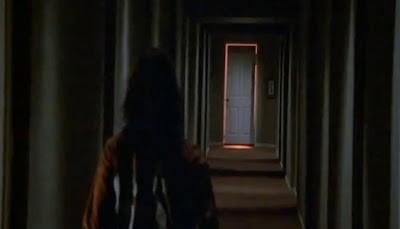 and then how the drums of the soundtrack kick in and how Diane's steps get harder and harder is just remarkable. 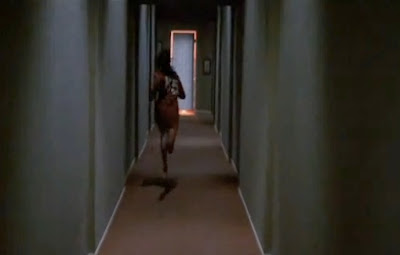 She frickin hauls ass down that hallway and I love every minute of it. What can I say, Poltergeist is my #2. Yes. My #2 favorite movie ever. And yes in order to watch this scene you must first watch the (real) skeletons in the pool scene! Hooray!
Pat Hingle- Suspiria 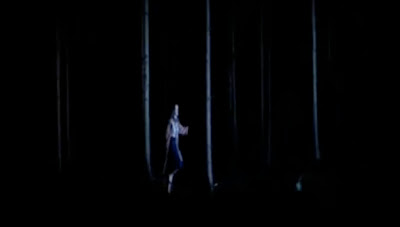 Pat's death is my poster child for beautiful blood, but her running scene in the very beginning of Suspiria is pretty spectacular. I've always loved that we have no clue what she could possibly be hearing or seeing- but we do know that it must be terrifying. Something about a young woman running through a German forest on a dark and stormy night always seems to strike a chord with horror movie aficionados. I'm guessing it could be her white t-shirt- or maybe her insane look of pure terror and mania. It's all so wonderful.
School Children and Melanie Daniels- The Birds 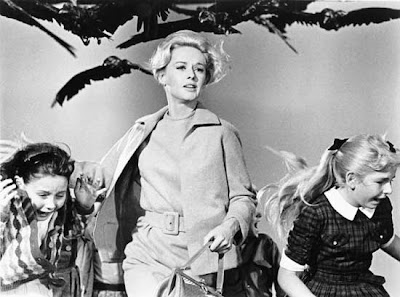 Perhaps one of the most famous running scenes of all. I remember seeing this scene for the first time at Universal Studios in the Alfred Hitchock tribute thing- the very moment that lead to my intense fascination with the master of suspense and the moment that I decided I had to see The Birds. This is one of the purest forms of running caught on film- because it's the kind of running that you have to do. I'd imagine that you would not be able to stop your legs from running even if you wanted to- since the importance of survival when put up against a massive flock of crows is extremely high.
Sally Hardesty- The Texas Chainsaw Massacre 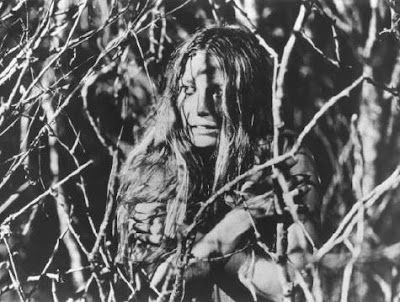 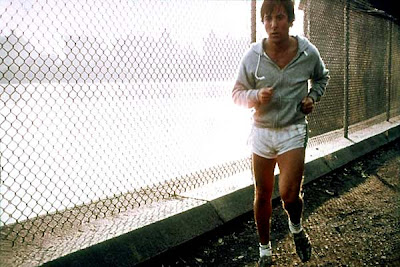 And of course what would a list about runners on Marathon Monday be complete without our very own marathon man? When I first started watching this I thought to myself..."what is this marathon man business? Dustin Hoffman looks like a pretty crappy runner to me." That is until you see him out run thugs and jump over fences and highway overpasses and just crazy shit. For real...Babe is the real deal. In most cases when watching a horror movie you are often left scratching your head at how our protagonist can run for so damn long? I can run 30 seconds max-- a minute if I load up on carbs. Marathon Man however, is 100% justified because Babe does run marathons and therefore we know that he will use his skill to advantage and use it he does! If I was to run in a marathon someday (psssssh running! HA) then you can bet that my inspiration would be this scene. Helllllllz yeah. Epic running after a serious teeth drilling starts around 6:00
Posted by Andre Dumas at 9:11 AM

Oh you Bostonians and your Patriot Day...

But seriously, Sally vs. Leatherface in TCM is THE ultimate horror movie chase. The alpha and the omega. It goes on for so long that it becomes funny, then become serious again, then becomes funny again, and serious one more time. It's that long.

I'm a firm believer that if you want to survive a horror movie you really need to get stuck in to some cardio. That's the only reason I run!

Hell yeah Sarah... get that cardio in. Unless you're being chased by zombies... then a brisk walk should be enough.

I cannot pass up a blog post on running in films without bringing up Forest Whitaker. Around the time of The Crying Game, Whitaker was running through, well, forests. I believe in that very same movie he was managing his escape just as he was hit by a truck. >_< Yowza! Not really horror related. Just weird.

As a kid, I always used to join in the old "oh please, why does the girl always fall when running after a killer" criticism, but truth be told, if a due with a chainsaw was chasing me throw untamed woods, I'd be face down most of the time and cut to bits sooner than that.

Also, my favorite anecdote about Hitchcock comes from The Birds. The young actress who plays one of the kids once talked about how she was really nervous to film the scene where she gets attacked because she was afraid of actually dying. Hitchcock, in his dry bass, said to her "Don't worry dear: it's your last scene in the film."

Oh! And one scene I'd add: the opening of 28 Days Later. Carlyle moving his short legs like the wind as a horde of infected chase him to kickass music. Amazing.

What an incredibly awesome post! And coming from the Bostonian least likely to run anywhere.
; )

I kinda want to rewatch all of these now. Maybe next year we can have a marathon during the marathon.

Thanks all- love the suggestions esp. 28 Days Later Emily- which I remember thinking about and then must have forgotten....blasts!

Chris... YES. watching the marathon was like being in college again aka the worst. Way too many drunky bro.s I'd be down for movie watching instead anyday.

1. Valerie Bertinelli but she was too slow and i got bored waiting.

great post! i always say i never run unless there is something/someone chasing me!

Pat Hingle? Seriously? Was Argento into crusty character actors or something?