A Nightmare on Elm Street: Or, Crank, the Untold Story. 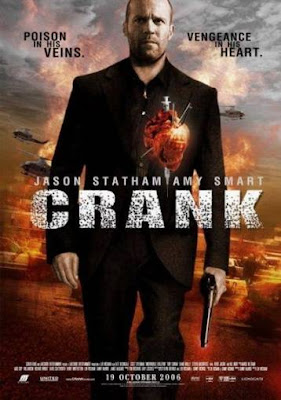 Maybe it's the original lover in me, but I always felt that Freddy's draw to Nancy is, she was a fighter. She wasn't about running away, screaming and begging for her life. She was ready to take his ass down.

The thing between Freddy and Nancy is the remake was a bit unsavory.

(Dear people don't read below this because it's a spoiler but I need to get this out of my system to someone who has seen the movie, join in if you have seen it cause I want opinions on this.....)

So maybe I'm completely wrong and read this the wrong way, but um...what I gathered was Freddy just wanted Nancy to get to that final coma stage so he can well fuck her. Other than the ick factor, I just felt that was kind of an off the charts direction to pull the movie in. Help me out and tell me what you think (we can do this email exchange to avoid spoilers)

Very interesting analysis! I've been kinda wondering what to think of the remake, but I'm feeling cautiously optimistic now-Thanks! I think it will be scary (though if I understood correctly what you were talking about, I will probably be upset...some things shouldn't be shown). Rob

Thanks for the review, Andre. I'm hoping to catch this on Tuesday night--HALF PRICE, BABY!--so thanks for giving me some info to go in with. Sounds like Nancy is another Rob Zombie-style made-over final girl? Why do all these girls suddenly have to be such tortured, misunderstood (and slightly unbathed) souls??

And I'm sorry, but any audience that would laugh at the bathtub and body bag scenes are clearly a bunch of post-modern hipsters and/or iPhone-addicted millennial teenyboppers that I would not want to be associated with, thank you very much.

She wasn't even a final girl, B-Sol. And that's what angered me the most! To loose the true essence of Nancy or any girl in peril in a slasher is to completely loose me and I'm sure a few others.

I had the same audience laugh at the same scenes as well. I had to wonder how many of them actually saw the original. I could tell, not too many.

Amen Andre, as you know already, I agree with a lot of your points. This film had its problems but hey: they tried new things, kept the essence of the original in both story and (mostly) character, and didn't wimp out. Yes, the CGI was terrible, Haley's Freddy was a tad uneven, and Nancy didn't have enough spunk, but I had fun.

And on Nancy, I liked that they made her awkward and artistic (actually let me take that back; my cat drew me a picture and it was better than her stuff) but I think they should've gone further with her being nerdy and brought her our of her shell more dynamically. Tehre are hints during her conversation with Quentin about how he often asked her out and she says something like "it's not my scene," leading us to believe she's the shy weird girl (fitting considering her past) but yeah, give me more.

And as for preschool, I really wish the kids were 4 and not 5. I too remember 5 well; 3/4 would've made more sense from a memory standpoint.

So wait, Jason Statham stars in this? I hope he doesn't play Nancy; that would be ridiculous. It would make for a pretty slam bang finale though, but I thought she did fine in the original with all of those traps and stuff.

Most of the reviews have made it sound like a complete piece of shit, but this makes me want to check it out. I think dipping into Freddy's child killer past is actually potentially interesting, unlike, as you mentioned, what Rob Zombie did with Halloween.

Thank you Thomas Duke. To be honest I think NOES remake got a lot of unnecessary flack. People want to hate remakes and they go into movies wanting to hate them.

I didn't love it by any means--but I will stick to my gut and say that it did do things that I appreciate in a remake--which is changing and improving on something while still sticking to the story. The characters yes weren't the best and Freddys actual crime was insanely over the line but I still say, it could have been much worse.

I'm probably going to come off as an anal-retentive purist but I still like the original better. The remake was dressed up with better effects, and with the exception of Katy Cassidy, actors that were believalbe as teenagers.. But nothing really scared me, and the characters were so poorly developed that I just didn't care about any of them. In addition to this, I picked up on a general lack of motivation on the player's parts. I've said this on other blogs, and I'll say it again here. No one in the cast really seemed to give a shit that they were in a movie. And their 'meh' attitude bled out into the rest of the film and that's what ruined it for me the most..