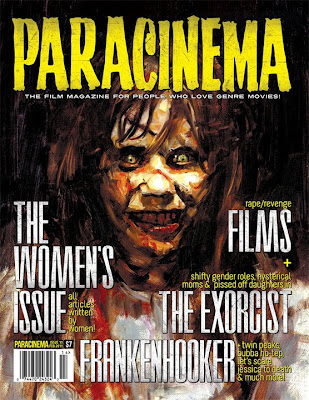 The latest issue of Paracinema is available for pre-order!
Why should you buy it? Well let's see...
1. Paracinema Is the Bees Knees
Paracinema is perhaps the best written horror and genre film magazine out there. Instead of being flooded with ads for stuff that horror fans are supposed to like, Paracinema is flooded with real, honest to good writing. GREAT writing at that. For only 7 dollars, you get a magazine that actually gives a legitimate shit about film. Isn't that nice?
2. It's the Women's Issue
Don't worry, that doesn't mean "women's" as in the entire issue will talk about periods, and how to flirt without being a slut. It means that every single article in there is written by a woman! Support Women in Horror the right way and give this issue a look see. You might find some familiar names...
3. Like Christine Hadden
Christine writes the very lovely Fascination With Fear. She LOVES Jaws which sometimes makes me nervous, but she's usually quite respectful of my fear so I let it slide. Except that one time that she posted a picture of the shark without warning...but whatevs I'm over it. Christine's article is about Fire Walk With Me. Don't you love that movie? (I've never seen it because I still need to watch Twin Peaks) Well then, get a move on and pre-order!
4. ......I Wrote Something Too!
Alright cat's out of the bag, yours truly is also a contributor to this issue. I wrote on what is probably my....third favorite horror film of all time--Let's Scare Jessica to Death and rambled on about mental illness and pretended to be smart for a change. I hope it's good, I haven't read it since I sent it in back in September...
5. Just Do it
Stop reading this and pre-order your issue. You won't regret it and supporting independent magazines is almost more important than recycling. Pretty much.
Visit Paracinema for more info.
And a huuuuge thanks to Christine Makepeace and Kristy Jett for all that you've done!
Alright time to get my period.
Just kidding!
Posted by Andre Dumas at 5:18 PM

Hell hooray yes ma'am! Of course now I have to see Let's Scare Jessica to Death before reading, and that's one of those hide-in-queue films that continues to elude me. Fiiiine. Ooh, and you also get a little Romero action from me in there! Did you know that he uses ob tampons???

Shut yo mouth really?! All these years I thought he was a tampax man!

I'm so excited you are in there. I knew you would be, you Paracinema regular you!

and YES watch Let's Scare Jessica--NOW. It's also on Youtube but don't tell anyone I told you that.

I don't think I've ever read an issue of Paracinema but now seems like as good a time as any to start.