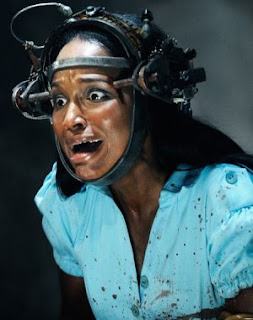 Unless you are a massive fan of the Saw series or trashy reality TV- then you are probably unfamiliar with Tanedra Howard. She happened to be a part of little show on VH1 called Scream Queens- a reality show where mostly talent-less girls vied for a spot in the upcoming Saw movie. Tanedra beat out the competition and survived weeks of cattiness- and even a little racism before she was crowned VH1's first ever Scream Queen. While the show was mostly compromised of girls with little to no acting skills whatsoever- and girls who had probably never seen an actual horror movie- Tanedra was a notable stand out from the beginning. I will be honest and say I know pretty much nothing about her- but when I came across this interview from VH1 I found my interest to increase quite a bit.
It turns out that Tanedra had very little acting training despite a few classes here and there. She also isn't really a horror fan and would much prefer acting in dramas. This made me laugh a bit because I thought of how many notable actors today had their first role in a horror movie (See Chris's post about it here on Fascination with Fear). I'm not saying Tanedra has the potential to make it big- in fact I did not see her performance in Saw VI so I'll never know- but she has been cast in Saw VII so perhaps she did something right after all. 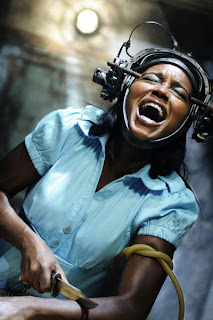 One big thing that I saw get brought up a lot in Tanedra's interview was this idea of racism amongst the girls. I find it quite strange that people are still using racism as insults in this day and age but then again this is trashy reality TV and the producers probably paid the girl in question once or twice to start something. Anyways- a very interesting question was brought up in regards to Tanedra's worry about being the only Black girl- and how stereotypically the Black characters in horror movies are the first to die. This stereotype is almost non existent now if you think about it especially when we look at movies like 28 Days Later and Night of the Living Dead. If anything years and years of horror making has taught us that there are no longer any rules. Stereotypes are constantly being thwarted and women are kicking mens butts, and sometimes men kick women's butts- it's all part of a lovely cycle. Anyways- this interview in particular makes me realize how un-horror orientated VH1 and this show really is! Half of the girls on this show only were on it- to gain reality show success- and it's kind of insulting. 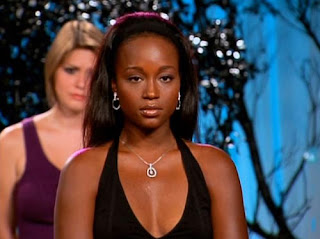 I think I keep diverging here but what I'm trying to say is- it's funny that this interviewer is insisting on Black stereotypes and what not- when Tanedra was the only Black contestant that "survived" this competition and beat out all those tramps. The show may be flawed- but Tanedra surely seemed like one of the more grounded and sensible of the bunch- and the main thing here is that she won because of her talent. She seems like a well rounded, and smart girl-but with a background in reality TV I'm not sure how far she'll get- and that's just how sad our world has become unfortunately. For the most part I think she follows the Morgan Freeman school of thought in regards to racism-
I didn’t want it to seem like I was struggling for all the black actresses. Don’t get me wrong: I love it when little African American girls write me to tell me I’m their inspiration, but I want to be an inspiration for everybody. There are a lot of people of all kinds out there who don’t have a chance. Who don’t have a resume or training, but innate ability. That’s who I want to represent.
where she doesn't really make it about race, which in hind sight is the way to go. People need to stop insisting that people are cast in something because of their race- and start realizing that acting is about talent- (or boobs... but usually talent) or the person. It may take some time- but sooner or later people will realize that we all have the same potential to be killed by an axe wielding psychopath regardless of race or sex. 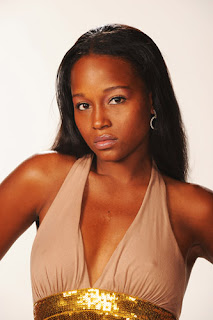 I think what people latched onto was when I said, “It’s my talent, not my color.” I had to go on the message boards to clarify that. They auditioned me and they liked me because of my talent not because, hey, let’s get her in here because we need a black.
Posted by Andre Dumas at 5:28 PM

Oh man, you gotta watch High School reunion for some trashy racial slur action! You won't believe how ignorant some people can be.

I think the crazy girl from that show said someone looked really Jewish or some shit...it could have been another show, but I think it was that one.

And I wanted the hot chick to win...cause I'm sexist!
"And by "resume", I mean VAGINA!"

Hahah what is High School Reunion??! I keep hearing about it but have never watched it- crazy.

I LOVED that episode. They must have showed her saying that line possibly 34 times. And it never got old!

It's on TV Land! It's like reality for older people, but I can't help but watch it! It's a high school reunion with a diverse group of losers coming back and reliving the past. There's this dude that was the bully in high school, and he uses the "N" word...needless to say, shit pops off from there! Show is terrible (but I love it).

I was really glad when Tanedra won "Scream Queens" because a)she was my favorite contestant and b)I felt that she was the most talented of the girls, especially considering that she had the least amount of acting experience. I was hoping that VH-1 would do another season of the show since they seem to greenlight a second season or spinoff to practically every other one of their shows. Oh well. Anyway, I still haven't seen Saw VI-I kind of gave up on the series after part III.

Scream Queens IS coming back for another season Dorian! This time with Jamie King as the host- so worry not we will get our daily dose of so trashy its good TV!

My dear friend and I looooooved Scream Queens for all its horridness, particularly crazy Jessica (and her unPC interpretation of a mentally handicapped brain that wouldn't die) and stupid Michelle (by resume, I mean VAGINA and "what's with black and white? hellooooo? haven't they ever heard of color?". Tanedra rightfully won, but she was surprisingly not so good in Saw VI.

Oh! And even if you've given up on the series, give VI a try. I think they really brought back the quality and tried to do something new.

Hahah oh man the Jessica mentally retarded thing was like....possibly the most shocked and entertained I have ever been in my life!

I stopped watching Saw after the second one- so I'd have to do some crazy catching up. I guess they have just never been my cup of tea!

Here's my Saw VI review, complete with a youtube link to the best-of crazy Jessica: http://deadlydollshouse.blogspot.com/2009/11/i-saw-saw-six-on-sunday-and-just.html

It's a hard film to recommend, per say. If you haven't seen all the Saws, there are a lot of plot points that just won't make any sense. Say what you will about the Saw series, but you can't say it's simple! Still, I think a lot of people agree VI gave it a refreshing dose of something new but at the same time, like any franchise, it gives you what you expect. If you hated 1 & 2, there's no reason to like any of the others. If on the other hand, you liked the start but fell off because of the sequels, VI might not be a bad 90 minutes.