I'm new to this whole Nazi zombie thing. Apparently it's a thing and not just a thing--there's a difference of course, but I'm not sure what it is yet. Regardless, Nazi zombies are pretty badass.
I'm not really sure what was happening with me today but I was kind of in this weird, fuzzy bubble of indifference. I watched Shock Waves on and off throughout the entire day, barely watching more than 20 minutes at a time. I realize this is not an ideal viewing pattern but the fuzzy bubble was so strong! It took a hold of me and made me do crazy things like spontaneous napping, abruptly deciding that the kitchen needed a scrub down and realizing that my pants were being bothersome. Finally, at 11:34 PM EST I finished Shock Waves and now I forget what happened. Fuzzy Bubble of Indifference 1-- Andre 0.
I don't think it's anything Shock Waves did per say, but I do think it's slightly on the disjointed side of things. There's plenty to get excited about but also plenty to not get excited about. The action proceeds like a steady stream of molasses bubbling out of a tube. There's no catalyst or anything that makes you want to stand up and dance or what have you. There are Nazis, they are elusive and show up and leave and then kill people. There's also Peter Cushing and---whoa, I just realized that I have no fucking clue what happened to Peter Cushing. Oh my god what happened to Peter Cushing?! Was I really in that big of a fuzzy bubble that I completely missed that entire part? Wow. 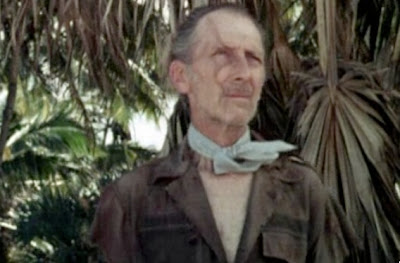 So as I saw it--some people are on a boat, then Nazi zombies wake up. The group meets Peter Cushing who is an old Nazi Commander hiding out on an island. He realizes that the group has awakened the troop of Nazis he had previously been put in charge of commanding. Zombie type soldiers created for the purpose of manning Uboats but soldiers who quickly got out of hand because obviously you can't order around zombies... So anyways the zombies come ashore and start killing people. Also they wear cool sunglasses or goggles and when you take them off and they're in the sunlight, they die. Hey Brooke Adams in this!
The best moments by far, are witnessing the Nazis rise slowly from the water one at a time. 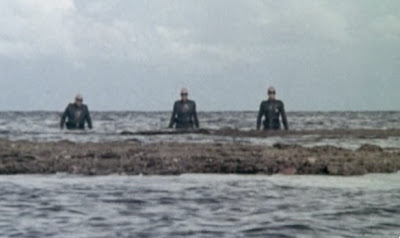 It's a surprisingly artistic sort of set up that managed to even catch my attention despite the fuzzy bubble's hold on me. The Nazis were pretty sweet and the did look quite menacing at times. I wish they killed people with a little more oomph though. They usually just dragged someone under the water and that was that. No one turned into a zombie, or became a Nazi. It was just kind of meh. Their weakness is also kind of a let down. Really? That's all it takes for me to conquer a dead-alive Nazi? 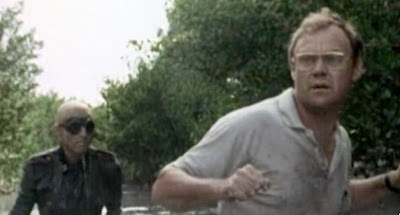 In fact, what was interesting about Shock Waves was that most of the scares came from the discovery of the dead bodies and not from the zombies themselves. 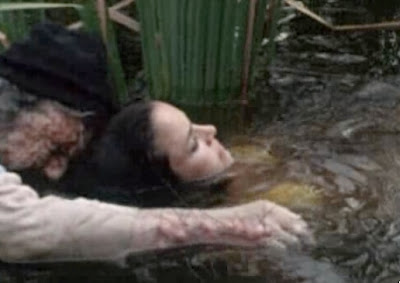 Each discovery of a corpse was actually pretty neat and somehow original. Although I will say that everyone looked oddly different as a dead body than they did as a real person. One body in particular I thought was a completely different looking person. I even had to check IMDB to make sure there wasn't some random character that I had forgotten about. But hey, maybe when you die your hair does change color, how would I know? 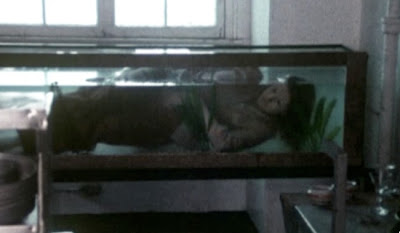 Peter Cushing was the best part, that is until I looked away for a second, or was changing my pants and then noticed he was gone. Seriously, what happened to Peter Cushing? 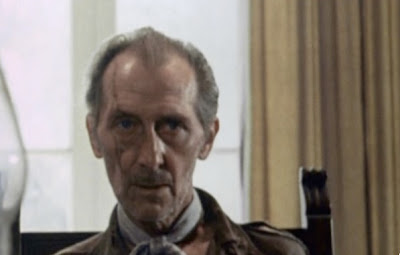 His first appearance is his lovely voice echoing over the landscape of this great empty manor. He even speaks in these weird poetic riddles, like when they asked where he was he said, "I am close but far". I love that shit. Peter Cushing rocked my socks, plus he was skinny--like Christian Bale skinny....and then he disappeared. I'm half pouting right now to show my annoyance that I have no idea what happened to him. I'm currently in the process of writing a blues song about this terrible situation.
Anyways...Shock Waves was alright but for some reason I think that if a movie doesn't hold my attention than something must be wrong with it. Am I right in thinking this? Again, there were things to get excited about. There were moments of "Oooh that's cool". But these moments mostly had to do with showing the zombies walking under the water, 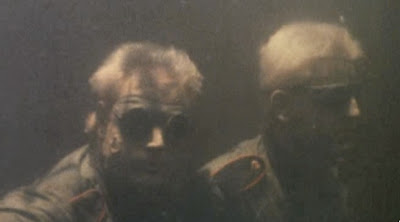 and pretty much anything involving the zombies. The people, what happened to the people---everything else was kind of a bore.
And I'm still confused about why the Nazi zombies arose in the first place but are we really surprised? I mean I did completely miss the outcome of one of the most important characters in the whole film after all. In fact, it might be better if you forget that this entire review even happened. Let's just turn away quietly.....and resume normal life mode. 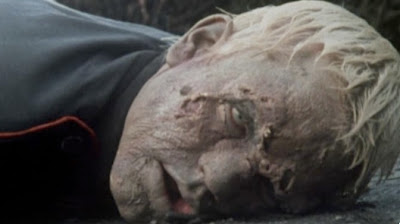 This was on my "must see" list for years, but couldn't get my hands on it. I almost wish that I hadn't, because then it would still be (in my mind) that "really sick Nazi-Zombie flick with all that cool shit in it" instead of being what it actually is...a waste of a great premise.

Hi Andre,
Yeah Zombie Nazis are cool!
Zombie lake (an Italian film)is another fantastically bad flick, with a ridiculously slow zombie vs. zombie fight (you have to see it to believe it)
I just got Dead Snow as well...
Nazis+zombies+snow.
:)
I got another good joke for you as well:
If Peter Cushing and Whoopie Goldberg had ever got married.... She'd be called Whoopie Cushing!
Ha! C'mon Y'know I got the good jokes!
Check out my Creepy Robots countdown as well if you can. But I know your busy.

I waited for some time to see this movie; and when it finally showed up on Netflix Autoplay & I watched it, I was disappointed too.

Dead Snow is pretty good. So is Outpost.

I think the best its ever gotten was two films: Dead Snow and Outpost. Thats it. So if you want to continue your exploration of this sub genre, those two are as good as it gets. In my humble opinion anyways.

I feel like you, Shockwaves has a few cool moments in it, and a couple of cool images, but its a huge ass bore.

To answer your question about why the zombies began to emerge, there is a moment when the ksy suddenly turns yellow orsomething, I guess we are supposed to believe that some sort of atmospheric abnormality caused their resurrection. But the film is really vague when it comes to explaning this.

Interesting side not: this flick was directed by the same guy who made Return of the Living Dead part II!

Great post as always! I've chosen it as one of my favorites of February, and included it in the fifth issue of Spatter Analysis.