The Puzzle: 1000 Pieces of Pure Thrill and Frustration. 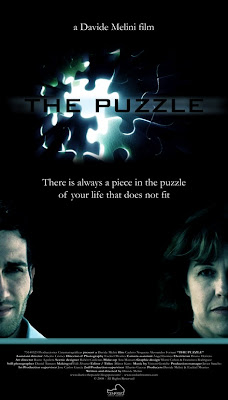 A few of my closest confidantes know that one of my greatest weaknesses is a puzzle. I went through a brief stage in college where instead of traipsing out to the local bar- I stayed at home putting together a mosaic tiled puzzle of Winnie the Pooh. Puzzles have a unique and alluring quality that seems only to attract those whose minds are capable of focusing on the task- and who would rather spend an hour finding that one damn corner piece- instead of ordering a refill on their beer- AKA me. Nerd city.
And so the main character in Davide Melini's short film The Puzzle and I are immediately linked. However, I can only hope I do not end up the same way that she did.
The film is short- at about 5:00 but with opening credits and ending credits the actual film is closer to 4:30. The mother figure we meet seems to have a very static relationship with her son who apparently calls her a lot and asks for money. This time the mother puts her foot down and shouts that it's over- she will no longer give him money. We fast forward a bit to see the mother patiently doing a puzzle that seems to be giving her a lot of trouble. Before long, things start getting creepy and when the final solution to the puzzle is solved- the mother gets the message a little too late.
What I loved most about this film is the evident struggle plaguing the mother. Puzzles are one of those things that is painful to watch and be a part of- unless you are doing the puzzle. So when we see the mother agonizing over little pieces- pacing the room, walking around the table we in turn feel agonized and restless- which immediately puts us on edge. The entire idea of the puzzle and putting a puzzle together piece by piece to come to an overall complete picture is an outstanding metaphor for this little film. Things do not start making sense until the puzzle is completed and we see the solution. The solution in this case is perhaps a solution to the son's problems but only an even bigger puzzle to the audience who really has no idea what just happened. This isn't a bad thing however because the movie in turn becomes a sort a puzzle for the audience. We must carefully go back and put the pieces together to come to our own solution.
The film is very intriguing in other areas as well, the sound effects, how Melini builds up instant tension with the phone ringing and a confrontation- and some pretty impressive camera angles and shots. I especially loved the shot of the stove burner-which I was convinced was a jump rope for a good 5 seconds, and the always shadow of the candle on the face look.
Although the film is short, it definitely makes me interested to see what else Melini can come up with. If he is capable of making my head hurt in 4 minutes and 30 seconds I shudder to think what he could do with an hour and 30 minutes. I mean that in the best possible way. It's clear from this film that Melini will be making the type of horror movie I can really sink my teeth into. I mean of course the intelligent kind, the kind that make you think for hours on end and most importantly, the kind that affect you long after watching.
While the solution to the movie's overall message is difficult and challenging to figure out- what fun would a puzzle really be if it only had 10 pieces. Know what I mean? Melini brings complexity and possibilties to a world of horror that could really use his help.
For your viewing pleasure, you may watch Davide Melini's short film right here on this very blog. Feel free to share your own solution- and please spread the word about Melini and his extremely intriguing film- which certainly warrants more than one watch.
Posted by Andre Dumas at 9:27 PM

Thank you, Andre, for your beautiful words and I hope you will enjoy, in the future, my new short too! Horror movies cannot die!!!

Cool! I'll be checking this out when I get home from work later.

It was clever and interesting. I posted it up on the jaded viewer too.

We all should support the international indie scene too!

Ooh I know I read your review and others before I wrote mine, to gain inspiration for what I wanted to say!

I watched this over the weekend. Very nice atmosphere. I loved the lighting and mood.

wow!!!!! its just like watching a movie﻿ at a cinema. melini got a good talent in making movies! i loved the﻿ camera work and editing