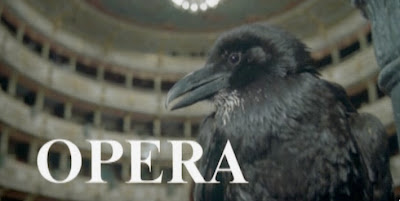 The other day I voiced out loud that I wanted to go to the opera. My co-workers gave me an odd look, like I was crazy. Who on earth would want to listen to people screeching in Italian after all? Well, it just so happens that my favorite episode of Seinfeld is The Opera. Also, I like singing and I like when people sing in different languages. Plus, haven't you always wanted to get a pair of opera glasses? What's not to love? Something evidently, as announcing to your drinking buddies that you want to go to the opera is something you shouldn't do.
Nevertheless, I will continue to praise the opera because I do happen to find it beautiful. Since no one will go with me however, I'll have to settle for Dario Argento's Opera, a film that I wasn't crazy about my first time around. In fact, it doesn't even make my top 5 Argento list (Suspiria, Four Flies, Deep Red, Phenomena, Inferno). But my recent love exclamations for the waning art has me reconsidering my assessment. Perhaps I made a grave error in judgement. Or maybe the raven was over the top. Let's find out shall we? 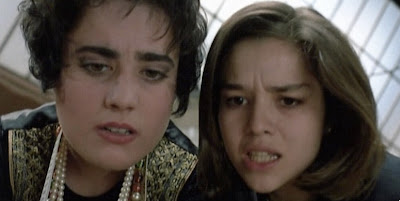 The good news is, I like Opera much better on this second viewing. The first time I was distracted by the inappropriate usage of heavy metal music as well as the constant hook and reel routine going on. It all seemed a bit too formulaic after a while and I think that really got to me. As is usually the case when you watch something a second time however, you start to notice different things. Now that I had already known the story going in, I was free to concentrate on just what exactly Argento was going for by making this film. It may not be as beautiful as Suspiria or as gloriously minimal as Four Flies on Grey Velvet, but Opera does end up being a fine marker of Argento's power as a filmmaker. He thinks about everything and I didn't realize it immediately with this film but golly--is it smart.
After I watched Black Swan, I couldn't help but be move by how wonderfully Aronofsky used the black swan ballet as both a story and backdrop for his film. The same thing kind of applies here in Opera except in a bit of a different way. Opera is also a story within a story but on two different levels. On the one hand the film can represent an opera. The music used, the costumes on our main characters have an extra oomph--and most of all we are watching it. It all goes back to that idea of movie goers being voyeurs and who is more of a voyeur than an opera goer peering through their opera glasses? This concept of voyeurism is heavily laid on in Opera. Our killer forces Betty to watch him kill her friends.

Betty's neighbor watches her from the grate. The birds watch from their cage. And how is the killer punished near the film's end? By having his eye ripped out of course.
Secondly, I love how the director of the Opera comes to kind of stand for Argento himself. In one of the reviews he reads of his opera the line, "Go back to horror films, forget opera!" is uttered. If that doesn't send the message--I don't know what will. The director in Opera is all about the spectacle. He takes a proper opera, and brings his horror influence, his crazy costumes, his live ravens and turns it into a live movie.

Dario Argento on the flip side of that is taking a proper opera and giving it the horror film treatment, but still putting all his special touches on it. This is why I think the heavy metal music does end up working. It's still music isn't it? And while it's not what I would love to hear during a violent murder scene--it certainly tends to make everything more theatrical. Most importantly however it fits with that whole off feeling that is felt. The director in the film spins conventions and as we all know, so does Argento.
There's also too this idea of Betty kind of being a Macbeth character. She is overpowered by a Lady Macbeth (the killer) who forces her to watch and be a part of a murder that she may not have wanted to be a part of at all. Betty's own sexual failures mirror that of Macbeth's when Lady Macbeth challenges his manhood in order to coax him to do the evil deed. Granted Betty isn't killing anyone--or wishing death upon people, but the similarities there are rather interesting to think about.

Yes, Opera got me thinking all sorts of interesting things but it didn't win me over entirely. There's still something about it that doesn't quite jive with me. The kills aren't as creative, they aren't orchestrated as seamlessly as some have been in the past. There's also a few dodgy parts revolving around the flashbacks and who the hell those people are--as well as the main motive for our killer. The reasoning behind his mad man spree seems rather stupid, if I may say so. The ending is also oddly rushed, anti-climatic and jarring. And of course there is the one with the environment speech at the end which again, makes little sense to me right now.
For now, Opera has perhaps made it to #6 on my list. I like it much better but there's still something preventing a full out love fest. Maybe when I finally get to go to the opera--I'll have yet another change of heart.
Posted by Andre Dumas at 6:31 PM

This and THE STENDHAL SYNDROME are the last great movies Argento has made.

Everything else since has been pure shite.

I definitely agree with your sentiments regarding OPERA. It is entertaining, and is a smart and interesting movie at times, but it has some odd moments- the environmental speech in particular, and it's not in my top Argento movies either- I also prefer Suspiria, Phenomena, and Deep Red, and also Inferno, which I just watched the other day. I did enjoy this more than Tenebrae though, so It's not my least favorite. I still have to see Four Flies on Gray Velvet, in fact I think I'll bump it up on my Netflix queue ASAP!

you are so not crazy to want to see an opera! you know i took kim kettler to see mozart's "the marriage of figaro" last year at the opera house. it was awesome.

so if you ever need a partner in crime, i'm so down. la boheme, carmen... or any of those other operas. maybe they have a sweet student rush tickets deal like the boston ballet does?

What? I would see the opera.