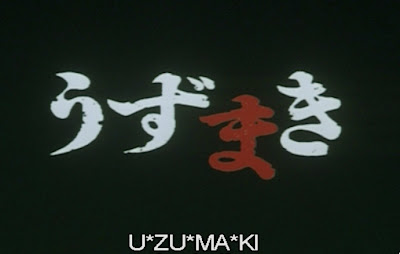 Lately I've taken a big interest in expanding my mind. Everyday I read one large article on something that I wish I knew more about and then I regurgitate what I learned happily back to my sister. It reminds me of when I was little and we used to play, "Now, what did you learn today?" at the dinner table. Back when you actually learned stuff everyday. Now of course the game is, "How did you waste your day today?" and then everyone cries and drinks and pretends that life doesn't completely stink. So far, I've extensively researched the Plague, cats and Will Keith Kellogg and the creation of the Kellogg brand cereal company (which is surprisingly interesting and I recommend you do check that one out).
Today after watching Uzumaki I heavily researched the nautilus, spirals, the Fibonacci sequence and an episode of a little show called So Weird. Who said I was bad at math? Well, they were right but lucky for you and me, really understanding the math doesn't really matter. What matters is that Uzumaki is all about spirals which makes sense since its English name is Spiral. Uzumaki is also very strange and doesn't really explain anything at all--but we'll get to that in a bit. For now just concentrate on spirals. 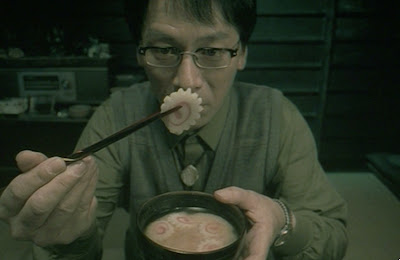 Uzumaki is a Japanese film that follows a town that gradually becomes overcome by evil spirals. We're not really sure who these evil spirals are, or where they came from or anything really. All we know is that the spirals are taking over. People are being turned into human snails, 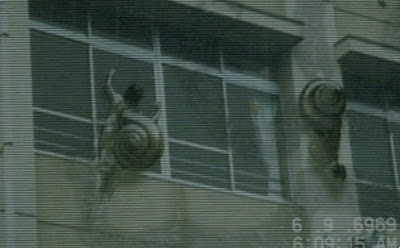 a girl's hair becomes a tower of spirals 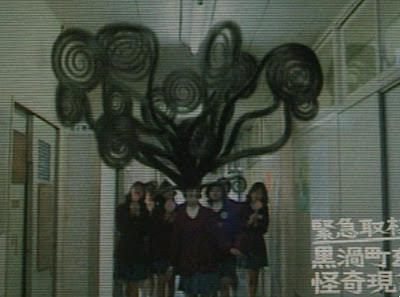 and people's bodies twist up in grotesque manners. 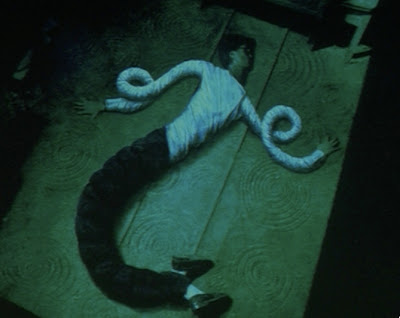 People are dying and it's the spirals fault.
I kept having a blonde moment (I'm a brunette) and double checked the Netflix sleeve consistently checking for the year Uzumaki was made. After I saw that yes it did come out in 2000 and not sometime in the 80s, I was dubious. I double checked on both IMDB and Wikipedia because really, can we trust Netflix anymore? As it turns out you can (most of the time) and Uzumaki was in fact made in 2000. I was confused because the very beginning of the film feels very old school Japanese cinema. Almost like Hausu even though that was in the 70s. Looking back maybe it's just the fact that Japanese teenagers just really do and say silly things. Also, they get easily excited about melons. 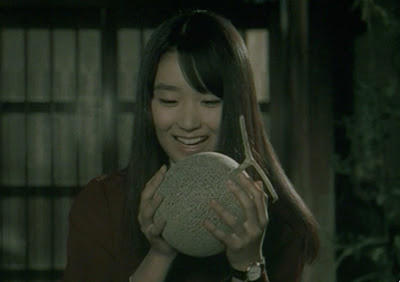 Is that racist?
So anyways, once I got that whole mess straightened out, I came to enjoy most of Uzumaki. I had anticipated more neatness going on but what can you do? The film starts kind of odd but nothing is ever really, "weird". Things don't really start getting weird until about halfway through which, is actually the point of no return really. From that point on shit gets really, really weird. Like fat Japanese kid dripping with slime and suicide by washing machine weird. It was sort of surprising now that I think about, because for a while there I didn't think Uzumaki was ever going to reach that point. But oh, it did. 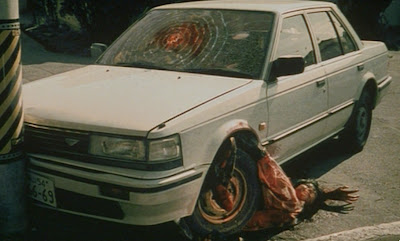 The best part about Uzumaki at least for me, was the presence of the spirals. 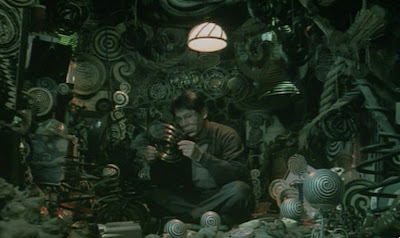 There are so many and you really don't expect it. Actually, I had heard that the spirals were plentiful, but because it takes kind of a while for that to happen you start to forget. Then suddenly you look up, and the spirals have overcome just about everything on the screen and it IS startling. Sure there isn't a whole lot of scaring going on--but all the spiral imagery is good enough to withstand the lack of it. 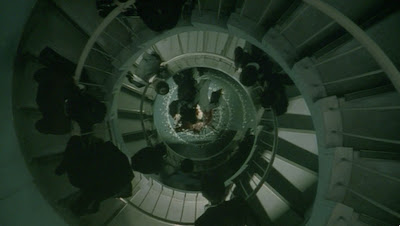 After doing a bit of thinking however--I guess the main driving force is the presence of the spirals. A few of the deaths look pretty neat, and there are a few moments of gross, but it's not really what Uzumaki is really about. So is it really just all about the spirals?
It would seem so seeing as how it's kind of hard to extract a deeper meaning from this film. Yes I'm sure it probably has one but because there isn't a whole lot of explaining going on, it sort of makes it hard for us to ever really figure anything out. They sort of dip into the presence of some cult and there are a few instances of a religious tie in--but those theories aren't fleshed out at all. People that know anything about the manga will have some answers I presume, but the movie is not a manga. You cannot and I repeat, you cannot justify important plot elements because you read the book. If it isn't explained or hinted at in the movie than it didn't happen--period. This is perhaps my main gripe about Uzumaki. I just wanted answers. The imagery is cool yes, but can the entire movie rest on the shoulders of the spirals? Hard to say. Personally, I think it needed a little something else. Mostly Uzumaki does feel like it's all about the look and the style rather than the content.
There are shining moments however. The part where Shuichi's mother realizes her fingertips contain spirals and cuts them off for instance, was entirely cringe inducing. For some reason thinking about someone doing this or worse me doing it to myself is really unsettling. 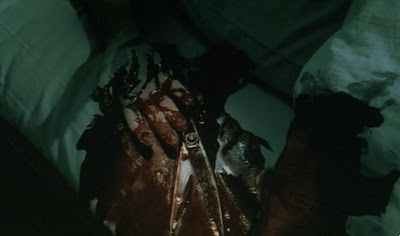 It reminds me of the opening credits of Se7en and the revelation that John Doe doesn't ever leave fingerprints because he cuts his off. I mean yikes! And this lady does it with a pair of scissors!! Actually, Shuichi's Mom had a whole slew of gross going on. Like, the millipede crawling inside her ear, 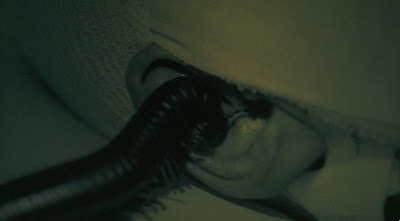 which incidentally reminded me of Brokedown Palace and again made me cringe. Things and especially large things, going into ears is horrifying. Please god let me never have to watch a scene like that again...
Then there is the really, really strange occurrence of people's tongues acting all gross and spirally. 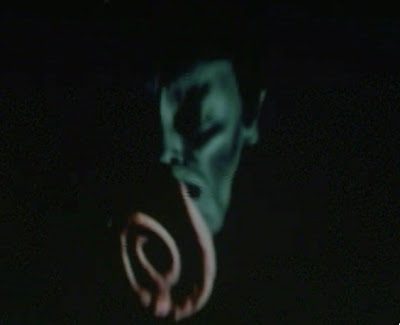 Hopefully I'm not the only person to make the connection that somebody had a Cootie tongue. Cootie by the way is a horrible game to play when you're older. 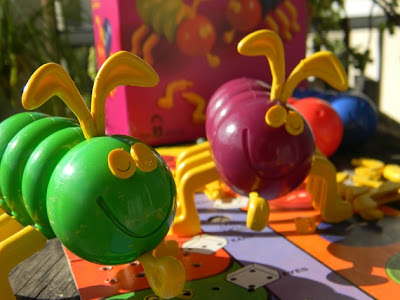 It's tedious and really not fun at all. I'm pretty sure the 5 year old I played it with hated it too.
Anyways, these moments and the rest of the spirals were fantastic. I did wish the film did a little more showing though. The washing machine scene especially had me filled with annoyance. Why can't we just see what it looks like? And what did exactly happen by the way? Hmmmph!
After doing all my research, I have decided that spirals are pretty neat. 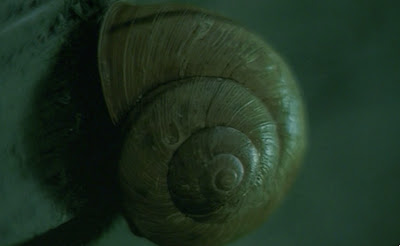 They are one of many naturally occurring instances of the Fibonacci sequence and in the episode entitled "Strange Geometry" in So Weird, an architect used the Fibonacci sequence and the design of a nautilus to create a portal to another dimension. A dimension that trapped souls within it. Now, I've never been one to draw parallels between Disney shows and horror movies (Just kidding I do that all the time) but the possibility of this Japanese town actually being a portal that traps souls is entirely interesting. This would explain a lot really and since Uzumaki did not explain anything that happened I will just have to believe that that is exactly what happened.
Overall, Uzumaki is an artistically lovely film, bathed in a green filter and overflowing with fantastic imagery. I still maintain that the story needs a lot of work and that there is actual meat missing from the overall picture. Still, worth a watch at least to get a taste of the completely weird and mystical world of spiral city. Just remember to blink now and again.
Posted by Andre Dumas at 9:53 PM

I always found the production design of this film to be outstanding. That and all the different and creative types of spirals that could be found. My favorite: the spiral that's in your ear.

I had a very had time understanding this movie, nevertheless I absolutely adore it. One of the weirdest but also most fascinating movies from Japan.
Great review!

Definitely a case of style over substance, but the style is SO neat that I love it. Plus, that IS a goooooooooood melon!

This plays neatly into the sphere of pure lovecraftian horror. There is a hidden truth to the spiral that we the audience do not understand. If we DID understand it we would be like the unfortunate and twisted souls in the movie. Like a black hole we can only observe what it swallows.

I've yet to see this movie but I'm a HUGE fan of the book. It truly is one of my absolute favorite reads, especially horror. The book truly creeped me out and actually had me jump a few times turning the pages, I was so engrossed in it.

You can read my review here...


But yeah, I really need to get up on the movie, asap!