BUFF and Lucky McKee's The Woman 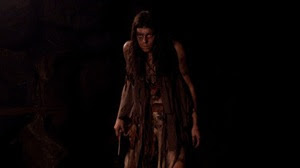 Last night I finally got to attend a night at the Boston Underground Film Fest. An amazing film festival that actually gives Boston a chance to see some truly amazing films before...other people. There was a great energy there filled with people that actually want to see film and that appreciate it--and I dig that.
The first film I got to attend and the one I was looking forward most to seeing was Lucky McKee's The Woman. I was a big fan of both May and Roman and after learning about The Woman and the controversy that happened at the Sundance Film Festival, I could not wait to see Lucky's latest endeavor.
The film was completely outrageous and probably one of the most disturbing and terrifying experiences of my life. I came pretty darn close to having an anxiety attack and also vomiting all over myself (although drinking beer before the movie was probably the cause of that). I cannot even explain to you how crazy The Woman is. I could not stop thinking about last night and I'm still having trouble functioning today without recalling moments from the film. Call me crazy, but that is the ultimate definition of a truly disturbing film.
So for all those interested--read my review at Fangirltastic and please for the love of god, see this film if you get the chance. I will talk about it more on this blog as we get closer to the end of Exploration Disturbia but all you need to know right now is---holy shit.
Posted by Andre Dumas at 3:55 PM