A Bum For All Seasons: Remembering George "Buck" Flower

Yesterday while watching Escape From New York, I was surprised to see a familiar face starring back at me. Right smack dab in the middle of the nauseatingly dirty basement of the theater, was a suspicious bum pretending to be the president. 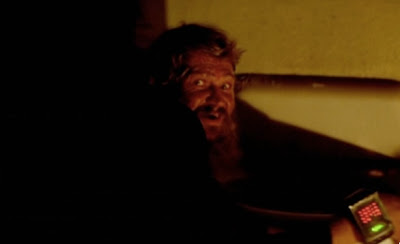 This wasn't just an ordinary suspicious bum however, this was the bum from Back to the Future.

Yes, Red the Bum always popular for napping in the heart of Hill Valley California, was also a bum in Escape From New York. This got me thinking, just who was this bum and what did he want with me?
A little research had me gasping for air in no time. Apparently George "Buck" Flower was quite the prolific bum. After scanning the list and seeing the words, "bum", "homeless man" and "drunk" appear about 40 times, it became very clear that Old Buck had played a homeless man in just about every movie that I have ever seen that involved a homeless man. The magic just kept happening---"he was in WHAT?!" How did I miss THAT?!" Unbeknownst to myself, Buck was a regular in the horror genre, filling roles that I could barely remember. And bonus--he was also a regular in the soft core porn genre, populating such roles as Manheim Jarkoff and Walter Wimpy. 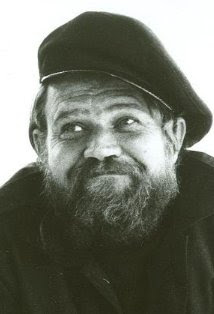 Also a writer, producer, assistant director, production manager and casting director--Buck Flower remained a special part of the horror genre by having reoccurring cameos in most all of John Carpenter's films. The Drifter in They Live, Carlton in Village of the Damned and Tommy Wallace in The Fog to name a few. His long list of roles however goes even further beyond that with such roles as Mr. Wallace in Pumpkinhead, Pop in Cheerleader Camp and Sarah's stepfather in Waxwork II. I mean honestly---how did I miss this?
Unfortunately Buck died in 2004 of cancer--but that doesn't mean his memory won't continue to live on. I for one will be doing my part by fist pumping every time I spot a Buck Flower cameo. What will you do? 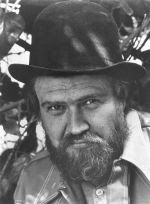 Incidentally, Buck was not the only bum to catch my eye in Escape From New York. The second most famous bum in the world, Hobo Jack from Pee Wee's Big Adventure 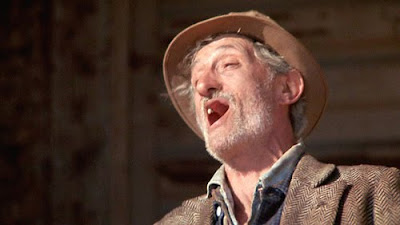 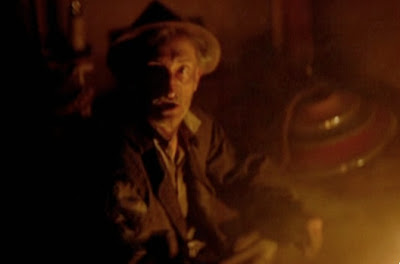 This however was not as surprising as realizing that Hobo Jack was also Old Man Withers from Wayne's World, the flattened messenger in Beetlejuice and the old man in the bar in The Wedding Singer. Gosh, how do I miss these things?
Posted by Andre Dumas at 6:52 PM

It's been too long since I busted out the Snake. I can remember that movie coming out right before I started high school (gotta stop dating myself like that) and even though Kurt Russell had done the Elvis TV movie a year or two earlier, I still remember thinking "Damn...I can't believe this is the same guy from 'The Computer Wore Tennis Shoes'!"

And Carmen Filpi also rules. His bit in Halloween 4 might be my favorite part of the Halloween sequels. And yes, Wayne's World. Soo awesome.

I was watching "Camp Fear" the other day, and who should appear? Buck Flowers. What a bum!

Anyway, wanted to inform you that I included a link to this post in the latest "issue" of SPATTER ANALYSIS.