Pulse: The Other Shower Scene. 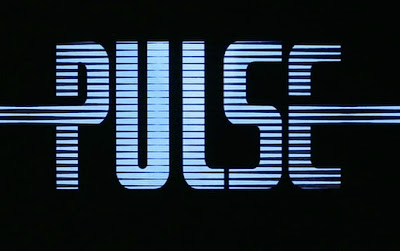 Although I wouldn't call myself a horror nerd since birth, there has been the occasional instance of stumbling upon a random horror movie and getting scarred by a certain scene of kid friendly terror. I was probably in 2nd grade when I stumbled upon the 1988 movie Pulse at my friend's house. I remember very little about the movie as a whole--something about a kid being choked by carbon monoxide in the garage and some blue sparks from a toaster maybe. But I can recall one scene particularly well; a woman takes a shower, when the water turns extremely hot, sealing the glass door and preventing the woman from being let out. Someone smashes the door with a lamp and she crumbles to the floor, massive burn blisters litter her back. Traumatizing.
So while mindlessly choosing films to move to the top of my queue, I decided that it may finally be time to visit the flick once more. Imagine my surprise then, when I press play and find JOEY LAWRENCE as the lead kid! 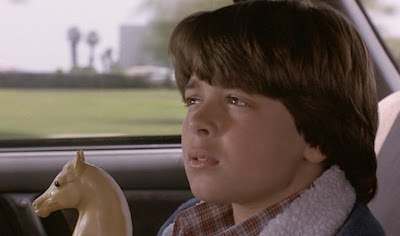 Clearly, Christmas had come early. Not to mention little Stevie is played by MATT LAWRENCE! 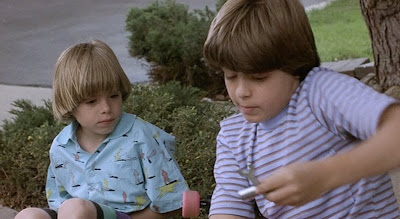 Remember when the Lawrence boys were like the dream team? 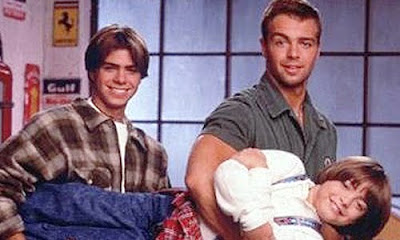 Me neither. But I vaguely remember them having a fan base when they did those Disney Original movies.....
So anyway, a few minutes into Pulse and I felt my memory slowly coming back to me. The film opens with a couple being awoken by the sound of smashing next door. It sounds like the neighbor is killing someone. Before long the neighborhood amasses outside listening to the neighbor yell and curse at something before his voice is lost amongst a sea of sparks. When the police go to investigate, they find the man killed with an electrical wire jutting into his head. Joey Lawrence soon moves into his father's house and after a night of devious behavior involving adding one too many spoonfuls of Nestle Quik into his milk, 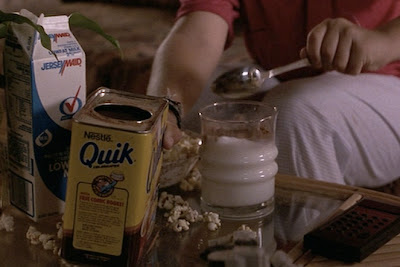 the TV goes haywire and the sparks start acting funny. It is not long before the electricity of the house starts to act out in violent ways, resulting in some really disgruntled appliances.
I wasn't too hopeful that Pulse would elicit any kind of fear within me. But who am I kidding? Appliances have always freaked me out a little bit. For instance, in thunder and lightning storms, didn't our parents always tell us to unplug everything?? Now grown up of course we realize this was just a hoax because I keep my stuff plugged in and nothing happens....but I digress. There was still always the fear of some kind of electrical explosion. There's all these rules with appliances; don't put tin foil in the microwave, don't stick metal in the toaster, don't lick wall sockets. Tons of stuff that causes catastrophes! So then it is a little scary when those appliances have the power to explode and do deviant things without being provoked. Herein lies the fear within Pulse. The only problem is, that it doesn't really work.
I think its biggest problem is that the pacing is a bit off. Nothing really happens other than a few blue sparks. 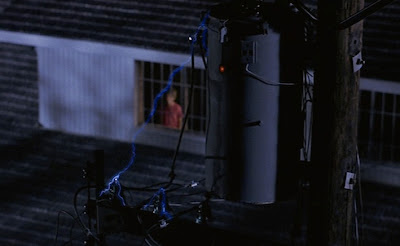 The two biggest incidences come much closer to the end and are punctuated by an immediate push to get out of the house. The only reason the final showdown happens is because the Dad randomly decides to wander back in the house. If the appliances had started not only acting a bit funny, but doing strange things that everyone noticed--maybe the tension could have been built up a bit better. We need something to spark a note of interest in the adults. Something that makes them question the house other than taking the little kid's word for it. After all, the father doesn't believe anything is amiss until the Stepmother gets trapped in the shower. The Stepmother however did believe the kid but only because she's more sympathetic. Basically, I just want more action. The film can't even be classified as a "slow-burn" because it's not, it's just boring.
There are redeeming factors of course, mostly having to do with Joey Lawrence; his race car bed,

little Matt Lawrence's blooper of glancing at the camera 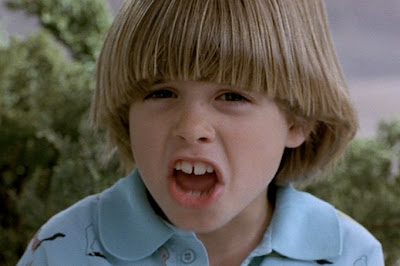 (what an amateur!), that kooky old man, Joey's attempts at skateboarding. It's all very fun. But the movie as a whole just doesn't deliver. The shower scene however---is, I think a point of redemption though. 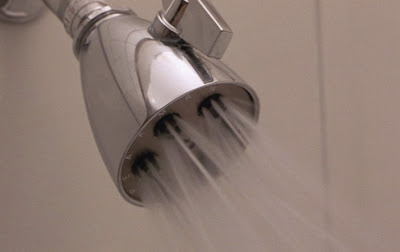 It must say something if after I saw this film--my entry into a glass shower was always met with an unusual fear. The thing with glass showers is that it improves upon the concept of seeing your murderer coming at you a la Psycho. But the fact that the glass door can seal itself shut is like a punch in the gut. Glass showers are supposed to luxurious! They can't become instant death traps! And the way that the water is so steamy and the yells of pain from Roxanne Hart, 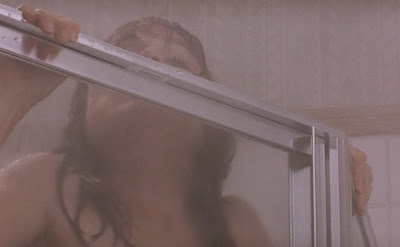 it almost causes you to grimace. Or in some cases clutch your really badly sunburned legs and yell. A quite effective scene in my opinion.
Sure overall the movie is a miss. But there's still the little fact of how capable electricity as a villain can be. It does after all, have the power to easily transport from one place to another. And since we're in an accepting environment right now I suppose I can relate to you something I always found creepy.... those electrical transmission towers. 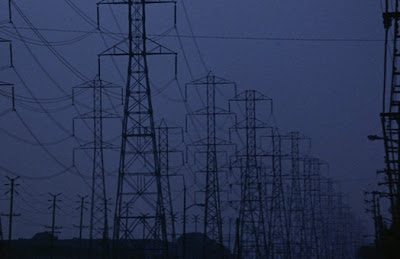 They look like people sometimes okay?! Sure the film may just be a commentary on how we all have to become Amish people and live without electricity. But at least it allowed us to see two Lawrence brothers act in the same movie. That always brings a certain warmth to my heart at least.
Posted by Andre Dumas at 1:17 PM

Great review. I also saw this one as a kid and that shower scene is the only part I remember. It kinda freaked me out a bit. I've been wanting to check it out again ever since, but now that I read your review, I think I'll definitely pass, lol.

Wait...isn't this movie about electrical crap? How did it get control over the shower???

The electricity short circuited the furnace or something? Haha yeah it's a true test of its greatness apparently..

Holllllly crap. I was just thinking about writing into Kindertrauma to see what this movie was. You have made my night.

Haha that's awesome! Now you can write it in as a traumafession.

I feel like I may have seen this one when I was younger...the plot seems vaguely Maximum Overdrive-ish (the whole appliances coming to life aspect). Also, I wonder if there was a clause in Joey Lawrence's contract stating that either Matt or Andy (or both) was required to play his brother(s) in any given tv show/movie that he appeared in :)
Oh, and on a side note, I just remembered that I recently saw a commercial for Scream Queens 2 on VH-1, and it starts airing in August! I can't wait!

I wouldn't be surprised Dorian, although Matthew plays the neighbor kid, Stevie. But yes they seem to always be together. I watched a few episodes of the first scream queens and it was such a train wreck. But in a good way of course!

Just recently I've been trying to remember the name of the film that shower scene was from, so thanks! Will have to give Pulse another watch, safe in the knowledge that I don't have a power shower.

Ha! I love how you focused on the shower scene. When I tweeted that comment it was because that is the scene that always stuck with me as well. Fortunately we had a shower curtain at the time! Why, it darn near almost qualifies as a willy inducer... Really am gonna need a second installment of that!

Even as a kid I thought something wonky about the shower being affected by an electrical boogeyman yet here we are talking about the impact of the scene, having nothing to do with the glaring logic faux pas. For me, part of it was the fact that Roxanne Hart was the only one who didn't annoy me in some way, and well, she was the mom... Ya just don't do stuff to Moms!

I half remember watching a Saturday tv movie when I was sick with the flu about appliances that went crazy and started killing people. I remember a scene with a draw bridge that freaks out and the death toll piles up. Is this the same movie?

No draw bridges in this one French Waffle! Not sure what that is....hmmm

I saw this one when I was a kid, and that shower scene definitely left an impression!

This and the coffee pot electrocution scene in The Believers with Martin Sheen - two good reasons to go Amish as far as I'm concerned!