Digest Quickies: Myst Creeps Me Out and This Is Why. 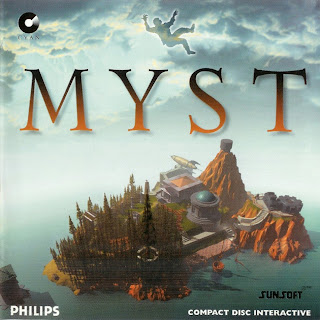 Last night I had a dream that I was walking through the worlds of Myst. Remember Myst? It remains to this day the only time I've been legitimately creeped out while playing a computer game. Granted up until that point the only real games I had played on the computer were Neopets and "Where in The World is Carmen San Diego?", but still, one cannot deny the sheer quiet kind of creepiness that pours out from your screen when attempting to play Myst. It was something about how no one else was around, and how each sound of a wave or even the apparent wind rushing past your ear sent shivers down your spine despite the very problem that still---no one was there. Loud noises that YOU were the cause of, made you jump a mile simply because of the surrounding quiet. It made you feel like the great ruckus you caused would send those sleeping monsters (or whatever presence you felt) straight into your face. And yet--nothing ever came. 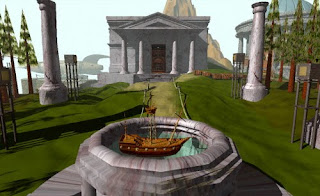 Then there was that particular moment, when you opened those books and those two brothers would just be in the books. The shock of seeing someone else, even if they were just in a book and not in the flesh was the cherry on top of a double cream pie of creepiness. Each time you were transported to a different age, you were still met with the unfortunate circumstance of still being alone. 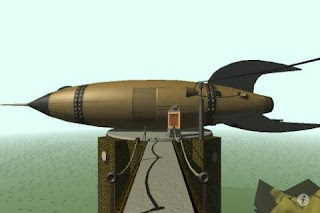 The sad fact is--my sisters and I only made it to the spaceship and could go no further. We struggled for days trying to figure out how to light a damn match, and then spun some wheel and before long we were standing in front of a spaceship and were thrilled at the thought that we may have actually done something. Unfortunately a keyboard was starring at us in the face and for one reason or another we gave up, We blame this sad fact on the notion that none of us knew how to play the piano or remembered which notes were which but perhaps it was because we were too scared to go on. Actually I change my mind. Myst is impossible and anyone who beats it without cheating is A. lying that they didn't cheat or B. a computer.

I'll have you know that the only two Myst games I've played are the first and the last. The latter I beat (because I cheated) and was equally terrified of, even though at times there were other things that you met (like scary wall crawlers). Overall the game was still like its predecessor, characterized by its quietness. Quiet in a computer game is the very ingredient needed for suspense. It's suspenseful because you feel like someone or something should be there. Repeated indications that yes, you are alone only make this fact stronger. Something just doesn't feel right. Extravagant landscapes and ancient looking abandoned villages are enough to give anyone the willies and that feeling of wrongness, and of intrusion is never more apparent than it is when you play Myst. It has the strange ability to assure the player that they are alone, while at the same time causing them to continually look over their shoulder.

Myst, I thank you for those creepy moments. And I just wanted to say, that I miss you.

Myst always was a great game. god, i hadn't thought of Myst in years, but it was very cool. I remember i even had a booklet to help me get through it. it came with some Myst game pack and i still couldn't finish the first one.
if you really want to up the creep factor in a game, check out clive barker's 'undying' you may or may not thank me later :)

Loved Myst - really the precursor to Lost. You nailed it - it was all about the silence, the not-doing (as Carlos Castaneda might say)that created the creepy sense that you were absolutely alone... are were you?

Myst is one of those series that I always wanted to check out but never really got around to play. I'm not a big fan of adventure games, but even I know that this one is worth the shot. I still hope that one day I'll be able to make the time to play it.

I remember playing this game & it used to creep me the fuck out as well.

Riven: the sequel to Myst is also very creepy, there were many gameplay elements that made you felt like you were being watched. There are hidden faces, and clues that you're not the only one walking around the world.