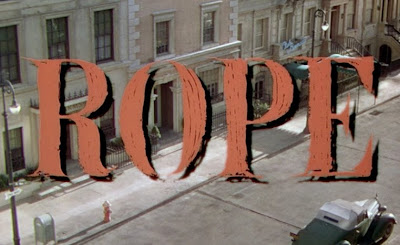 After the first time I had seen Psycho, I was invigorated with the purpose to watch every Hitchcock movie possible. In 2nd grade at the time, I began using my library card to rent every 10 pound Hitchcock VHS that they had. I was making great headway, having watched almost every one the library had to offer--but I couldn't help but notice that one of his films that I had looked very forward to seeing was absent. That Christmas after the initial Psycho viewing, my parents bought me a Hitchcock book--detailing every one of his movies, reviewing, and talking about its finer points and so on. The one that I became the most interested in was Rope. In its passage the author talked in great detail and apparent excitement about the fact that the film was shot in one continuous shot. The possibility of this statement boggled my mind. How could anyone shoot an entire movie in one shot?! I then made it one of my life goals to see Rope and find out what all the fuss was about.
I'm not sure why it has taken me so long to accomplish this, but perhaps it was a blessing in disguise. Had I seen this when I was in 2nd grade I would have watched and misinterpreted the movie the same way I had misinterpreted the books passage. The film is not one continuous shot rather, it is only made to look that way. It's a curious effect as it causes the film to appear to be in real time. It also tends to make things a lot more claustrophobic and practically causes us to shoot back the booze just like our friend Phil over there.
The entire film takes place in the apartment of Brandon and Phillip who have just murdered their former classmate David. 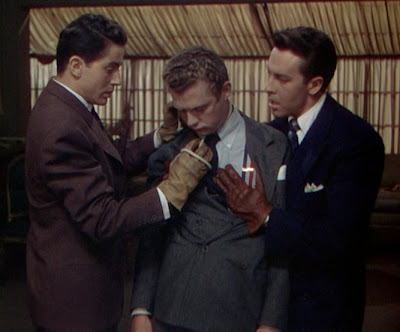 After strangling him with a rope, they stuff him into the chest that resides in the center of the sitting room. The motive behind it is to prove that they can really pull off the perfect murder. Brandon, who is more pleased than punch at what he has accomplished begins getting all these crazy thoughts. You see, the boys are about to have a party in the very apartment that they have just murdered someone. Brandon than believes that instead of serving the food on the dining table, they will instead serve the food on the chest that the dead David is inside of. And wait till you hear who is coming to this party. David's parents, his finance! Yes, it's all a little crazy hmm? Oh and Jimmy Stewart is their former prep-school headmaster who inspired this murder to take place. In school he used to speak about the art of murder and the intellectual concepts behind it. By committing the perfect murder one therefore gains a superiority over others. Apparently.
As you may assume, there isn't much that happens. Guests come and Brandon stirs things up. Phil grows increasingly more anxious and takes a liking to the vast supply of alcohol. The question of the night remains, "Where is David?" and Brandon gets more and more excited the closer people to get to worrying while Phil just gets drunker. There is one particularly brief moment of anxiety as the chest almost gets opened, but its flame is quickly distinguished. All goes well until Jimmy Stewart's character returns to the apartment looking for his cigarette case. It is now that the final showdown happens--but can you really call it that? If Rope was a heart monitor I would imagine its line would be a steady beat, briefly jutting up when a gun is wrestled from Phil's hand and then back to normalcy. This isn't necessarily a bad thing, although many would argue that the appeal of Rope lies solely in the illusion of the continuous shot.
I wouldn't say I completely agree but I do find it to be one of the less suspense inducing films of Hitchcock's. This is strange considering that unbeknownst to everyone except two people, there is a dead body in the room. I did enjoy seeing Phil battle with his conscience and watching his degradation happen. He quite obviously was not into this idea from the start, yet his strange loyalty to Brandon prevents him from ever backing down. Perhaps it's really all about the characters, or the subtext of Nietzsche and what is really meant by gaining superiority over others. I'm not sure it really is though. I still feel like the film is mostly about the one shot. I read somewhere that a critic once complained that he wished Hitchcock would have chosen a more interesting subject to use this new age technique on--and perhaps I agree. Rope will not be one of my favorites I don't think, but thank goodness I've finally watched it so that my life can go on.
This trailer is very interesting as that whole park scene was filmed solely for the trailer and is not in the film.
Posted by Andre Dumas at 8:49 PM

Between you renting Hitchcock flicks in the 2nd grade, and BJ-C renting Vincent Price movies at age 7... I definitely aspire to have my daughter be as awesome as the two of you :-)

Presumably, this film was inspired by the Leopold and Loeb case, where two friends decided to kill a kid just to see if they could get away with it. They didn't.

I've always had a thing for Rope - since my early teen years, at least. But I think it had more to do with the whole Leopold and Loeb allusion cause I didn't find out until much later in life about the "one shot" technique - which is pretty cool. I think the psychological tension is what I like about it too. Plus I love Farley Granger!

This has always been one I've loved because of the gimmick, along with Stewart's ridiculously great rant in the final minutes. Definitely agree that it's not a fave Hitch, though.

Also, in regard to the continuous shot illusion, it's a lot of fun to look for the cuts when the camera randomly zooms in on someone's back or the lid of the chest/coffin. Good stuff.

I'm with Brian on this one, it's so cool that you were down with Hitchcock at such a young age. I have always heard really good things about Rope and have also been wanting to see it badly. Glad you put my expectations in line, because I would certainly be expecting it to be one of his best. Still sounds very intriguing, though.

I saw Rope in college, and was fascinated to learn that it was based (to a point) on a true story about two gay men who had killed a 14 year old boy. Sordid stuff, but it made for great fiction!

I'm a big Hitchcock fan too! I saw this one awhile back. I agree, it wasn't the most suspense filled film. Though, I guess it was a bit different and had a different style than some of his more popular ones. My favorite Hitchcock films are Vertigo and Psycho. I enjoyed reading the review, thanks for sharing!

ROPE is a hell of a movie. Even if the hidden cuts are glaringly obvious these days, having been ripped off by so many directors (like De Palma) since.

Favorite Hitch movie. I find it so weird that I can watch this movie over and over again and never get bored. I love the actors, especially Farley Granger (who is in my other top Hitch movie, Strangers on a Train), and John Dall as Brandon - such a devilish performance from Dall, I love it. The part where he puts the rope into the drawer with that ghoulish grin on his face is the best.