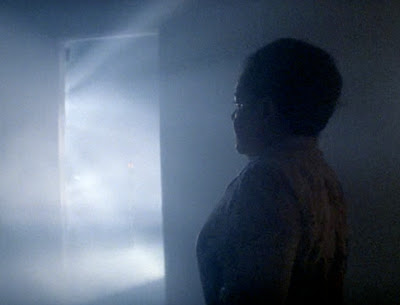 For as long as I've remembered watching Poltergeist, I can remember being plagued by the desire to know. To know what? Dude-- to know. I want to know what is beyond the closet. I want to know exactly what it was Diane found on the other side and I want to know exactly what happened over there. The concept of a rope being put through the closet and coming right through to the other side with Diane somewhere in between, has always confused me. It's confusing because it doesn't make any damn sense. I know "sense" isn't really important in matters such as these but go with it. The whole layout of the other side when paired with the concept of the rope, makes about as much sense as the layout of the Full House house. You can't go up one set of stairs and end up on one side of the hallway and then go up a completely DIFFERENT set of stairs and end up on the same side of the hallway, you know what I mean?

The question of what's beyond the closet is one of those things that I think about at least once a week, right behind more important questions like the proverbial "if a tree falls in a woods..." question and also, "why can't Dick Miller be MY next door neighbor?" question. In my mind, when Diane passes through the closet she comes out in an exact replica of their house only no one is there. But if that's true than nothing makes sense again. If they told Carol Anne to "run towards the light" then the light should mean "the way out" which is beneath the dining room table. So when Diane went through the closet she had to book it to the dining room table, find Carol Anne and then get yanked out. Meanwhile she only had 10 seconds to do this because Steven is a bastard.

BUT when the tennis balls went through the closet, they came instantly out the other side. This is what trips me up. Why didn't Diane just instantly fall out the other side? What happens over there? Is it because she's a living soul? Probably. An easy solution is to say that the other side is just a place. It doesn't resemble their house, it's just simply a place to pass from one life to another. When Diane goes through she's just in an area, with the light on one side. But what fun is that?

It seems to me that Carol Anne, when trapped on the other side, spent most of her time running around and looking for her parents. This is why I believe that the other side resembled their house. Putting aside all that gibberish about whether or not anything makes sense (which it doesn't) I love to imagine what Poltergeist would be like if they included Diane's journey through the closet. If they had included it I'm sure it would have looked stupid and been stupid. And granted, no one is suppose to know about that secret until they've passed on but Diane got to know and Carol Anne lived there for a few weeks so why dammit can't I know too!? I envision it to be like a negative composite of the Freelings house. A space bathed in darkness with an eerie unnatural silence. I also like to think of it as a doll's house, seemingly frozen in time where you can't eat the cute little bowls of fruit.

And yes I know that technically everyone got to go to the other side in Poltergeist II, aptly named The Other Side. But screw that, I'm talking about the Poltergeist here and now. So in closing I hope that many of you have suffered the same amount of frustration and intrigue with matters concerning the other side. What does beyond the closet look like to you? What does it all mean? Sometimes I think I understand and then I cry because I don't. I really don't. It's like watching LOST and explaining it to people. Somewhere along the way you realize you have no idea what it means, so you just tells lies instead. Well I'm sick of the lies! Why can't my closet turn into a portal to the other side? Then I would know. All I would need is a rope, and someone stronger and smarter than Steven. 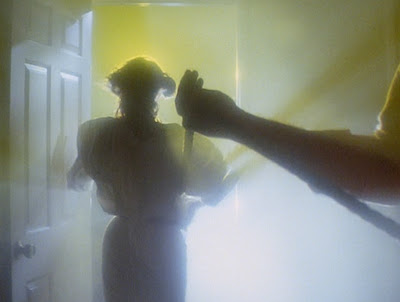 I've gone cross-eyed. I can't say that I have as much experience with or have thought as much about this aspect of Poltergeist but it really does seem like a frustrating, unsolvable problem. Likely, the filmmakers don't even have an answer to your question which is also frustrating.

I'll have to rewatch this and think about it...

You haven't read The House of Leaves, have you? I think it might make you a little crazy. :)

The afterlife...the other side I guess is supposed to be heaven or something. Cause when they go to the other side in part II, they get to see their dead grandma floating around like some angel.

My question is why was grandma all alone on the other side? Why werent their more angels flying around? And if its heaven, then why did the bad guy suddenly show up?

Its true, the whole idea behind the other side on the Poltergeist films is confusing, but I dont care, it makes for a fun film non the less.

By the way, Ive been enjoying your Poltergeist posts, these three movies are some of my favorite supernatural films! Mainly because they focus so much on the importance of love and family.

I have not John, but have heard similar sentiments. I think I'll leave that for when I feel less crazy...which is never.

I haven't seen the sequels since I was young, but in Poltergeist Tangina says it is more of a purgatory type place. A resting area between Heaven where spirits have not passed on because Carol Anne's light is such a distraction.

I don't know about II but I think the Grandma wanted to stick around and protect them, so that could be why she chose not to "go on".

R. Kelly is probably in the closet. That's why it was after Carol Anne.

The best realization of an "Other Side" in movie or television that I can think of is the Black Lodge in Twin Peaks.

Matt: Oh, yeah, it's brilliant from start to finish. One of my favorite books. But I think it might beat up Andre's brain, given how much of it plays with the notion of elastic and non-adjacent space.

Have you read the book? There are chapters about Carol on "the other side". I only read the book because I was sick and there was nothing else to read in the hospital...