Hellbound: GET OFF ME SUCKA! 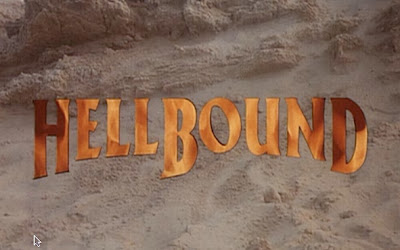 I was a little nervous when Stacie assigned the Chuck Norris-centric Hellbound for this months Final Girl Film Club. For one reason or another I never got on board with all that Chuck Norris business. I mean I can appreciate it and all but I feel like things got a little over played when it hit its hey day. Watch a film like this however and it's easy to understand why things developed the way they did--Chuck Norris is fucking ridiculous. By using an easy math equation one would assume that Chuck Norris in a horror/action film where he is up against Satan's emissary would be pretty amazing. Something however does not quite add up and Hellbound just turns into a giant ridiculous mess. Oh wait a minute....I did the equation wrong--that WAS the expected outcome! In that case, Hellbound rules!
Our film begins with your typical Star Wars knock off vertical scrolling bar. 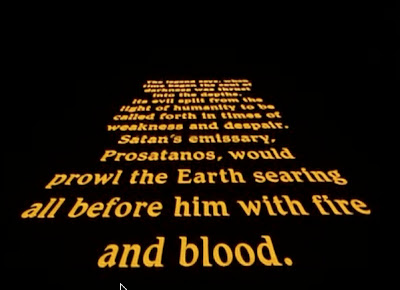 It tells us the basic information setting up the plot-- I'm not sure why those plot points couldn't have been described to us via regular text on the screen but...oh well. Apparently, Satan's emissary, Prosatanos is called to rid the world of its inhabitants when there is weakness and despair or something. Prosatanos attempted to do this during the Crusades but luckily King Arthur was there to thwart his plans. In the 1950s a couple of hoodlums broke into the tomb and accidentially unleashed Prosatanos. Now in 1994, Prosatanos has reclaimed the pieces of his mystical scepter and is ready to bring about the end of the world--again. That is of course, unless detectives Shatter and Jackson put a stop to it.
Right off the bat things got a little kooky when King Arthur and his men were suddenly doing battle with creepy face Mcgee and a bunch of red faced and cloaked Darth Maul impersonators. 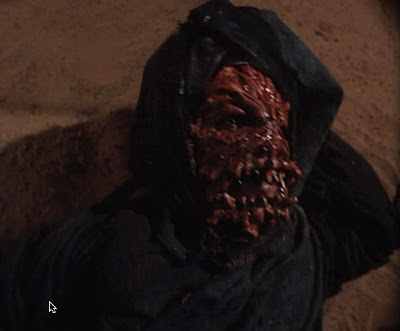 Things got even kookier when I realized that Chuck Norris' partner is none other than Joe Gipp from Adventures in Babysitting, which just happens to be my family's collective favorite movie. 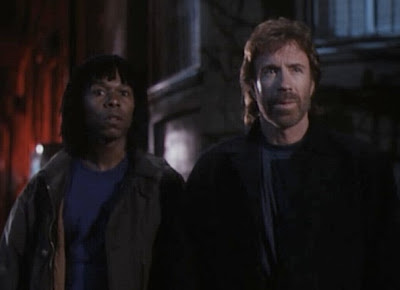 I should point out that because of this I will refer to him as Joe Gipp. Don't be confused. These two have just a swell good cop, bad cop, black cop, white cop, thing going on and isn't it just lovely. Isn't it just so funny when Joe Gipp says something zany??
I was also pretty surprised to find that Christopher Neame played Prosatanos himself. Christopher Neame for those of you that do not know plays Johnny Alucard--a disciple of Dracula in Dracula A.D. 1972. 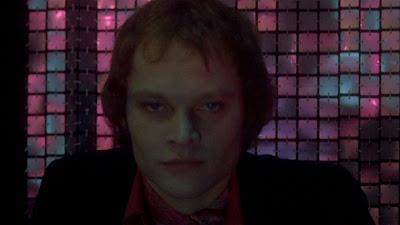 Apparently the man is always just creepy enough to be some evil perons's sidekick but never the evil person...interesting. This guy in case you didn't realize is really really strange looking. 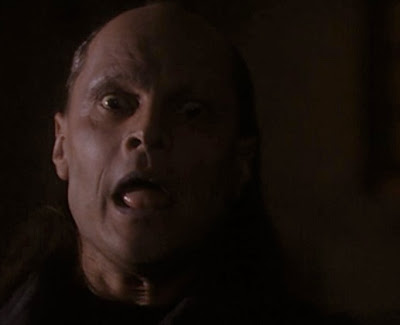 He creeped me out when he was younger and he still has the ability now. Perhaps what makes it even worse is that Prosatanos gets to wear an absolutely hideous wig and have long fingernails painted white. Hooray!
The film's set up is strange. We get sort of an action/detective story hybrid. When Prosatanos kills, he does it with what is apparently a lot of demon angst. Whether this is due to his demise at the hands of King Arthur or because he is balding, we'll never know. Regardless, he likes to do things in a big way and then at the end he tacks on his crazy face for good measure. Observe when he pulls a Rabbi's heart out of his chest. 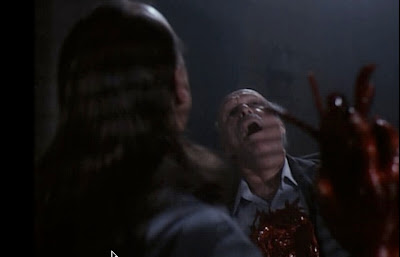 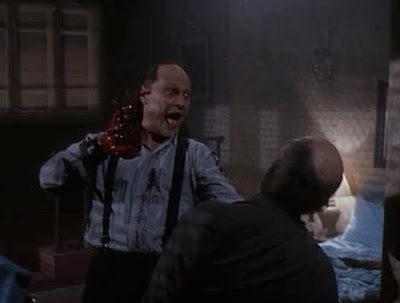 Gosh he's so demonic. Oh! I almost forgot, when he's really angry and really being a demon he uses his deep demonic voice. Which is as we all know your standard synthesized angry demonic voice. A true treat.
Once our pal Chuck and Joe Gipp decided that what they are dealing with isn't necessarily from this world, they head to Israel to find out more. Here is where our film turns into a bit of a comedic bromance. My favorite thing about the film overall was when they would play this kooky Israeli music whenever something funny was happening. Really great stuff. For instance...when the Israeli cop was driving too fast and Joe Gipp said he was a shitty driver...*kooky Israeli music* and then when there was that GREAT chase scene when looking for the kid that stole Gipp's wallet *kooky Isreli music*. Honestly, it was the greatest thing ever.
Basically in terms of Chuck Norris awesomeness this film is kind of a letdown. There is simply way too much down time. If you need to introduce some Israeli kid who knows about the secrets of Israel, why do you have to force us to watch 20 minutes of him stealing a wallet, and Chuck Norris trying to get it back. Just have him be there god dammit. Oh sorry I forgot we needed that scene because how else could we possibly end the movie without a freeze frame of the kid stealing Gipp's wallet AGAIN. 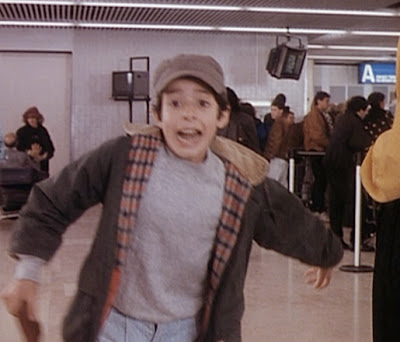 Silly me.
There is also not a lot of action, which is surprising for an action sort of film. The final fight scene is kind of whomp whomp in my opinion. The little Darth Mauls are back, Joe Gipp gets tossed about 15 times and lives, and Chuck Norris kicks Prosantanos a few times before delivering the fatal blow with the scepter. There wasn't any fire or explosions, or cool demon things happening at all. If Chuck Norris is supposed to be fighting a demon, I want him to be fighting a demon and not some guy wearing a bad wig. Where was the excitement? Oh and also this fight scene should probably in be in Hell. Just saying.
When it comes down to it, Hellbound fails to deliver what we really want. We really want fucking Chuck Norris fighting a fucking demon. But nope! Just some silly bromance, an annoying little kid and more dectectiving (yes I made that word up) than there are sweet moves. I want some sweet moves, is there something so wrong with that? Even in the beginning plot summary it says Prosatanos will prowl the earth with fire and blood. There was a little blood, but really? There was barely any fire, candles don't count. Poor show. I expect fire when dealing with Satan, ya know?
However, here are some of the finer points.
When Prosantanos lifts that guy above his head, I just LOVE how the director (who was Chuck Norris' brother I should add) utilizes this cool shadow technique. Unfortunately, the "body" that Prosantanos is holding looks more like a box with a head. 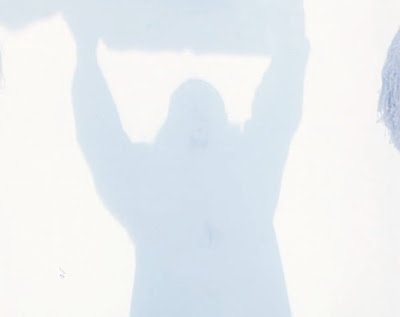 I'm guessing it probably was a box with a head.
When there was a sweet fight scene in Chuck Norris' apartment, there was a convenient thunder and lightning storm to make things look really neat. 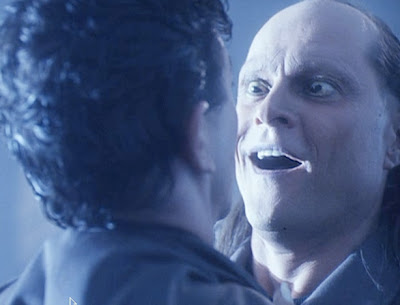 When the fighting stopped, so did the lightning! It was like a miracle.
Only seconds before Prosantanos' demise, he shows off his cool demon powers by teleporting from place to place so that Joe Gipp can never shoot him. For some reason, when the scepter is across the room and Prosantanos must reach it before Chuck can, Prosantanos thinks the best way to get there is by awkwardly running. 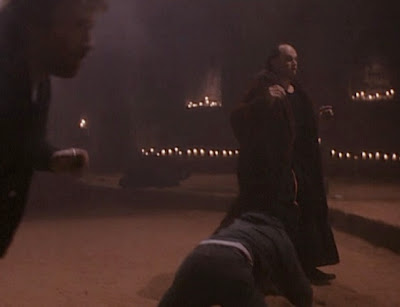 Umm hellooo use your cool teleportation powers dude.
All in all, I think Hellbound secretly wanted to be an Indiana Jones movie. All the elements are there...heart being ripped out, silly local kid, useless woman, archaeology--it's quite clear. Unfortunately the film will have to remain what it is--a less than stellar action flick with a less than stellar demon and some less than stellar moves. Sorry Chuck. It's just that I expected more from the man who was responsible for the extinction of the dinosaurs...
Posted by Andre Dumas at 6:13 PM

I made the same Indiana Jones comment, but I guess it's pretty hard not to see. Also, since you mentioned the Israeli music, I find it funny that Golan and Globus (Cannon films) were both Israeli. Ironically, the most offensive Israeli stereotypes in cinema history are probably courtesy of them.

I TOTALLY agree that this is like a poor man's Indiana Jones film! When watching this I just kept wishing that the little kid was played by Short Round- that might have improved it! In Indiana Jones and the Temple of Doom doesn't he say that Short Round is with him because he stole Indy's wallet?? I think Chuck and Joe Gipp should have caught the kid and brought him to the final battle with Prosatanus, and of course injected some more kooky Israeli music....

Holy cow, I really need to start looking at the cast list closer...had no idea Neame was Alucard. I swear, you're like the walking horror blogger encyclopedia of awesome connectionality.

I blocked the stupid wallet stealing kid from my review, because it was that freaking stupid. I also wanted to spend half the review talking about the ominous randomly appearing Jesus look alike, but there's probably a book to be written on that one.

Ha Thomas good fact about Cannon films, I had no idea! That is very odd. I think I'm behind on Israeli stereotypes, is being a shitty driver one?

Mike- He looked so damn familiar to me, and then I consulted IMDB of course and duh. He really is a creepy guy. But ahhh! I had a screenshot of the creepy Jesus guy and I totally forgot to use it. SO RANDOM.

Yeah, there's regular Jew stereotypes and Israeli stereotypes, and it can get confusing. I guess when there are dudes running around with machine guns yelling about protecting the holy land, your driving concentration is probably gonna take a hit. Also, that Israeli music that plays is not part of the soundtrack. Israeli people actually make that sound when entering a room. They could have taken the sounds out in post, but the filmmakers wanted an honest and realistic portrait of stereotypical Israelis in this "Chuck Norris kicking Satan in the head" opus.