Kill Baby...Kill! AKA Operazione Paura AKA Curse of the Dead AKA Take My Breath Awaaaay 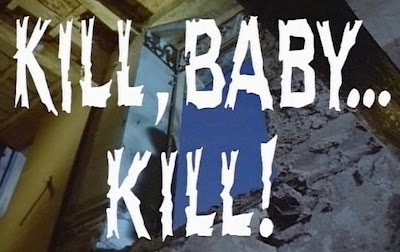 The deeper I throw myself into the Italian horror world, the more I become invested in Mario Bava. It's pretty easy to understand why I prefer Bava and by default Argento over Fulci. It's all a matter of personal taste and my hunger is screaming out for atmosphere and beauty-- things that I have a hard time finding in Mr. Fulci's later work. There seems to be a true sense of awe when I sit down and watch a Bava film. There's something so uncharacteristically beautiful about all of it that it makes me swoon with excitement. Maybe it's because Bava's films aren't dubbed and because the story actually makes sense for once, or that it just gets me so excited to recognize where some of my favorite horror movies get their inspiration from. It's a combination of all of these things but the biggest one is that these scenes are some of the most beautiful scenes I've ever laid eyes on.
As is custom with most Italian horror, Kill Baby..Kill! has a silly name, and about 20 different ones at that-- none particularly moving. The story however is pretty simple; villagers of an old and neglected town have been committing what appears to be suicide at an alarming rate. When a sexy 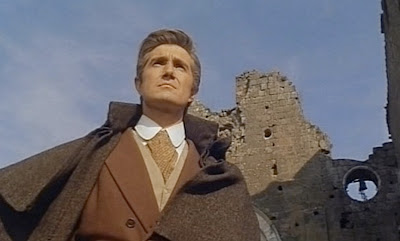 (I mean he's a little sexy right?) doctor comes to town he finds that the victims have all had gold coins inserted into their hearts. Soon he learns of a 20 year or so old curse that involves the ghost of a young girl who drives the villagers to kill themselves. Is it really a ghost or could there be something more sinister involved?
I just love ending synopsis' with silly questions! Well, as it turns out the film is substantially creepy. Paired with the incessant howling of the wind and what sounds like childlike giggles, is the claustrophobic landscape of this barren almost ghost-like town. Its narrow streets and shadowy houses are the bread and butter of creating a haunting atmosphere and yes, it works. All of this is the foundation for a story riddled with the ever creepy image of this little girl. 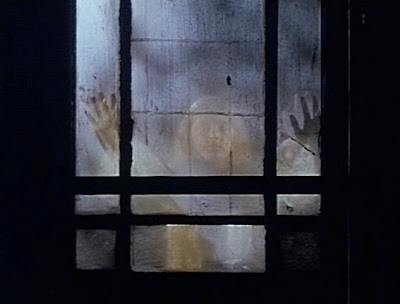 Let me tell you that Bava has a real talent for being able to mess with his viewers in terms of faces. We saw it of course with The Drop of Water in Black Sabbath and we see it again here with this little girl and with....dolls! 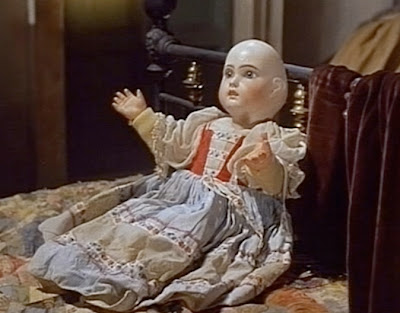 Yes, there are creepy dolls in this so brace yourself. Accompanied by the sweet tinkling of piano keys and giggles, this little girl not only has the power to scare us with her angelic glow of a face, but also with only a hand! 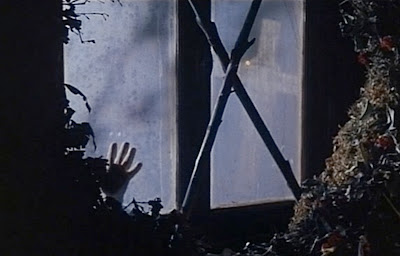 The thing is--as terrifying and creepy as those images are they are also stunning. Shadows, lighting, shades of green and red (not sure where they got those special light bulbs at the turn of the century but....*cough*) all make each shot of the little girl pretty breathtaking.
While the story line behind the villagers, the witchcraft and the coins in the heart is all very good, I find that what I am most attracted to in this film are the beautiful shots. Let me tell you about one of the most thrilling things I have ever witnessed. While ambling through the eerie villa of the Baroness, Paul (the sexy doctor) walks down a green tinted hallway, adorned with wait for it....arms as candle holders. 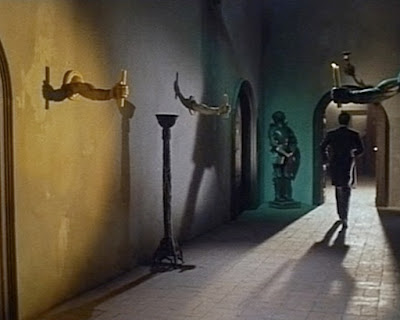 Yes. Yes! How cool is that? This picture of him walking down the hallway, with the green and the shadows and the arms is just fucking great. There's no other way to describe it. It's pure perfection in the eyes of me. Not only this hallway, but the entire villa is like one gigantic slice of Andre's dream come true. Cobwebs as thick as rope, creepy pictures of creepy children, dolls, SPIRAL STAIRCASES 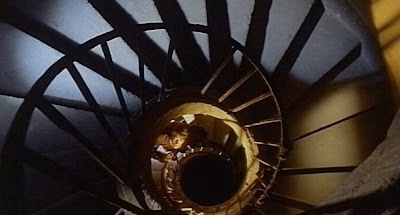 it's all so fantastic. The villa in particular, with its hues of eerieness and its never ending hallways of course reminds of Suspiria which is perhaps why I take an even greater liking to it than the average person. Speaking of nightmarish--the scene where Paul is chasing after a man and he keeps entering a door and then entering the same exact room over and over and over and over again??? Gosh, I hate it when that happens. But, again shows that what Bava serves up over at ye olde villa de baroness is completely insane in the best, most beautiful way possible.
Aside from all that fantastic imagery, there is still a pretty captivating story. There's certainly a mystery when trying to decipher just why people are haunted by the little girl and what's more--who is really behind it. Sure, the part I mentioned above with Paul's chase scene is a little strange and almost out of context but it makes the appeal of the story and all the talk about curses and witchcraft much more alluring. The characters are kept to a minimum thank goodness, and nobody has the same hair color. I mean that's my main gripe with Fulci--I can't keep track of all these blonde women that kind of look the exact same OK? The scene involving the younger girl's brush with the ghost girl is interesting and her "exorcism" as the doctor calls it (I'm guessing a mistranslation) is both creepy and somehow unsettling. 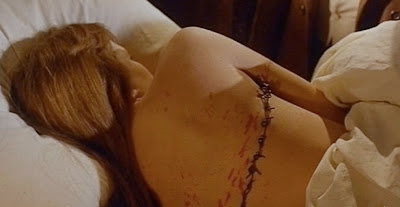 My only big problem with the film is that the ancient curse stuff and the witchcraft aren't as well fleshed out as they maybe could have been. There seems to be a strong divide between the curse and the mystery behind the ghost girl and for some reason they do not seem to join up as the film nears its end.
I did however quite enjoy getting a first hand look at just how manipulating and convincing that little ghost girl can be. 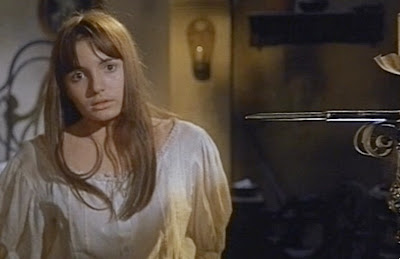 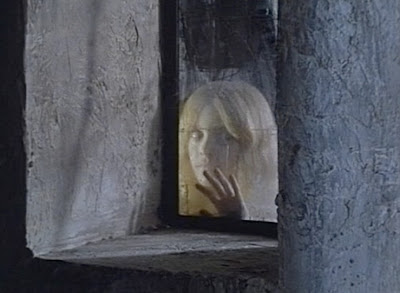 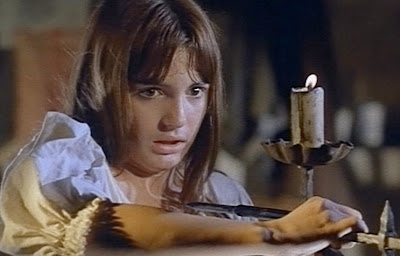 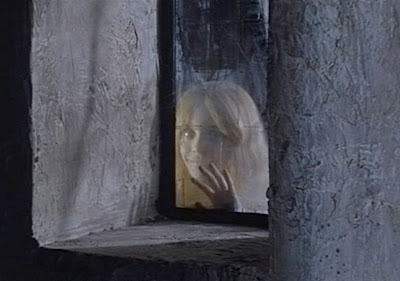 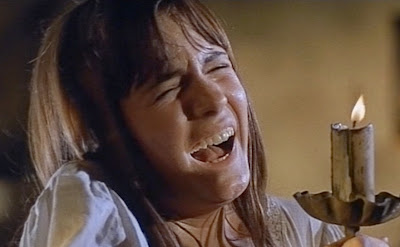 OK FINE.
And how about this little familiar interaction? 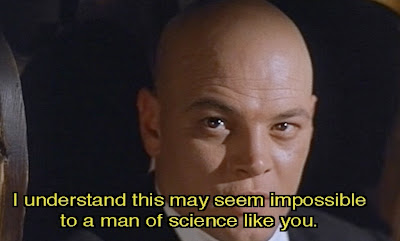 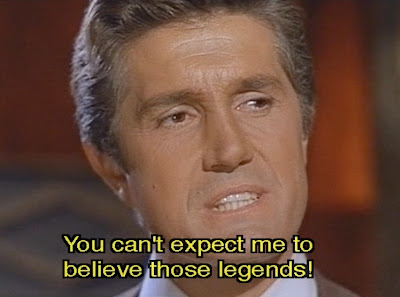 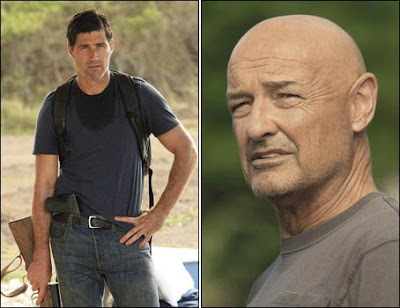 Man of science....man of FAITH?
Isn't that creepy? Not only does sexy doctor Paul kind of resemble Jack Shepherd as an older gent, but hellooo he's a doctor. And this bald guy was also in a wheelchair! Ok just kidding, but I mean he's sitting down so close enough.
In short, if you have seen some Bava and not seen this one, do yourself a favor and get it immediately. It contains some of the most aesthetically pleasing shots I have seen and has atmosphere coming out of its...face. That's right its FACE.
Posted by Andre Dumas at 9:35 PM

yeah, this is definitely one of Bava's most visually stunning films. But in discussion with other Bava fans about it I'm surprised at how few of them rate this one.

Anyway, I think it's great. And a cool bit of trivia is that Federico Fellini took the idea of the demonic little blonde girl for his film TOBY DAMMIT from this movie. So Bava was even inspiring Fellini at that time!

Great review...I'm gonna pull it out and give it another view!
I'm more into Argento, but there's no denying Bava's style. Fulci is on a whole other level. His thing is all about gore, not plot, lighting or atmosphere(although he does have his moments).

Great review - I felt the same way about this film. The visuals and atmosphere are amazing!