The Haunting: A Confession 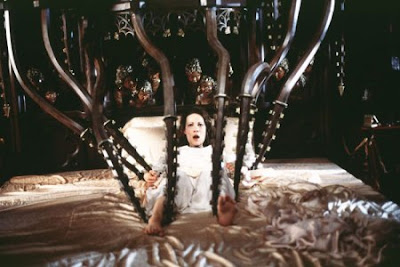 I’ve always been one to shy away from disappointing anyone. In fact, not disappointing someone is how I typically justify lying, which depending on your morality scale makes me either a terrible or okay person. When faced with writing this article however, I realize that both lying and trying not to disappoint people is out of the question. I am going to disappoint most or all of you and I’m ready to take any of the insults that you will throw at me (but I am not promising that I won’t cry). So here goes, the first version of The Haunting I ever saw was the 1999 remake with Liam Neeson. I was 13 years old, I was allowed to be watching it and I loved it. 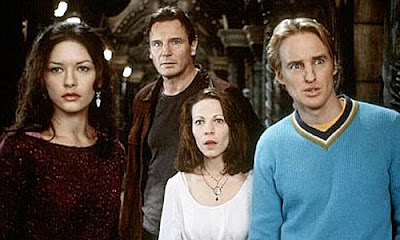 Before you get all angry towns person, on me you should be advised that under no circumstances am I saying that I enjoy the remake of The Haunting more than the classic 1963 version, nor am I saying that I think it’s better. I’m simply stating that when someone is young, impressionable and believes that they are in a serious relationship with J.C. Chasez--- 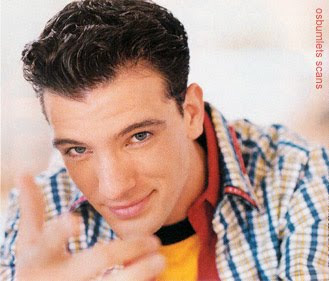 their mind tends to like movies that aren’t necessarily good. Even as horrible as the 1999 remake is, it still contains a few shreds of fear that continue to get to me today. Yes it is a terrible, god awful film, but I do have this strange soft spot for it and for that, I can never forget it.

With 5 Razzie nominations under its belt, including one for Worst Picture, The Haunting is a clear cut example of how not to do a remake. It replaces everything that was wonderful about the original with everything that is horrible about modern horror movies. The simplistic plot is exchanged for a complicated story about child labor, great,great,great grandparents and purgatory. The subtlety of the haunting and the fear is exchanged for spectral children, eagle statues that come to life, and giant CGI hands. The 1999 remake of The Haunting becomes less of a haunting and more of a spectacle. Is Hugh Crain really a ghost or is he a demon? Whatever he is, he is ridiculous.

Although The Haunting does many, many, MANY things wrong, I did mention how there is the slightest remnant of things to talk about. Namely, the architecture of the mansion, the colors employed and a few surprisingly chilling moments. The film does do a good job (at least in the beginning) of building the atmosphere and more importantly, the life force of Hill House. The sound is used effectively to almost make it seem like the house contains life--it creaks and groans and even breathes. It personifies the house in such a way that it turns Hill House into its very own characte-- that is of course until the last half of the film destroys this. Yes, somewhere down the line, the menacing demon hands and face of Hugh Crain take over, and all character of Hill House vanishes. We can’t have it all I guess. 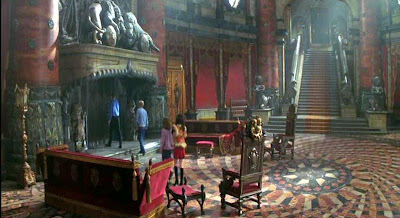 The brief scares I referred to come in the form of what is surprisingly a few rare instances of subtlety. The first is the hanging body of Hugh Crain’s second wife in the greenhouse. 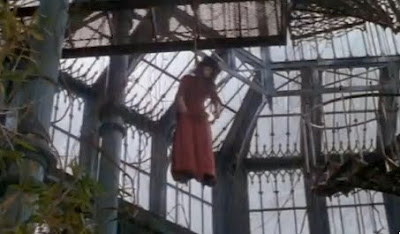 When I was younger (and still a bit today) the very glimpse of a hanging person scared the pants right off of me. This moment of hanging was neither expected, foreshadowed or innocently shown. One minute Nell is in the greenhouse, the next she looks up and she’s a hanging body. Not very nice to my 13 year old self and my fear of hanging.

The second is an even subtler moment where Nell, off flitting about in a tizzy about “the children, the children!”, looks into the mirror and sees her own face transforming before her eyes. 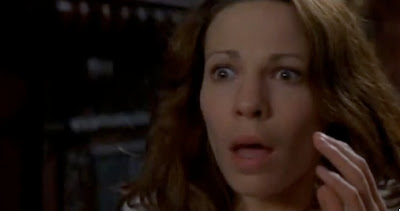 She looks and opens her mouth slowly to unveil a set of teeth that do not belong to her.

Next, she looks in a different mirror and is terrified to find a new set of eye brows that completely change the way she looks.

I can’t tell you exactly what it is about this scene that gets me (and oh yes, it still gets me) but I think it has something to do with how unnatural those teeth and eyebrows look on Nell. The teeth especially, are unexpectedly chilling and they really rub me the wrong way.

So is that it? Is that all the good going on in The Haunting? Well, partially yes. But as I re-watched the film today, I remembered what I used to think was terrifying. These things are as you might have guessed, not actually terrifying in the slightest. As a 13 year old I was obsessed with how creepy the little children in this were.

For some reason I failed to notice the strange effect that made the spectral children about 2 feet tall. I also failed to notice how stupid they looked. For the same reasons, I was appalled by the bloody footprints of the children leading the way to the hidden study. After a few solid years of watching horror movies nonstop however, I have now come to notice that the footprints resemble paint more than blood and that their presence is equally cartoonish.

Lastly, I used to think that the scene where Liam Neeson gets scooped into the giant fountain, by the enormous man statue which then proceeds to spurt out blood--was the greatest thing since the blood elevator in The Shining.

Now however, the very idea that a statue grabs Liam Neeson’s character and that he just rises up out of the fountain barely shaken, is preposterous. The statue spurting blood is kind of neat, but it still loses me in the very absurdity of the situation. Keep in mind that before this moment, Liam Neeson’s character was a firm believer that Nell was just crazy. Talk about the absence of proper adjustment to the supernatural elements.

So yes, I am slightly embarrassed that this movie still has a special place in my heart. But hang on because I’m about to get all preachy. Without the existence of the Haunting remake, I highly doubt that I would be as into horror as I am today. The film created this strange sense of wanting to be scared in me. It caused me to like that feeling and what’s more, it caused me to want to watch something that terrified me over again.

Additionally, it is because of this remake that I chose to seek out the original The Haunting in the first place. This is one of the reasons why I am a closeted supporter of remakes of classic films. Remakes occasionally can be gateway drugs into the bigger and better world of horror classics. Often times they can introduce kids who are interested in horror to the usually far superior originals. Original films that these same kids would probably not have come across otherwise. Do you really think that me and my girlfriends were going to pop in the 1963 version of The Haunting on that Saturday night? Probably not--and that is where remakes stand to be important.

So what if horror remakes are ruining the horror genre? Are they really? In my opinion--no. The originals will always still exist, just as our memories and our love for them will exist. All remakes are really doing is exposing a new generation to a story that was successful at least once (or in the case of the Blob, three times) before. So give kids some credit. If we’re lucky they’ll turn out like us--and realize that there just may be something better than what is given to them and they will seek it out and fall in love. There will of course be the oblivious ones--but they don’t love horror and we don’t really care about them.

We are the same age and I am struck by the same feeling for this movie.

Of the four actors in the picture, only Lili Taylor has escaped personal tragedy in the years since. Is the Haunting a cursed movie?

Several of the movies I can remember freaking me out as a kid (e.g. Friday the 13th VII, the Watcher in the Woods) seem not so good now.

Great article, really loved it, and I really love your writing style. It is conversational, yet eloquent. I try to come off as such, but I think I just come off like a narcissist with a penchant for writing funny sounding words.
I will give you my own confession. I used to watch the show Friends religiously, and I was never particularly into horror as a child. Halloween, yes, but I was a nervous child. I was terrified of horror movies, afraid they would make me scream or throw up. Also, I'd just moved from a busy street, to an isolated street in a new town, that was far woodsier. So, I was scared enough. But then, several different things happened, which changed the course of my life.
I started to read Goosebumps books, and fell in love with them. Also, I watched Are You Afraid Of The Dark for the first time, and yes, I was. Less then a year later, I watched The X Files for the first time, and became addicted to that. And then the biggie, someone gave me a hardcover of Stephen King's Nightmares and Dreamscapes. I was about twelve, or early thriteen, around then. I'm still riding my Stephen King high, despite all the crap he pumps out on a regular basis.
Around the same time I got Nightmares and Dreamscapes, my mother rented Jaws for me for the first time. Needless to say, I was afraid of taking a bath or going in a pool for a year afterward.
Anyway, point is, everyone starts out on something cheesy or silly, but it is where you go from there that matters. I think you have incredible taste in films, so obviously the path you chose was a good 'un.

matango--That is wild! The Haunting is clearly the new Poltergeist in terms of cursed movies.....

Sean-you are too kind! Don't get down on yourself and your writing. I think you are well on your way to success--don't forget you're just starting out in your real blogging experience. If you want to feel better about yourself, read some of my earlier reviews--they are terrible! It just takes time to fine tune your "style"

As always your comments are thoughtful--we have similar experiences on the horror front though. Horror terrified me as a wee one too, it made me really panicky, although Are You Afraid of the Dark definitely gave me the "taste" early on!