Well, I Guess They Were Right--Gremlins 2 IS a Bad Movie. 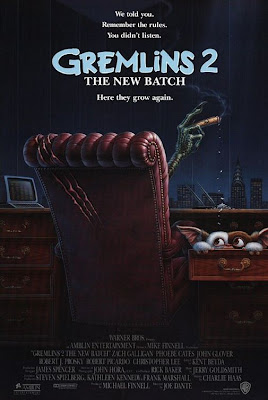 After watching Marathon Man a few days ago I knew I would have to back and watch Gremlins 2 for the first time in quite awhile. I wanted to make sure it wasn't secretly a good movie that everyone was pretending to hate just so they could have all the love for it to themselves. Turns out- it's a pretty bad movie, but for some odd reason I held it so near and dear to my heart as a child that it almost hurt. What was it about this dreadful sequel that made me rent it every month or so at the local video store? I'm guessing the cuteness of Gizmo is to blame, but these days you just never know. While the movie is bad, you can't deny the fact how simultaneously strange and amazing it is that Christopher Lee is in it or that the movie withholds the possible record for most movie references in history.
But first I wanted to share with you all something I found to be very uncomfortable. I speak of course of the fact that the fuzzy Gremlins have human fingernails. 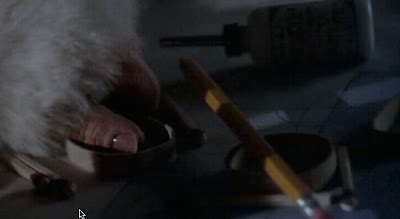 Seriously....what the fuck is up with that? Not only are they perfectly manicured but these hands are on the verge of killing me with their likeliness to....ugh....puppet hands! 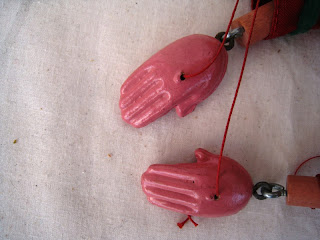 Why would they give something so cute, something as horrendous as real fingernails? Bleck.
Also, speaking of Marathon Man--didn't I just see this guy in that movie? 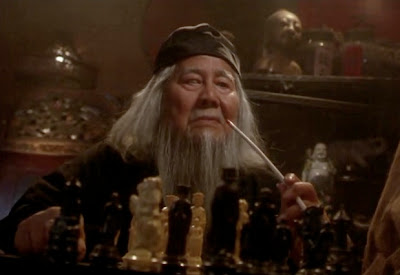 What is the deal with old Asian men and their cataracts?
Aside from the fact that Clamp is a horrible name for a dynasty of high tech...stuff. I find the building regulations to be a little strange. For instance, Billy is cited for having an unauthorized potted plant in his office because it could be carrying aphids. 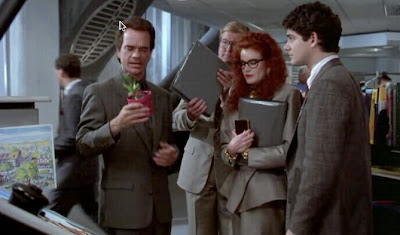 The annoying woman with the worst New York accent in the entire world (who also sometimes sprinkles some British in there) is however still allowed to smoke like a chimney. 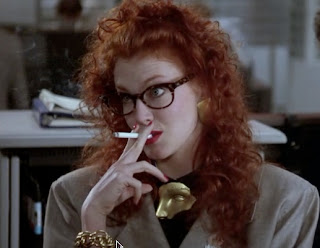 Interesting.
Can you believe how big this pot is? 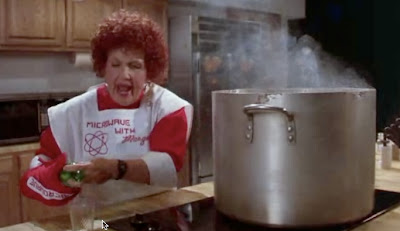 Have you ever seen a bigger pot? I wonder if the only reason they got such a big pot was because they needed to put a Gremlin in it. Yes...that must be it. 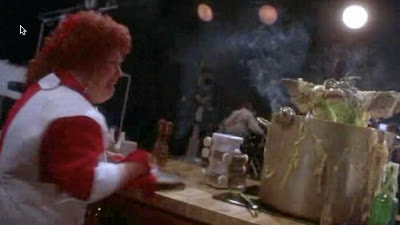 Back to physical characteristics of Gremlins that make me uncomfortable. These lips are ridiculous. 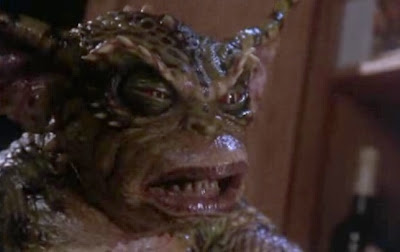 Who let Brooke Hogan into this movie and why does she always have to take her top off? 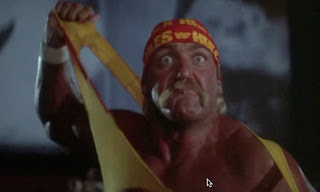 Also, someone should tell her that she's due for an upper lip waxing.
This may be the best shot in the whole movie. 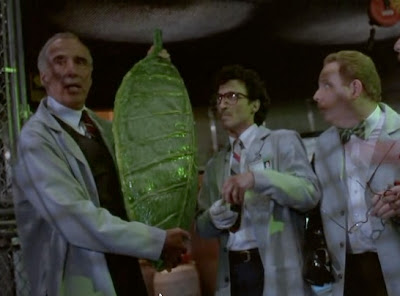 Christopher Lee carrying what can only be described as a pod person.
I just love it.
But anyways...I still laughed out loud here and there- mostly for nostalgia's sake but perhaps the movie isn't entirely bad. Turning it into a game of seeing who can spot the most movie references is fun, and I must say the scene in the elevator is actually a bit scary. For children of course...yes...yes for children....
So it may not hold up to today's standards, but who said we couldn't indulge in a little bad movie madness? The cameos, references and overall shenanigans of the Gremlins is enough to keep you entertained for at least 5 minutes after the ending credits roll. Hey, that's further than Waxwork got me. Sorry Zach Galligan.
Posted by Andre Dumas at 11:00 PM

Hi Andre, Sorry not a Gremlins comment, but I wanted to say thanks for recommending Braking Bad. I can't believe how good it is. I'm Through the first five episodes of season 1. I love it, and also I love you! Eddie.

Thanks Eddie...I love you too. Glad to hear you are enjoying it, it only gets better..!

The only time I've seen a bigger stock pot is in the corn cooking scene in Sleepaway Camp. That was one huge pot.

"Who let Brooke Hogan into this movie and why does she always have to take her top off?"

I remember seeing this movie and wanting to hate it, but somehow loving it. Like one of those adorable Chinese crested dogs.

Even though I personally disagree about your thoughts on 'Gremlins 2' (I love it!), your review was as entertaining and nutty as always. Keep it up, man!

Scot- YES. That is the biggest pot on record I think. I think what makes this Gremlins 2 pot stand out is that she wasn't making anything that required such a large pot. But giant props for making a Sleepaway Camp reference (My favorite good bad movie of all time!)

Dod- Hmmm would you say your love/ hate relationship was similar to the way one can love/hate a Gremlin in his fuzzy stage? Minus Gizmo of course because you always love him!

A Nightmare- Haha nooooo I love Gremlins 2 I'm just pointing out that it's a bad movie as far as all that technical movie jargon is concerned. It's just funny how this was pretty much my favorite movie for 5 years of my life and going back and watching it, is classssssic. I'll always hold a spot in my heart for it of course.

Gremlins 2 is only bad in the awesomelyest bad ways possible, and Dante entirely understood the film and how to make it a success. I love this sequel, so corny and goofy, really brings the Acme vibe to life on screen =D

I have always considered G2 (that's what I call it) to be almost as good as the first in entertainment value. I love G2 and that is mostly due to the very Warner Brothers/Looney Tunes aspect of the sequel. It's just so off the wall and ridiculous, and I think it was the perfect way to go since replicating the first film seriously would more than likely really suck. Great write up and those fingernails look the grossest when covered in boogers.

I'm one of the folks who likes "Gremlins 2." Maybe it's because I was in high school when the original "Gremlins" came out, and then just two years out of graduating college with a major in Animation when the sequel finally arrived. So the original was still very fresh to me (it was one of my favorites) and I definitely a Looney Tunes-crazed mindset. I also knew that Dante was on record as saying that he hated sequels so much that his goal was to send-up sequels to the Nth degree. I think he succeeded here. Rewatched it on Netflix Instant View a few weeks ago and still enjoyed it. Of course, it helps me tremendously to have John Astin, Christopher Lee and Dick Miller all in the same movie, but most of all John Glover and Robert Prosky deliver the goods and then some - their characters are fantastic. And... "welcome to the men's room!" Let's hear it for animatronics, muppets and sheer throw-all-caution-to-the-wind lunacy.

I'm pro Gremlins 2. Hell they made fun of Donald Trump before it was cool!

Nothing in this review shows any flaws in Gremlins 2.

In fact, I see here six counts of awesome.

Oh boo everyone misunderstood. I LOVE Gremlins 2 but by technical movie standards it's a "bad" movie. But of course as you should know, I love most good bad movies!

I guess I love that it serves best as a parody of Gremlins rather than a sequel. Best evidence is Phoebe Cate's poke at the super-serious "my dad died in a chimney and we didn't know he was there until we smelled his rotting corpse" monologue from Gremlins. I also love that Clamp is the personification of a Ted Turner/Donald Trump teleportation mishap. And the "science" of the movie is of the 50s mad scientist monster movie variety. I think I could write a book about Gremlins 2. Or at least a thesis paper ... or better yet ... a love letter. Yet, there is no getting around that it's a bad movie.