The Dead Girl: But not THAT Deadgirl 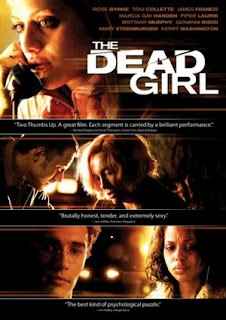 A few months ago I was scrounging around some semi high-brow horror website where they had a list of disturbing movies or something of that nature. One of the movies highlighted was Deadgirl and the picture above the title was that of Toni Collette looking vulnerable and naked. I responded with a kind comment saying that I was confused because the picture looked more like Toni Collette from The Dead Girl and less like Jenny Spain from Deadgirl aka GET YOUR MOVIES STRAIGHT (Note my comment really was kind and not sarcastic). It really bothers me when a completely wrong picture is used to talk about a movie, especially when you are a highly regarded site. If you've seen Deadgirl then you know....I mean you KNOW that that picture is not an undead zombie girl strapped to a table. Anyways my comment was never replied to and the picture is still there. How bothersome! I understand that the titles are basically the same but if you are doing a Google image search lets try to verify the picture beforehand. Like I said if that person was as disturbed as they said they were then they would recognize the difference. Hmmph!
So even though I had never seen The Dead Girl, I knew that various people has been raving about it which immediately warranted an add to queue motion and a few days ago, a move to the top of the queue motion. I am very glad I went into the film knowing very little about what would happen. I maybe had heard that it was disturbing or maybe that it was just plain awesome. But when I watched it, I was floored by how disturbing it was--yet in a complete polar opposite way from the likes of Deadgirl. While there are no naked zombies in The Dead Girl and no outrageous moments of blood and gore, there is something much more palpable and affecting. I'm talking about a real, pure sense of sadness, horror and fear. A fear of reality, or a fear for characters that seem so real, you truly care for their well being. It's quite an amazing and moving film, and while it might not be strictly horror based, it is still capable of affecting you long after you view it.
The film is centered around the sudden appearance of a dead girl in a small town near Los Angeles. The story is broken down into 5 vignettes of character's who are connected or affected by the dead girl in some way. It's an interesting setup and almost makes the film seem more like a puzzle. With each separate story we learn new bits and pieces about our characters and about how the dead girl came to be dead in the first place. I love how each character is either indirectly or directly affected and figuring out and analyzing the ways that they are connected, especially those indirectly connected, is thrilling.
Also not to be ignored is this extremely talented cast and all-star cast I might add. It pretty much goes without saying that I enjoy any movie that has Toni Collette in it (Yes even In Her Shoes) and even though she and all the other characters only have a small amount of screen time each-- each performance is as memorable as the next one. And get this guys. Yup BIG NEWS, I really enjoyed Brittany Murphy's performance. 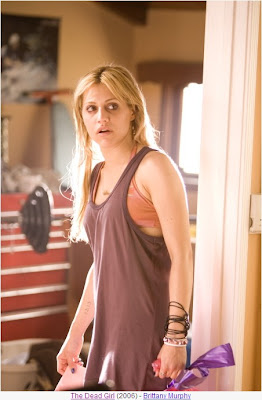 Yes she plays a crack addict whore again but, and a big but here, this performance moved me rather than fill me with bouts of nausea. Her performance is short, taking up the last 20 minutes or so of the film- but I'm telling you it's one of the most haunting and affecting 20 minutes that I've ever sat through. It could be the strange drawl she developed for the character or the sheer intensity in her face. But perhaps the most intriguing thing is that now that we've seen how every character is affected by the dead girl--seeing the dead girl and what affects her, is incredibly startling. So yes my relationship with Brittany Murphy has been patched up a bit- I still think she's a one trick pony but maybe now people will stop sending me hate mail and death threats after my badly timed Deadline review.

So in conclusion. Watch this movie. No it's not 90 minutes of a gore fest, naked women and boobs boobs boobs. Yes there are boobs- but not the kind one would enjoy. (Unless you're a psycho or an old woman saggy boob lover) But it is a unique form of a character study, a beautiful and moving film and some really depressing and eye opening stuff. Why would you want to watch some depressing, eye opening stuff? Because you just have to. It's best to go into this one knowing little, because putting the pieces together on your own will leave you in a wonderful sense of awe and intrigue. And also because I told you to. So listen.
Posted by Andre Dumas at 9:11 AM

It's such a terrific movie. The cinematography- ugh, it looks gorgeous...and what an amazing showcase for actresses. All of them. Toni Collette and Marcia Gay Harden bring it like you knew they could, but who knew Kerry Washington was so good?

I've recommended this movie to horror fans but they also get it confused with DEADGIRL. You're right about how sad the movie is. I enjoyed the structure of it, as well as Murphy's performance--well, all the performances. Oddly enough, my girlfriend and I watched this 10 days *before* Murphy died. Weird.

Fo realz, I didn't even recognize Kerry Washington! She was a-maaahzing. Oh and this was a little scary for me because I had just watched The Mist and went from absolutely loathing Marcia Gay Harden to crying with her. What a rollercoaster of emotions I've suffered thanks to that woman and her acting chops!

Will- I wrote my scathing Deadline review THE day before she died and people came after me with pitchforks. And yes I had a very troublesome time when I "tweeted" that I was watching The Dead girl and everyone went on and on about zombies and naked chicks and it was just a mess.

Nobody will ever do the crack whore with the heart of gold quite like Ms. Murphy.

I'll give this a look see. I know the late Miss Murphy took a lot of flak in the mainstream for some of her roles, but I found most of her body of work enjoyable. She was outstanding in Sin City.