The Bird with the Crystal Plumage: I Think I See Some Potential From This Argento Character. 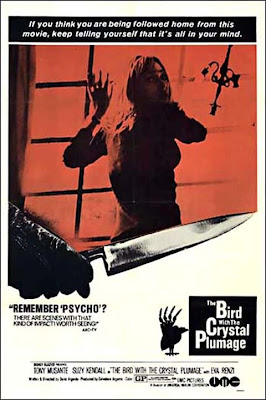 Well it has finally happened. I've set my sights on Dario Argento's directorial debut for the very first time. Was I impressed? Disappointed? Secretly aroused? Probably all of the above. It's a sticky situation- being so in love with Suspiria and waking up one morning and coming to the conclusion that you don't necessarily love Giallo, but really, what can you do? Here we have the birth of Argento's trademarks; the protagonist unwillingly witnessing a murder (or attempted murder in this case), receiving creepy phone calls, murderers wearing black gloves, our main character digging in their memories to find important clues, montages of dead women, animals, HOT love interests, bad dubbing--whoops OK I got a little carried away there. Let's just say that borrowed from Bava's masterpieces or not, Argento came out swinging, earning him, what my Netflix DVD sleeve tells me, the title of the Italian Alfred Hitchcock. Make of that what you will.
Sam is a writer suffering from that age old sickness, writer's block. After living in Rome with his uber hot model girlfriend, Sam walks home one night and witnesses an attempted murder. After being caught between a strange double glass door contraption, Sam can only look on in dismay as the stabbed woman cries out in agony, her killer fleeing once Sam got in the way of things.

Once the police arrive they take Sam's passport causing him to remain in Rome, where he soon becomes the murderers next target. The police believe the murderer is responsible for a string of murders and Sam, convinced that he saw something on that fateful night believes he can help solve the murder and put an end to the crime.
Now to begin with, there were a lot of elements that had me somewhat surprised that this was Argento's film. For one, the gore and moments of extravagant violence were toned down by about 75%. This wasn't a bad point of the movie, but it really just had me surprised I suppose. When murders would happen things would start to get exciting and then the scene would cut to a wall or something, where a little blood would be splattered. You can't be angered though because it is his first film after all. Take for example a few of my very first blog posts- nowhere NEAR as funny and well written. It's just a fact of life really. There were however some very amazing and remarkable things happening as well. The one that stuck out the most to me was the montage of all the past murdered victims in those black and white shots. How beautiful, and surprising. It was just about the most mood setting scene I could think of- so eerie and realistic looking and who doesn't absolutely gush over pictures in black and white?
The music on the other hand, was both interesting and distracting. There were two main themes that I can recall. The first being the really snappy and hip jazz tune. It sounded like a trio doing some really kicking improv for some really swinging jazz club. I totally dug it, man. To me, it represented an inkling of future music in Argento films- music that doesn't really seem to fit but somehow in some strange way it does fit. The 2nd bit of music didn't quite garner that same reaction from me. It was this odd soundtrack of a woman making some strange orgasmic noises. Every time our protagonist or a victim was somewhere and that music came on- I always ALWAYS rolled my eyes and wondered out loud- just who would have sex at a time like this?! It was so odd, and again one of those weird things that Argento usually nails but it just did not work out for me. Actually now that I think of it, it sounded a lot like the soundtrack from Black Sunday, which would make sense. Hmm. Well anyways, this just proves once again that we can't all be perfect our first time out of the gate.

One thing that I absolutely loved however, was how the twist ending for once was actually not that obvious and dare I say it, it threw me for a loop! In fact if you count all of the "twisty" endings except for the first one, everything had me completely surprised. I found this extremely reassuring, because it stands apart as another sign of good things to come. The twists that happen in Argento's Giallo films are usually met with that same surprised attitude. Granted in every case we meet the killer within a half hour of the movies start but for some reason I can never guess who it is. Maybe I'm just incredibly slow on the uptake but I find that to be one of the most refreshing things about Argento's films. Even the entire reasoning, or the story behind the killer was really unique and actually kind of believable. Once again- I dug it man!
So here's my thinking. If this was my very first glimpse at the work of Dario Argento- which it was for anyone seeing it at that time, I would have said this; he's not perfect but I see some incredible potential. Everything we know and love about Argento got it's start in this film and looking at his entire body of work- The Bird with the Crystal Plumage really is one of the better ones. Sure there aren't extravagant murder sequences, and the blood isn't that beautiful, but there are trace amounts of each those elements- oh and also I wasn't confused by any of the plot developments which is a first for me and my tiny brain. All in all a solid first stab by Argento that I'm sure instilled a similar feeling of anticipation for his future work in the minds of all that saw it. Although I will minus a few points for that crazy guy that eats cats!
Posted by Andre Dumas at 12:39 PM

And that whole sequence with the girl on the staircase was fantastic. One of the coolest Argento bits out there.

What, no love for artist and cat-eater extraordinaire Berto Consalvi? I love the eccentrics in Argento's early films. From 'So-long' to 'Gigi the Loser' in Cat O' Nine Tails to 'The Professor' and 'God' in Four Flies. This is Argento being... um... hilarious?

I think this is one of Argento's better plotted films, extremely suspenseful and stylish and a very promising debut for the Maestro. That taunting soundtrack has always given me the creeps as well. Unforgettable giallo.