Near Dark: The Other Vampire Love Story. 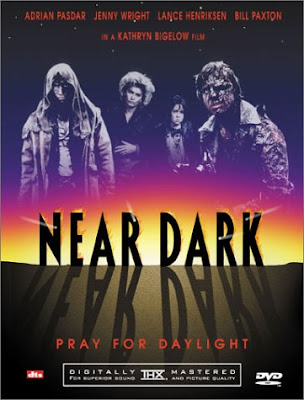 Well, seeing as our friend Kathryn Bigelow won the big Oscar award- and was the first woman to do so, I've thought it apropos to FINALLY watch Near Dark. I'll tell you something, I have a very clear reason why I haven't seen the film until now---it simply isn't talked about enough. Sure it was brought up a bunch when Kathryn Bigelow came on the scene again with the Hurt Locker, but other than that, nada. It is on Bravo's 100 Scariest Movie Moments (which I am almost done with can you believe it!) which even on that I can't remember the clip or what was said about it at all. Is it because it's not a memorable enough movie, or is it just insanely underrated? Personally I found the movie to be a grand old time, another unconventional and brutal side of vampire lore with the least bit of sparkles. Although I will point out- that Near Dark and Twilight both do something very interesting and controversial. They both change a major part of vampire lore- only Twilight seems to catch most of the flack. Oh put those torches down, I'm not defending Twilight! I'm just saying that it's interesting, that although Near Dark also changed a major facet of vampire culture, no one was up in a stink over it. Of course that's most likely because Near Dark is a good movie and Twilight sucks- but still it's interesting if you think about it.
Alright, to start with--if someone had told me that Nathan from Heroes was in this and he was 22 years old and that RICHIE from Teen Witch was in it 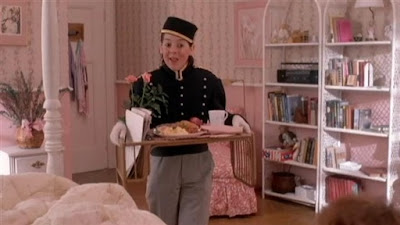 and grabbed Nathan from Heroes' BALLS, I would have moved this up in my queue a looong time ago. Imagine all those time I IMDB'ed Richie from Teen Witch and never ever realized he was in something I would someday watch. 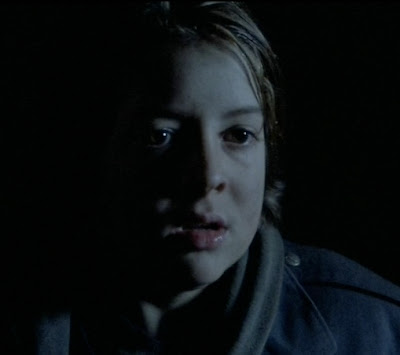 He's still just as creepy and...Richie-like and I loved every minute of it. Anyways. Nathan plays Caleb a farm kind of boy who happens upon a lovely blonde woman named Mae one night. Things get serious...maybe a little too fast and after a hot make out scene, Mae bites Caleb on the neck. As dawn approaches, Caleb doesn't start feeling too hot and a winnebago out of hell comes up and snatches him. We are soon met by Mae's possee of dirty, hickish, "vampires" who are pretty tough, and just don't like Caleb much. Will he be able to change their minds? Or will he soon find that hanging out with these folks just ain't all that?
First off- what a nice Aliens reunion. Seeing Bill Paxton in another role that requires him to be somewhat mentally unstable was great-and it really makes me question how he broke the mold. Who saw him in Aliens and Near Dark and was like...you know, I think he'd be GREAT as the nice tornado chaser in Twister. Or "well he's just the perfect guy to play a cool headed astronaut?" Who are these people? Anyways. Bill Paxton both officially creeps me out and excites me. Weird I know. 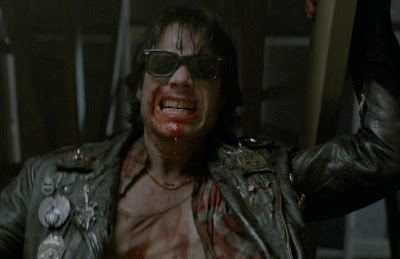 Now I'm going to play a game, I'm not going to watch the Bravo 100 Movie Moments before I finish this. I am hoping that the moment they chose to highlight was the scene at the roadhouse. What a great scene. Everything about that scene makes you feel so unbelievably on edge, it's ridiculous. You know these people are crazy, but are they crazy enough to drink everyone's blood and kill them? The answer is yes. This scene also has the power to make you feel really bad for Caleb. Poor guy just became one of you like a day ago- he's never killed anyone in his life and you expect him to just go for it? Crazy assholes. I LOVED when Diamondback slit that waitresses throat and all the blood just filled that cup right up. And every single shot of that poor guy who was playing pool? Heartbreaking. Also terrifying, are the scenes where Caleb sucks the dear life out of Mae's wrist. Holy crap, how much more invasive, awkward, uncomfortable, hot and depressing can you get? I love it.
Now onto the big controversy. Vampirism can be cured! How convenient. This is what I'm talking about when I say that Twilight and Near Dark do have something in common. Suggesting that being a vampire can be magically cured by something as easy as a blood transfusion is a little worse than having a vampire be able to go out in the sun. Well....no maybe not- but still! Those are ballsy things to change. I will point out though, that because the word "vampire" is never mentioned in Near Dark---maybe they aren't vampires at all. Heck, they don't even have fangs. Perhaps they do just have a weirdo disease that makes them crave blood and blow up into flames when the sun hits them? Maybe because of the absence of the actual term vampire, we feel we can be more lenient on the curing a vampire issue. Plus there isn't anything that glamorizes vampires in Near Dark. What do you think? Does Near Dark commit a vampire taboo similar to the likes of Twilight? Or do we just ignore it because Twilight is the worst? You decide.
And now for the big reveal....what will the "scary moment" be...yes! Ding ding ding! I am correct.
Posted by Andre Dumas at 10:45 AM

Have you seen the new DVD of this with the "Twilight" Style cover?? Eeek!

I was lucky enough to catch this back in the 80's when I was crazy over The Lost Boys and Fright Night, and there's some interesting tidbits in its making (yeah, I spent too many afternoons obsessing over vamp film coverage in Tiger Beat magazine!):

Richie from Teen Wich is Joshua Miller, half-brother to Lost Boys' Jason Patric (related through their dad, Jason Miller of Exorcist fame). Kathryn Bigelow was married to Aliens' director James Cameron at the time of the film's making and that probably accounts for half the cast of Aliens being in Near Dark, LOL!

Yeah, the movie may have had a low budget which is why you didn't see fangs or glowing eyes, but hell -- these weren't vegetarian vamps, that scene in the roadhouse proved it! "Finger lickin' good" was used at the time in Kentucky Fried Chicken commercials, adding to the dark humor when Paxton's character said it.

I remember reading an interview in which they based the 'cure' on vampirism off of Mina's cure in Dracula -- blood transfusions. Perhaps because Caleb hadn't made his first kill, the transfusions worked for him, though that wouldn't explain why they worked for veteran vamp Mae.

Still, it's nice to see it finally getting some coverage in this day and age as it is a very well-done film, both as a movie and as a vamp movie.

Thanks for the review!

Chuck- I did see a comparison in my google image search. AWFUL.

Nicole- Hehe yeah I know all about Joshua Miller thanks to endless IMDB searches after watching Teen Witch over 20 times. Even still, I never remembered seeing Near Dark- mostly because like I said I had never really heard of the movie because people seem to seldom talk about it!

I know about Kathryn Bigelow and James Cameron too of course, although their relationship actually began after she made this film. She realized that by casting a bunch of Aliens veterans she'd probably have to get Cameron's consent at some point and gave him a call. Hence the start of their lovely relationship!

LOL! --- I can't resist talking about the Patric-Miller-Miller connection, especially since two were in great 80's vamp flicks and the dad was in like the daddy of horror films!

I didn't know that bit about how Cameron and Bigelow started dating -- I was a big fan of Aliens when it came out (still am) and just assumed they were married when she worked on Near Dark. Learn something new every day...

BTW, if I could look half as great as Kathryn Bigelow when I'm 3 years away from 60, I'll be very happy!

Love this movie - and Bill Paxton is HAWT with a upper-case "AWT".

I consider Bill Paxton's role in this to be my almost ultimate movie crush, second only to Viggo Mortenson in TCM 3.

And as for Joshua Miller, Andre, I implore you to check out Class of 1999, where he continues his reign as creepy kid brother with bad things ahead. Plus, it's the definition of a kickass '90s movie.

Ooooh thanks Emily I will have to check that out. I can't get enough of wacko Richie/ Joshua Miller!

One of my all time favorite vampire movies.

Rumors abound that they want to remake it and concentrate on the love story. NO!
What I liked about it was that the love story, used to draw you in, became the subplot for most of the movie.

I cried when Diamondback and Jesse blew up in the car. They were the couple I cared about.