Invasion of the Body Snatchers:My Long Awaited Return to The Donald. 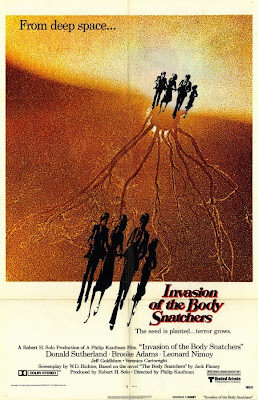 Thank goodness I didn't have to wait too long after the Olympics to get another dosage of the Donald! Let me be clear that the Donald usually makes everything better- and Invasion of the Body Snatchers is no exception to that rule. As classic and super as the original film is, it was surely a film that could use a nice reboot. Enter the Donald and Philip Kaufman's wonderful eye for awkwardly creepy things like priests on a swing. 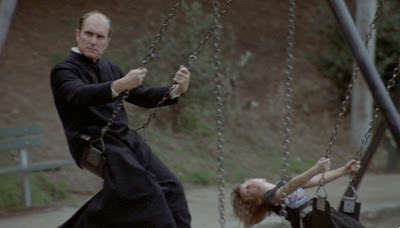 1978's Invasion took elements from the original and expanded nicely on them- giving us a more detailed look at how exactly the pods recreate humans as well as turning the ending sequence of realization and fleeing, into a full blown nightmare. Sure the film may not be perfect, but it's one of those great PG movies that just has you looking over your shoulder in the fear that those around you have changed.

Most things are the same like the storyline; weird alien plants have landed and slowly begin taking over lives by copying our bodies and discarding our remains. As is customary, not everyone is OK with this- and The Donald, Jeff Goldblum and two ladies (including Cathy from the Birds) attempt to resist the pods and try to escape with their lives. As the story moves on, we find that slowly but surely the pods have taken over the entire city and the true horror begins to unfold.
So what's different? Well for starters the pod people/ the pods have evolved into full blown characters and vital parts to the story. We get a sense, when we see the Jeff Goldblum pod person forming on the table in the mud baths, that the plants have a serious mind of their own. I felt when watching the movie, that the plants and how they recreated the humans made them stand alone as an individual character and massive presence, not too far from the likes of the Overlook Hotel in The Shining. The way that they form those spidery web like things just make you feel almost violated in the way that they work so quickly and so precisely. The scene in the garden in particular was incredibly unsettling, as those hairless fetal bodies just emerged, flexing their gross sticky fingers. I'd say it was definitely one of the more disturbing images I've seen in a while. 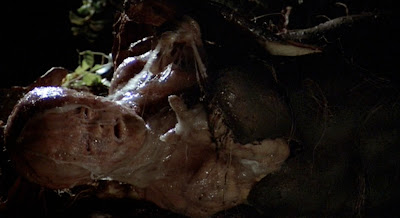 Or wait no maybe this is. 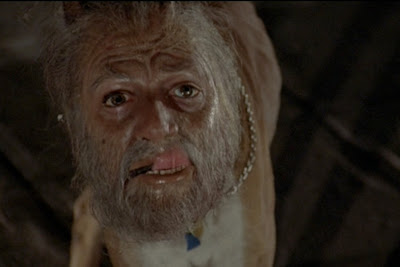 Another big difference that I really enjoyed- was getting a glimpse into the human remains. The original never really addressed this. There were people and there were pods- but what happened to the people once their bodies became complete pods?? The scenes with the garbage trucks, and the ending scene where the body just collapses into this heap of...well rubbish I suppose would be the best term, was really just great. Also great, was the fact that the pod people, when killed received notable damage. In the original the pod people really just seemed like wax- which they pretty much were, as evidenced when they were hurt. A tale of the times I'm sure, but I just loved how in the 1978 version the plants bled. It makes sense since plants are in fact a life form and therefore the pod people aren't any less alive than a real person. The remake does that well- giving the plants an actual life force, because that's what plants have. It actually makes you think and agree with the notion that if plants did take our bodies over- they would be exactly like us except for one crucial concept--the ability to feel emotion!
Now as for what minor downsides the movie has- I'd say it does run a bit long. The escaping and the fleeing gets sort of tiresome after awhile. Sure it is effective as it traps us further and further into the nightmare happening, but how many times does the Donald have to realize that nowhere is safe? Also, how did Nancy escape the pod people? What secret to staying awake well into the night does she hold?? Clearly taking 5 doses of speed wasn't enough so what is her secret!? I would like to know, and also she could should let Glen from a Nightmare on Elm Street in on that secret because we all know he is a gigantic failure that could use the help.
Overall a solid remake and just a solid film in general. It hits all the points of the original, and takes them further without greatly changing anything. The idea of the whole world and everyone being against you has never been one of my more desired nightmares to have- and this film perfectly sets the tone of complete and utter hopelessness. It also makes us wonder, if maybe the pod people were right and it is better to become one of them and not have to deal with any of those human shenanigans. Then again- I'd miss my cat too much. And chips. Chips are really good.
Buy Invasion of the Body Snatchers at Horror Movie Empire!
Posted by Andre Dumas at 11:09 PM

Great review. Have not seen this movie in a while.

Wonderful review. This movie scared the crap out of me when I was little. My grandmother gave it to me as a gift and I watched it without knowing what it was about. Needless to say, when in first or second grade, a movie like this is a real shock.

I liked how this version made the plant become the person, while in the original, it seems that once the plant matures, the human becomes possessed and the plant then dies off (remember in the original when Becky falls asleep in Miles' arms, and then opens her eyes, changed?).

This version of Snatchers is my preferred version. I don't think the fleeing scenes run too long, however. I always find it very tense and frightening to think that everyone outside my door (cabbies, cops, pedestrians) could be out to get me. I think that idea is better shown in this remake; no matter how far you run, you can't outrun the pod people.

I also distrust garbage truck drivers to this day.

The scene with the man/dog mutant was the most disturbing things in the movie, besides the ending with Donald pointing and making that scary scream!