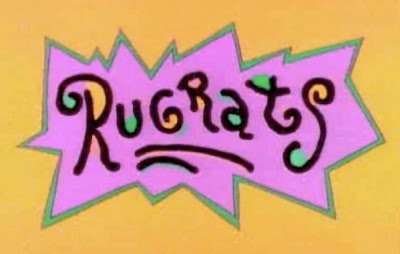 Hopefully it's no secret to you all now that Netflix has recently spewed out an amazing collection of DVDs that are all available to watch instantly. Not only horror movies have been part of this swing (hooray for Instant Watch Suspiria!), but a barrage of classic TV shows as well. If you grew up in the golden era of Nickelodeon, then you know about a little program called SNICK. And before you get too excited, no, Roundhouse has not been added to Instant Watch. 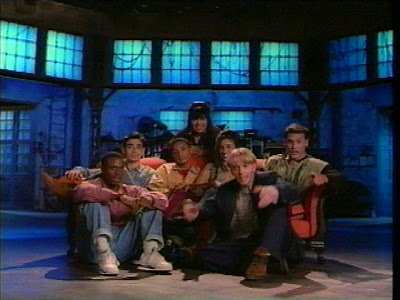 Side note: What the fuck was The Roundhouse about anyways? Someone tell me. Ahem. You should also then know about some amazing television programs, most of which happened to be cartoons. Rugrats, Doug, Hey Arnold, Rocko's Modern Life---they were cartoons with an agenda that didn't necessarily consist of teaching kids about morals. They held within them points that only adults would understand--and as I realized the other day, things that only a horror fan would understand.
I've mentioned this before when I took my horror hiatus and only watched comedies for a weekend, but horror is seriously everywhere. While sitting down to watch an episode of Rugrats, thanks to Instant Watch, I realized that the horror movie references were quite abundant. So for today's Quickie post, I give you some truly awesome horror references that were surely under my radar as a young kid and now dance wildly in front of my horror obsessed brain. Sure I was more of a Doug fan in my day, but until Netflix adds those, we'll have to settle for Rugrats.
REPTAR 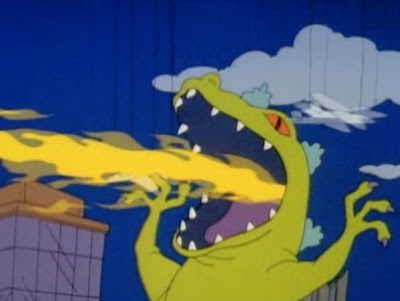 We'll start with the most obvious, Reptar was the babies hero. An obvious physical modeling after Godzilla, but also a not so obvious hero complex--Reptar had the unique trait of being the babies ultimate superhero. He destroyed buildings and ate people in all the movies about him, but then he would save the baby's in a different episode,(save them against a King Kong hybrid of all things) 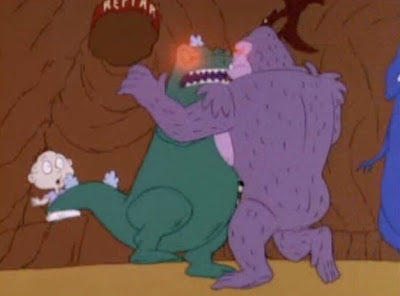 star in Reptar on Ice, 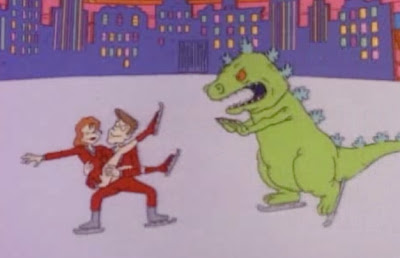 and be the poster child for cereal, 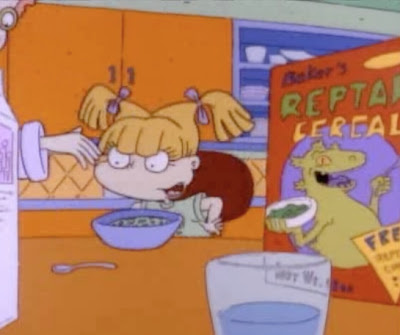 lunch boxes and candy bars.
His resume is quite fascinating and what I love most is how the babies connect so tenderly to him, despite his obvious horror connotations and history with violence and destruction. Which is of course true for many horror villains. An interesting phenomena if you ask me.
THEM! 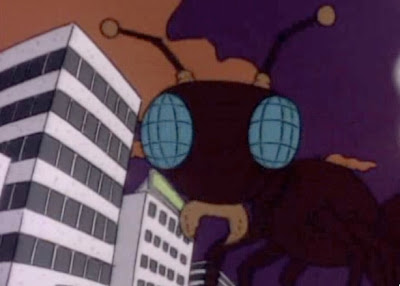 Certainly I wouldn't have caught such a horror reference back in the old days--and the concept of giant insects being in OLD movies was sort of over my head. But I couldn't help but smile when I saw this snippet of a giant ant terrorizing the little people. What makes it better is that Tommy and Chuckie associate Tommy's great Aunt with this giant Ant--and draw the conclusion that she too is an alien/giant bug. Pretty genius. 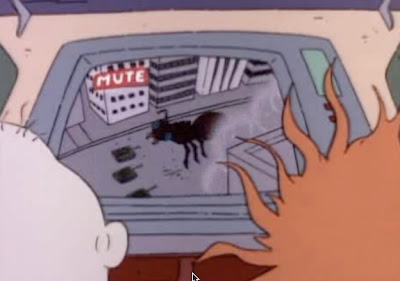 SCI-FI AND ALIENS
This isn't a reference really to the movie Alien, rather, Rugrats had several episodes that dealt with Sci-Fi themes and especially those dealing with aliens. In one memorable episode, Tommy imagines the house next door changing into a Close Encounters type space ship, 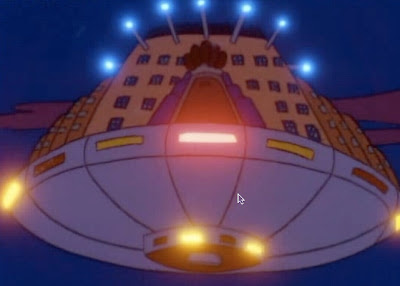 sending down a periscope that peers into Tommy's window, 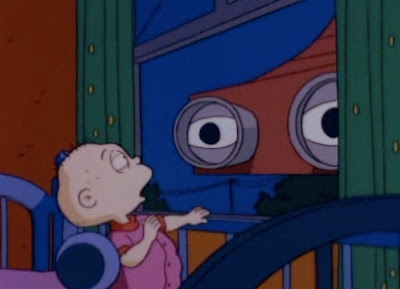 beaming him up--and bringing him into the spaceship in which the aliens are versions of his family. 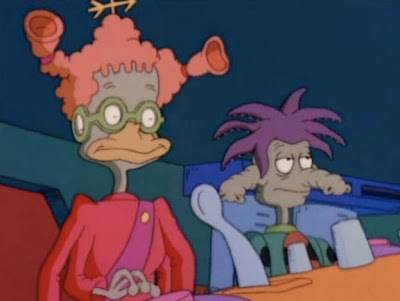 Kind of scary!
DRACULA AND FRANKENSTEIN
Any Halloween episode will most likely feature a handful of horror references, but I found something charming in the way that Tommy's parents dress as the two most notable classic horror icons. Dee Dee dons fangs, a cape, and what looks like more Bride of Frankenstein-ish hair to become a vampire. 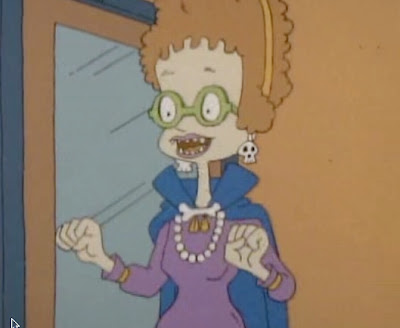 While Stu puts on his "Frankenstein flat top" to become the monster and does his best Frankenstein's monster walk out of the house. 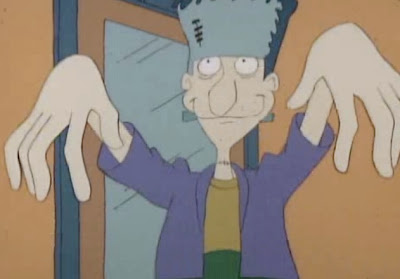 In a different episode, the intro has Tommy's dad downstairs in the "lab" dealing with some kind of electric current and a doll on the table. 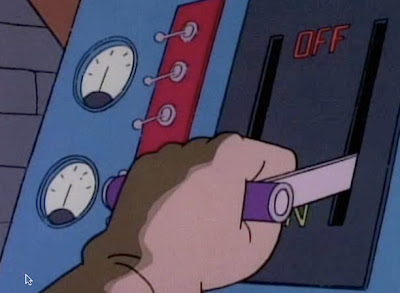 Once the currents go through the doll wiggles it's hand 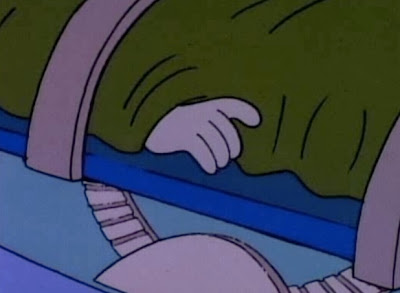 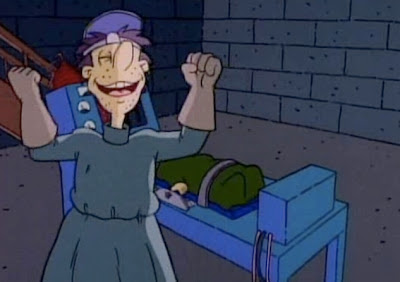 Another of Stu's failed inventions comes to life and once again homages Frankenstein!
A MONSTER UNDER THE BED
While not a direct reference, you can't deny the horrific power of a child that is afraid of what might be under the bed. In this episode, when Chuckie gets a new bed, Angelica shows him a scary comic book detailing a monster under the bed incident. Chuckie is of course, naturally petrified. During a sleepover with Tommy, the two decide to investigate once and for all to disprove the theory. What they find however is a startling discovery--- 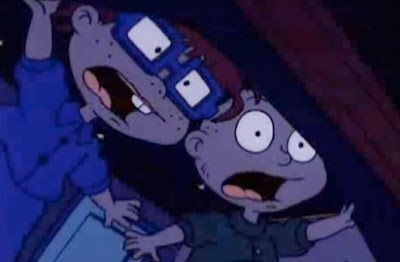 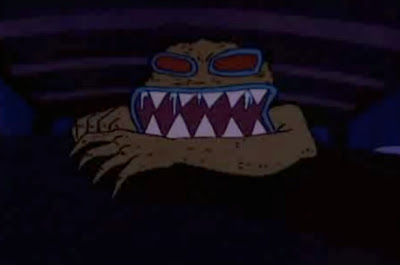 Turns out the "monster" was just Chuckie's dad's sweater! 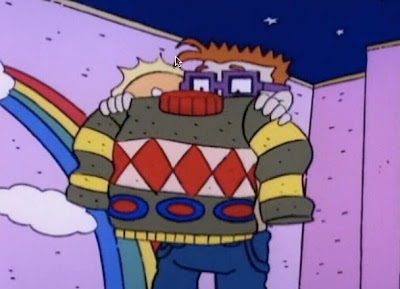 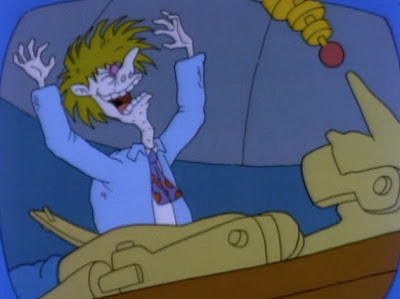 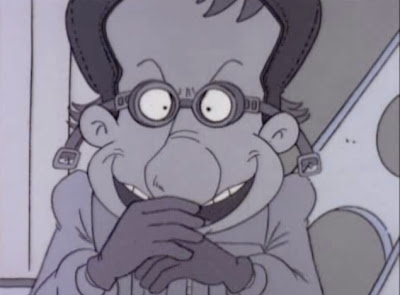 Ghosts/Scary Things in the Attic 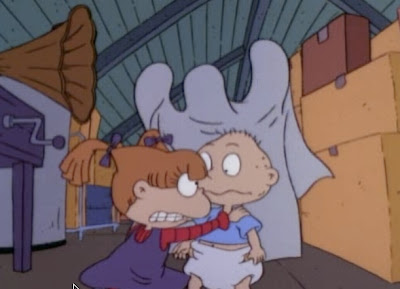 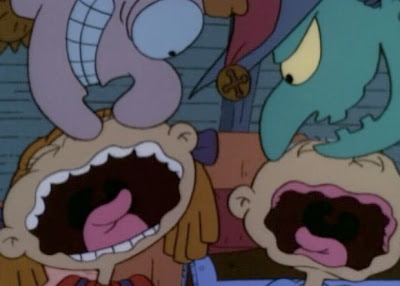 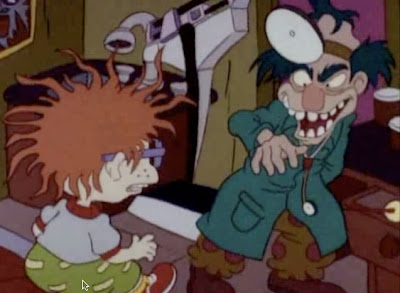 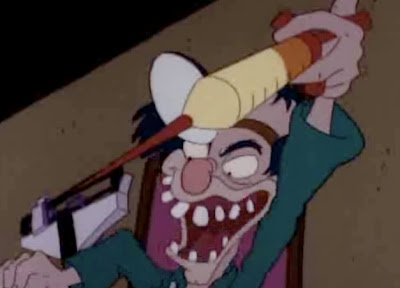 Wow, I had completely forgot about Roundhouse until I read this! What a weird show. It was probably the only show on SNICK that my brothers and I didn't watch.

I loved Rugrats, and I also never realized how very many horror references were included! I'm going to have to revisit the show now that it's available instantly.

I also was a bigger fan of Doug. I actually gave my brother the 1st season of it on DVD for Christmas. I bet there's some horror references in that show also (well, I hope at least)! I may have to steal it from him and check it out!

Phenomenal post, Andre, especially for two subjects that I would have previously thought to be completely disparate of one another!

You're dead on about the theme of horror that permeated the show. How deviously subversive of the show's writers to sneak in those little tidbits of terror.

Another great SNICK classic has to be ARE YOU AFRAID OF THE DARK. The first couple of seasons were sooo much better than Goosebumps.

All right, it is one thing to be so damn prolific but do you have to be entertaining on top of it?! Nobody likes a show-off Andre!

So great. I actually chuckled, recalling some of the images. I was never big into Rugrats (being all old and stuff, probably) but I sent this link to a friend who was a huge fan. He should be going ape right about now.

... I so need to reactivate my Netflix, ASAP.

Emily- I am patiently waiting for Doug to be on Instant Watch, but I guess you can buy it on itunes! I'll probably be making that purchase soon when I'm drunk. Doug DID have horror stuff, in one episode he goes to see a scary movie but feels like a wimp when he closes his eyes. The movie is great so many cliches. I love it.

SK- Thanks! I actually did a post or two on Are You Afraid of the Dark a while ago, detailing my favorite episodes. It should be under the category Are you Afraid of the Dark! My love for that show knows no bounds. Sooooooooo amazing--and actually, still scary!

DDD- You've only been my best friend for like a day, wait till you go back in time and read some other posts...there are some gems. I would recommend, "Disappointing Google Search Results and April Fools Jokes I could Have Fooled you with. These and MORE found under the label, "Important Things". Let me know when you've finished. JUST KIDDING. But actually not, I am tooting my own horn and proud of it.

This was a really great post. I remember the Halloween episode of Hey Arnold was a parody of the panic caused by Orson Welles' adaptation of "The War of the Worlds". The whole city mistakes a Halloween prank set up by Arnold and Gerald as an actual alien invasion. Hey Arnold is also on Netflix Watch instantly and would be a fun watch if you're going back and watching these old classics.

I think you forgot the episode where Chuckie became fearful of germs. He had a nightmare germs were coming after him. Then he wore a mock up of a hazmat suit from things found in the garage to protect him from germs.

That episode seemed to have many elements based off body horror movies, as well as horror films about catching horrible gruesome diseases. It was well done for a kids cartoon.

My favorite Rugrats moment, is when the family visits the carnival, and Angelica goes on a thrill ride. After it's over she stumbled out with a dazed look, and when Dee Dee goes over to Angelica, Angelica says "Hi Uncle Stu" lol.

I also have no idea what Roundhouse was supposed to be about. The issues they dealt with at the time concerning teenager issues, were rather controversial for the station from what I remember. I do remember my mom said I shouldn't watch it, which of course made me want to watch it more lol.

Oohh good call. There is no doubt I forgot that and other's, as this was just a quick off the top of my head recounting of some references I remembered!

In the episode about MR Fiend zombie movies are referenced. More specifically Peter Jackson's DEAD ALIVE. Toward the end Tommy takes out a load of the zombie figures with a toy lawn mower.

Did you notice that the doctor in those last two pictures was named Dr. Lector?

Also, Rugrats was littered with what I suspect is an above average amount of "horror" episodes where the babies are scared of monsters and other scary things, a few of which you referenced.