[REC]: Why It's Better Than Quarantine 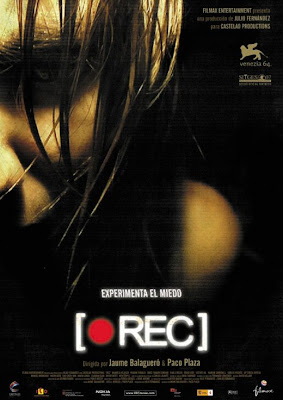 I think it's a major shame that Quarantine became readily available in the US before [Rec], as it will no doubt prevent less enlightened viewers from watching the original.

I wish you had been able to see [Rec] before Quarantine, as I think it would have made it an even better experience for you. Cleary you enjoyed it and I'm glad to see you got so many positives out of it, but I think having seen Quarantine first will have lessened the impact for you a little as it was such a straight remake so no real surprises.

Keep up the good reviewing, I always enjoy reading your opinions :)

LOVE REC! I saw it before Quarantine and one of the biggest differences that a lot of people don't seem to notice is the camera work. REC is shaky cam perfected and nothing feels forced or fake. The tension built from not being able to see every little detail is amazing and when you are able to see something, it is very natural to a person holding a camera. Quarantine, on the other hand, felt so off and didn't have a realistic flow about it. It was just too convenient and never felt immersive at all.

Great review and the only thing I disagree with is I liked the girl in REC much more than Carpenter's character. She was made out to just be some typical movie bitch and just something about her character rubbed me the wrong way. Plus, Angela's accent was wicked hot when she got pissed and spoke fast! So I may be biased.

You are probably right. I couldn't remember if Jennifer Carpenter got as hysterical as this lass did- but I remember thinking that she was also annoying so Im guessing they were equally hysterical and therefore annoying. I kind of hate Jennifer Carpenter because her facial expressions are too intense all the time! It's like how your mom and dad used to tell you that if you kept making a certain face it would get stuck that way--well Jennifer Carpenter's face is stuck in the Exorcism of Emily Rose face! And it's scary.

Good stuff!
I agree. If possible watching '[REC]' before 'Quarantine' would be the way to go. It's really too bad that the ONLY reason Quarantine was made was to deliver the story in english to Americans...

I do have to disagree about the downtime in the middle (and to a lesser degree at the beginning of the film). The fatal flaw of "found footage" flicks in maintaining a sense of realism is one that works against traditional suspenseful storytelling. You need moments of downtime to realistically portray characters continuing to use the camera. If the dramatic tension rises to quickly or stays fever pitched for too long, I would not believe that the characters would bother trying to document what's happening. It's one of the small problems I have with 'Cloverfield', an event THAT catastrophic would pretty much guarantee my dropping the camera.

I think the main thing working in [REC]'s favor though is we are unfamiliar with the performers in the film. I have a much lower suspense of disbelief hurdle to jump to continue watching the movie. The actors in Quarantine are all pretty recognizable (I've ever worked with a few), so I don't buy that this is really "found footage".

I wish I had seen REC first as well- but I'm glad I could still take some good stuff out of it! What do you mean you've worked with some of the actors in Quarantine before??! Who who who!?

I'll add my vote to the others saying that you'd have enjoyed it more if you hadn't seen Quarantine first.

The middles section would probably be a whole lot more tense and exciting if you didn't really have a clue where the story was going. I really don't remember being bored by it for a moment.

Oh and the first time I saw the fireman-falling-down-the-stairwell shot I jumped out of my seat.

I totally avoided Quarantine and every review, publication, blog that discussed [REC], waiting patiently to see it. After my "very long wait" on the queue, I was totally psyched to finally get it.

Glad I did because it was a powerhouse of an experience, even forced to watch it on my little computer.

I've seen Rec but not Quarantine. Not sure I'll ever see Q. Is there even a reason to?

I would say no Jaded! Quarantine really brings nothing new to the table just be glad you've only seen rec, I am jealous : (

I lacked CHris patience and ended up seeing Quarantine in the theaters. While I really enjoyed the film, i wish I'd waited to see the superior [REC] first.

One of the issues I had with Q is it contained main characters I recognzed from other projects. BWP and PA work so well becuase i've never seen those actors in anything else, and that allows for a more willful suspension of disbelief. With Q I found myself saying "Hey it's the dude from Hostel" or "Man I wish Dexter's sister would stop screaming like a banshee".

I liked the main firefighter in Quarantine more than in [Rec] he was just more badass with that sludge hammer haha. But that whole thing about demonic possession is way crazier than a stupid doomsday cult. And they explain it more in [Rec]

You guys are all idiots watch quarantine then rec, rec sucks it isn't even in English and not even as dark and scary as quarantine and the actors are just way better in quarantine

You guys are all stupid the acting in quarantine is better, its darker in the building, scarier and just overall better