I have good news for you if you live in the Boston area...OR if you feel like driving to the Boston area. About 2 blocks away from my apartment is the Coolidge Corner Theater. 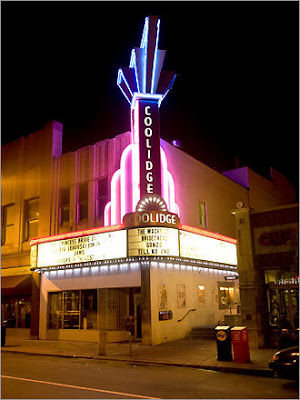 An amazing little independent theater that showcases independent movies, good movies, and best of all--wonderful midnight showings of some of the most spectacular movies out there.

This October, I have teamed up with The Coolidge Corner Theater in order to promote the great events happening throughout the month. These won't kick off officially till October begins but I figured it best to start letting people know ahead of time and also letting you know how my blog will be celebrating and bringing you the happenings all at once. It might get a little intense, it might get a little bit messy. But here goes.


Nightmares on Harvard Street
The Films of Wes Craven 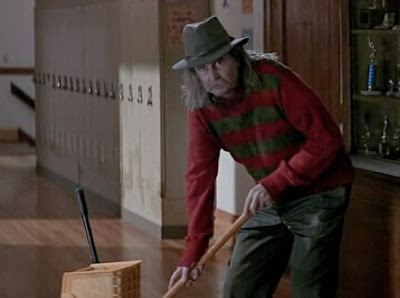 Almost every Friday and Saturday night in October at 12 AM that's right, MIDNIGHT, The Coolidge Corner theater will be showing a Wes Craven film. Every week I will be writing a post coinciding with the movie that is being shown that week. This means double the underwear because it's going to be double the excitement. The schedule is as follows.

October 8th and 9th: THE PEOPLE UNDER THE STAIRS

October 22nd and 23rd: A NIGHTMARE ON ELM STREET

October 29th: THE SERPENT AND THE RAINBOW

Tickets are priced at 9.75 for these midnight showings and all prints are 35 mm. I can think of few other people I would want to spend October with than Wes Craven, and so should you. 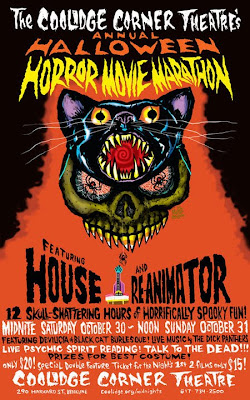 Now for the REALLY exciting stuff. Starting on October 30th at Midnight and going until Noon on Sunday is the Halloween Horror Movie Marathon. For $20 you get to enjoy 12 nonstop hours of horror. Come see Hausu (House) and Re-Animator on the big screen. Be apart of history as a real psychic does a live spiritual reading for an audience of 400 people. Experience Devilicia and Black Cat Burlesque and hear the vibrant sound of the Dick Panthers. Aside from House and Re-Animator there will also be 4 other films shown that you'll have to see for yourself.

Out of money? Fear not because I will be giving away 10 FREE TICKETS to the horror marathon right here on this blog. The contest will start October 1st with details to follow. Keep checking back here for more info and fun stuff as the events gets closer and closer to happening.

Oooooo, this is so exciting! If only I lived in the Boston area. I'll have to see if it's possible for me to get up there at some point in October- I mean, it's not like I'm that far away!!

Super cool! I'm actually going to be in Boston in October, but not on a weekend, sadly, just a Monday and Tuesday. Shame, I'd love to see Re-Animator on the big screen!

Yeah Emily that would be awesome! Drink a lot of coffee and come see one of the Wes Craven films, I'll meet you there.

That sounds amazing! Shame I live in the borin ol' UK :(

Andre, that is pretty cool. I live in Michigan and there is a small local theater that shows lots of cool old flicks. In October they plan to screen An American Werewolf in London, A Nightmare on Elm Street, Poltergeist, The Shining, The Lost Boys. All fun flicks on the big screen.

Makes me wish I lived on the East Coast!

I had no idea you lived in Boston! That's amazing, the Coolidge is a great theater and a wonderful venue for this. I'm going to try to make it one night for sure.

Awesome Alex! I think you make my 4th Boston reader...hehe.