Deathdream: If Someone Dies, Let Them Go. 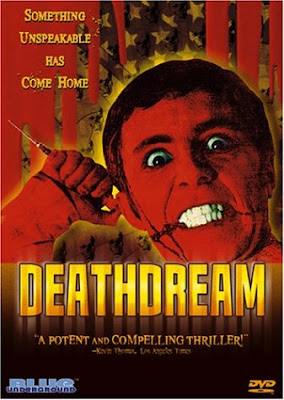 I hadn't really heard much about Deathdream before putting it on my Netflix queue. In fact, I'm assuming I had heard nothing. My only prompts were its almost 4 star rating and that Bob Clark directed it. Clark, most notably known for A Christmas Story and to us horror nerds for Black Christmas, Clark is clearly a man of many talents. He is one of few directors that has the strangest assortment of different genres to his name. Don't forget he also is responsible for Baby Geniuses (1 AND 2) yeah....weird. Anyways.
Deathdream is about a family who recently finds out their son Andy has died during the Vietnam War. The mother distraught with grief and general craziness, spends the entire night wishing him back to life. As luck would have it, the family awakens in the middle of the night to find Andy standing quietly in the living room apparently alive. It is not long however before they start to realize that Andy has come back as a very, very different person and possibly one who is dead.
Another film with at least 10 different titles including Dead of Night, which my DVD came with. I'm not sure I can agree with any of these titles as they all suggest a certain mediocre way about them. Deathdream in particular is slightly misleading, as it forced me to believe that I would be watching Jacob's Ladder's younger brother. Fear not, that is not quite the situation. Deathdream is more closely aligned to the short story The Monkey's Paw by W.W. Jacobs. Plus it's pretty obvious that Andy is dead.
I wouldn't say that I necessarily found the movie to be terrifying or even a little bit chill inducing. This film seems to fall under a different category involving more of a deep sadness. The obvious message here is that soldiers are changed people when they return home from war. Often times this message gets misinterpreted as saying that soldiers are monsters which is a load of crap. One of my biggest annoyances with this world is the general public's unwillingness to examine the actual metaphor. They see what they want to see I suppose. In any case, the war seems to be the true villain here, and we find ourselves saddened at Andy's returned state and how it affects his family and those around him. Powerful stuff if you ask me. There's also an extremely powerful line that goes something like, "I died for you, why can't you die for me?" which Andy says right before killing someone. That actually was a rather chilling moment now that I think about it.
There are attempted scares though, and the film does an interesting job of creating a strange zombie/vampire hybrid when dealing with Andy. What he is, is never explained and it doesn't need to be. It's more important that we just realize how he has changed. I was a bit surprised at how quickly he turned from being semi normal to suddenly looking like a piece of rotting cheese though. 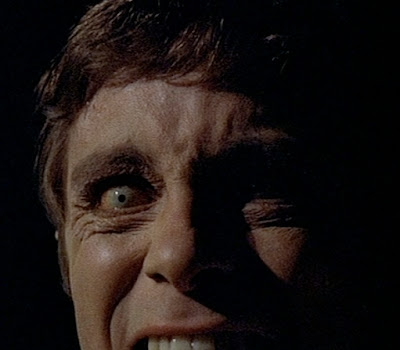 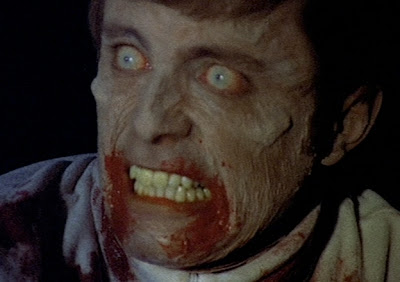 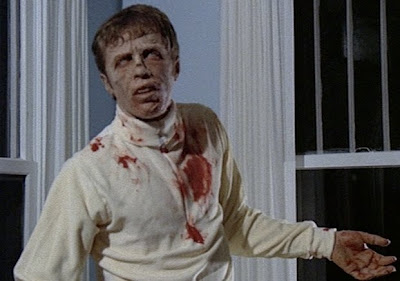 Not to say the makeup isn't extremely effective, quite the opposite as I felt it was maybe the best part about the film in terms of its scare factor. Tom Savini of course is responsible, and as a matter of fact, Deathdream was actually his first job as a special effects artist. I guess I just wished there would be more suspense and fear inducing moments rather than just OH SHIT he ate someone and his eyes look scary, ya know? Suspense gets attempted, but it never really seems to make it there. One scene involving the Doctor growing worried and suspicious of his surroundings definitely tries this, but the scene instead gets bogged down by an annoying music score and takes much too long to happen.
The film as a whole ends up being a little bit on the boring side. I found myself unaffected by the many scenes of Andy rocking in his rocking chair and just starring with his cold and empty look. Effective for the first time maybe but after awhile it became pretty clear that that was the most he would be doing. I would have enjoyed seeing other ways that Andy seemed different, ways not having to do with killing people or....dogs. Maybe just a few subtle hints here and there. It would also have been nice to find out what the hell happened. Since the army already notified the family that Andy was dead, wouldn't they be contacting them about the missing body or something? Finally, I would have liked to get a better hint of the kind of person Andy was before he returned home. Clearly he was not a zombie but we know virtually nothing about his character before he stumbles home and it'd be nice to get some sort of comparison somewhere.
Sure there are good moments involving a pretty narsty stabbing with a large needle, which apparently leaves a blood splatter pattern like this on the wall, 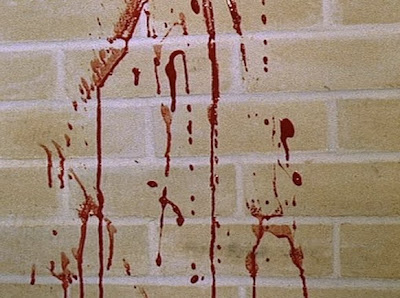 as well as a very cool and strangely surprising murder of a truck driver early on. 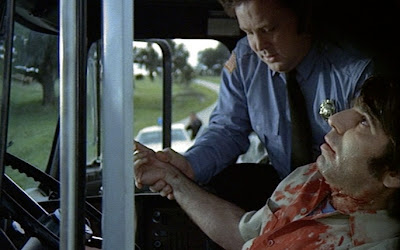 For the most part however I just felt kind of eh. Great message, a great sadness is evoked, but as a horror movie, Deathdream could be better. Andy's long and cold stares are a bit unnerving but it's all the dude really has. I do love his sunglasses though. 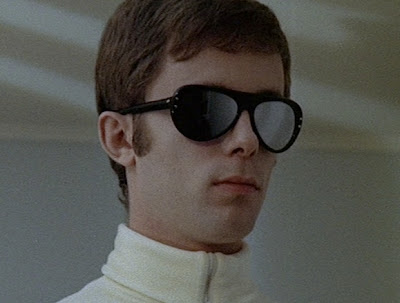 Labels: Not bad not great, Zombies

This review is dead on!!

I saw this movie years ago when we first got cable...I seem to recall enjoying it. Going to Netflix it and see if it holds up.

THE ONLY thing I still remember is the final scene of the mother sitting rocking and saying, "Andy's home" (at least that's how I remember it).

Great stuff, Andre - I've been a-hankering to see this for some time now; ever since I read it was a loose adaptation of The Monkey's Paw by W.W. Jacobs (which I adore), via the Vietnam War. Must actively seek it out.