My tiring quest to watch The Devils began when I was researching Bravo's 100 Scariest Movie Moments. The film is not on the list, but it is talked about on AMC's Scariest Movie Moments and Scenes list, which is a site I used more frequently to generate my must see list. Upon coming up on the little paragraph about The Devils, I was floored by the picture of naked nuns in a complete frenzy. 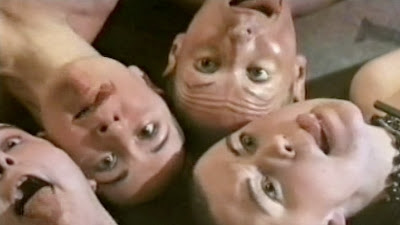 Reading the little synopsis on why it made the list drove my interest home.
In this sadomasochistic story adapted from Aldous Huxley's "The Devils of Loudon", there were numerous scenes of orgiastic and crazed, nude, head-shaved nuns, including the exorcism of the wicked, sexually-repressed, and deformed (hunch-backed) Sister Jeanne des Anges (Vanessa Redgrave); also the frenzied scene of the climactic torture / burning at the stake of the promiscuous rebel priest Father Grandier (Oliver Reed) as the crazed, self-righteous priests shouted out: "Confess. Beg forgiveness" to which Grandier responded: "I am about to meet the God who is my witness. And I have spoken the truth"; as his pyre was lit, the hysterical priest cried: "May your body be consumed by eternal fire" - as his body was licked by flames without the benefit of being strangled first.
Orgiastic nuns? Yes please. It's not that I had a sexual drive to watch nuns strip and frolic and rape a statue of Jesus, it's just that...watching nuns strip and frolic and rape a statue of Jesus is not something you see everyday--and certainly not something you see in a 1971 film that isn't porn. The film is also regarded as one of the most controversial films of all time. When people offend religion...serious shit goes down. I had it in my mind that watching The Devils would be like watching 20 nuns being exorcised at the same time while in a crazy naked frenzy. Luckily that is pretty much the case, but the story is so much more interesting than all this naked nun business would have you believe. 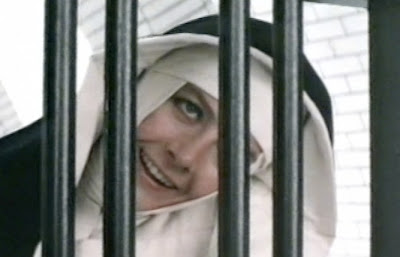 In the small French town of Loudon, the women are entranced by Father Grandier, a priest who seems to pay little attention to that whole no sex thing. Apparently the women thinks he's the sexiest thing since sliced bread--I mean they're right, 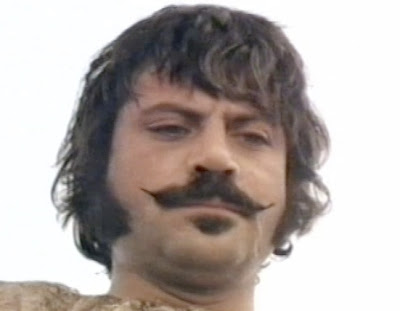 right? Well that's debatable at least. Anyways. Deformed hunchback Sister Jeanne, (Vanessa Redgrave!) who is the head of the local convent, makes it very clear that she is secretly obsessed with Grandier. While watching him pass by, she hides in a tiny room and quietly writhes and sweats as he passes. She masturbates in a fevered frenzy, and fantasizes about doing the nasty with him. When word reaches the convent that Grandier has married a woman, she becomes livid and inadvertently accuses Grandier of seducing her with the devil's charms. 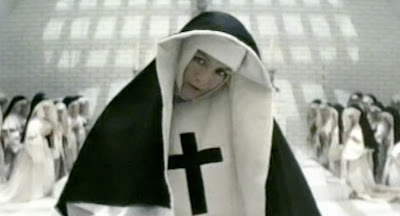 It is not long before the town and a "professional" witch-hunter becomes involved, and they try to exorcise her demons. The other nuns join in to protect themselves and Sister Jeanne from being excommunicated causing the church to be run amok with naked nuns exclaiming about devils. Grandier is put on trial as the town gets wrapped up deeper and deeper in its mess.
There is a whole other element of course, dealing with the political and religious ratifications as implemented by Cardinal Richelieu's influence over Louis XIII. This is important after all, as Loudon remains the only town unwilling to have their city destroyed in favor of eliminating all Protestant threats. Bringing down Grandier is their #1 priority, and convicting him of consorting with the devil is a fine plan indeed. 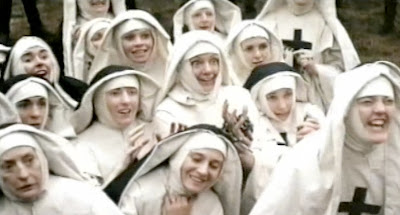 The thing I was most surprised about is how watchable the movie actually is. With a movie like this, I expected the only enthralling thing to be the famous nun orgy, but I was quite wrong. The performances are pretty outstanding in this, and even though Oliver Reed creeps me out as Father Grandier, you cannot deny the strange allure he seems to possess. Vanessa Redgrave however easily steals the show. There are few things I have seen that have resonated more with me, than seeing Vanessa Redgrave appear through the door with her back hunched and her head tilted to the side in some kind of grotesque beautiful way. 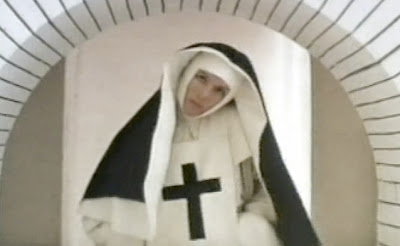 Her hateful vengeance as acted out on the other sisters and then seeing her enter the secret little closet and masturbate as Father Grandier approaches, practically made my head explode.
Everything that leads up to the famous orgiastic scenes creates anticipation, but what we see along the way is still captivating. This is perhaps what makes me feel saddest about this film is that because of the harsh censor ships, barely anyone has even seen it--and it is a great film. I should have mentioned this earlier but one of the reasons I had such a hard time fulfilling my desire to see this film has to do with how difficult it was to track down a decent copy. The only way it seemed possible was by ordering some bootleg copy from London. Still fuzzy on how that whole bootleg/ being arrested and fined a million dollars for pirating works, I decided it was best to wait. When the film was originally released it was edited down so much that entire chunks of the film were missing. I didn't want to risk getting a copy without all the good stuff, so my worry and anticipation increased even more. About a week ago I discovered a $5 copy of the film on Amazon, which promised the original 111 minute version, restored and containing interviews with the director and actors. Clearly my wishes had been granted. The quality isn't very good, but who really cares when the possibility of seeing naked nuns frolic on a church altar is imminent!?
One thing I was not expecting was how beautiful and breathtaking the set pieces and some images would be. There are moments in The Devils that just cry out my name. 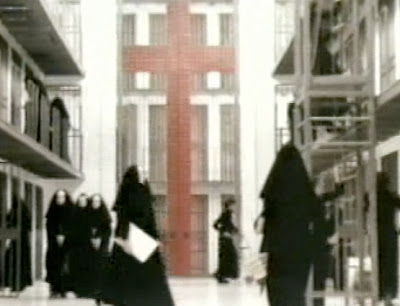 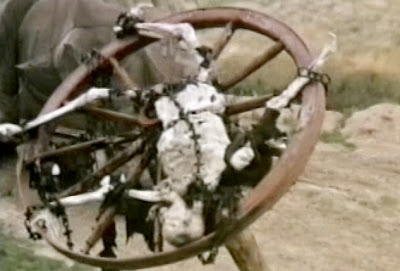 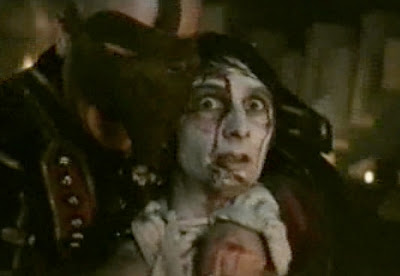 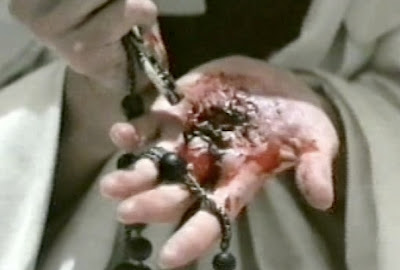 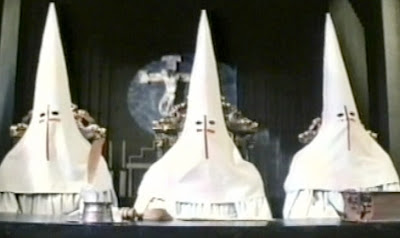 Towering crosses, suggesting Gothic influences and inklings of the devil in a setting where the devil is least wanted. It once again just boggles my mind. I love this film, I love all the shouting, and the head shaved nuns, and the naked nuns literally swinging from the chandeliers. 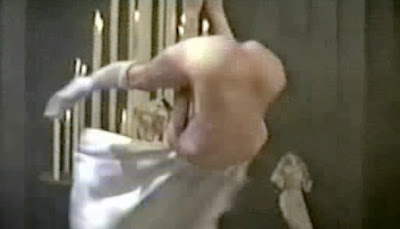 It's like I wanted posters of the entire process plastered all over my room and I don't care how many judgmental looks and stares I receive.
Now brace yourselves because the part when I talk about the nun frenzy has arrived. Was it everything I had imagined it would be? Hardly. And by that I mean that I could never have guessed how utterly ridiculous it would be. Forced enemas, naked bodies grinding all over a Jesus, no matter how well I describe it you won't believe what it happening until you see it for yourself. Aside from the nun debauchery, there is also all sorts of other ridiculous happening as well! From Louis XIII's opening dance number, 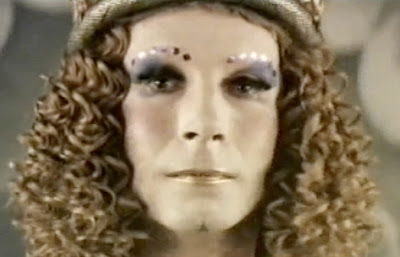 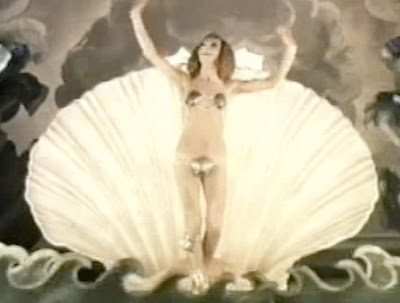 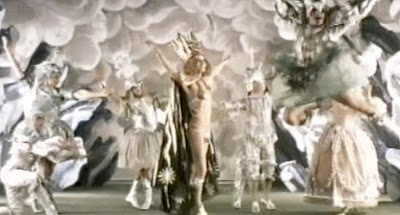 to his shooting Protestants game, 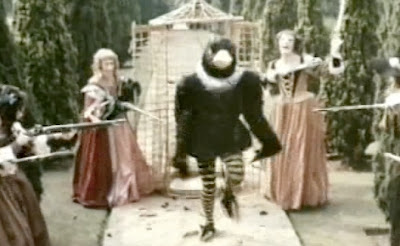 to the town's crazy ways of celebrating executions....it is really all too marvelous.
The films climax is powerful and surprisingly brutal. Who know the true way to destroy Father Grandier was by taking away from him the only thing that made him appealing? 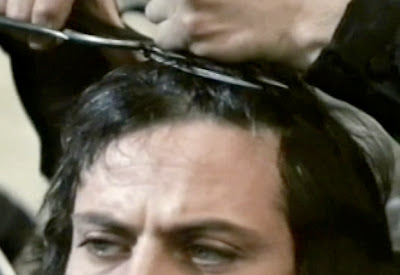 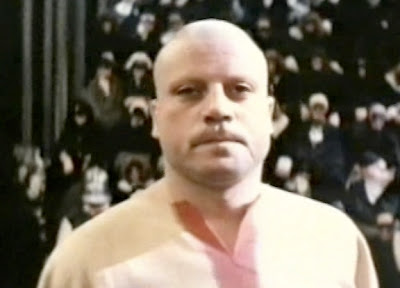 Overall, The Devils is a delight of a movie. Not for everyone I'm sure, but it's worth watching at least for the infamous nun debauchery, which earned its status of one of the most edited films of all time (Is that true? I half made that up. But probably true). And if your interest surpasses nun debauchery, you'll find intrigue in the films compelling story. An interesting combination of historical account, and complete artistic freedom. I urge you to seek it out, and uncover a piece of cinematic history that's slowly making it's way back to the light.
Posted by Andre Dumas at 9:10 AM

How is this movie not talked about more by horror fans?

Because we're still waiting for any sort of DVD, I guess.

It's also based on a true story, and has a more interesting twist on demonic possession (not to mention a more blasphemous one) than THE EXORCIST, which only slouched along two years after THE DEVILS!

Yes definitely the lack of distribution is the culprit. I got my copy of the "restored, uncut" version on Amazon marketplace for 5 bucks. I think it's still missing a few scenes however, and the quality isn't the best. This needs a re-release like nothing else!

I have never seen this one, and will seek it out. I have heard of it, but that's all.

Read the title and opened an ebay tab... A couple of paragraphs in and I'd found a copy to buy.
This thing looks great.

You had me at "nuns raping statue of Jesus"!!